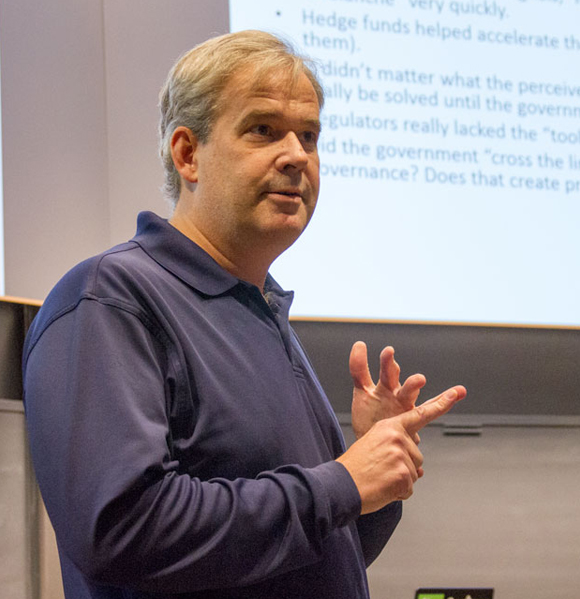 The roots and repercussions of the financial crisis of 2008 will be debated for years to come. David Erickson, an operating partner at Bessemer Venture Partners, shared his thoughts on the crisis, as well as advice about careers in finance, at Yale SOM on November 6 in an event sponsored by the Private Equity and Venture Capital Club. Erickson was head of global equity capital markets at Lehman Brothers when the crisis hit.

I think some people didn’t recognize the signals early enough. They had gone through situations in the past with financial crises, whether it was [the 1998 collapse of hedge fund] Long-Term Capital Management or other things, and were emboldened by surviving those situations. So as a consequence, when the crisis really got moving, after Bear Stearns went down, it was too late, given the concentration of risk, and there weren’t many tools available to solve the problem until the government stepped in…

We’re going to go through another financial crisis. I graduated from college in 1986, and we’ve been through two big real estate problems that led to crises in the financial system, one in the early ’90s and then in 2008. So it seems like it’s every 20 years, and it could be accelerating just because of the size of the global markets and the size of the financial institutions.

So how do you prevent it from happening again? I’m hoping that some of you will be in a position the next time a crisis comes around to make some policy decisions and think about these things. Here are the things that I would say we need to do.

Sovereignty also needs to be addressed. What does that mean? Well, in 2008-2009, the financial crisis really didn’t impact Asia to the degree it did in the U.S., or to the degree it did in Europe. So, at the time, you had the Chinese banks, the five largest Chinese banks, that had just been capitalized in the public markets and had really not expanded outside of China yet, being the largest market cap banks globally, and to a large extent they still are.

But when the financial markets seize up, a lot of it is accelerated by the cross-pollination between banks. It’s derivative contracts [between the banks], for example. So next time, as an example, if the crisis is in Asia, and as Chinese banks have expanded globally and probably have  billions of swaps with European and U.S. banks, and the Chinese bank hypothetically experiences serious financial problems similar to what the banks in the U.S. and Europe experienced in 2008, the question is, will the governments in some of those markets let that money leave the country, if they have their own worries about their own liquidity crisis? And because we still lack a global regulatory framework, I think some of those issues need to be on the table as we move forward.

Third, I believe we need to deconsolidate many of the banks. I personally believe the largest banks globally are still too big and in too many businesses. To reduce the risk to the financial system, some of these businesses need to be dispersed, similar to what has happened with the commodities, where most banks have exited and sold these businesses to non-banks.