The Dallas Business Club is a unique organization comprised of 27 alumni chapters from some of the top business schools around the world including Yale, Harvard, Wharton, Chicago, MIT and INSEAD among others. The more than 3,000 members of the DBC enjoy professional networking and development, engagements with prominent business and political leaders, and the opportunity for civic involvement through a program called Civic Strides Connect that seeks to match the talents within the Club with the 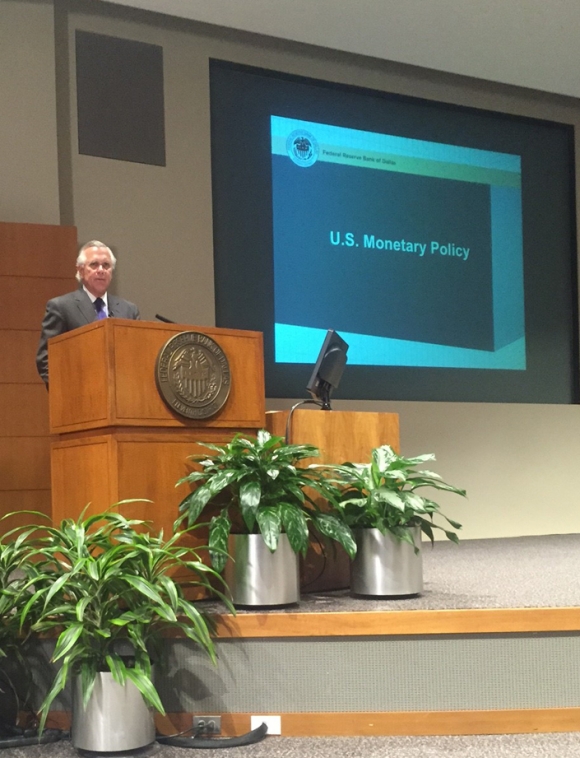 needs of local non-profit organizations. Shortly after graduating from SOM and moving to Dallas, I joined the DBC and later served on the board of directors and as the Club's 2014 president.

On Wednesday December 3rd, we hosted an event featuring Dallas Fed president Richard Fisher who offered his final economic outlook for 2014 to an audience of MBAs and members of the press corps at the colossal Federal Reserve Bank building downtown.

Before Mr. Fisher offered his formal comments, though, he acknowledged that unlike many of his fellow central bankers, he is not a trained PhD economist.  Among his many educational endeavors at the Naval Academy, Harvard, and Oxford, he noted that his Stanford MBA "prepared [him] best for [a] career as a banker, a money market operator, and for the past decade, a policymaker at the Federal Reserve."  His studies at the Naval Academy best prepared him for the sleep deprivation experienced during the Financial Crisis.  He also graciously took time to remind the audience, and me personally, about the score of The Game where his Harvard Crimson toppled our Bulldogs yet again, making it 13 of the last 14 meetings.