A couple of weeks ago I received an email from the SOM Latino Leadership Association saying that the former President of Colombia, Mr. Alvaro Uribe, was going to visit the School of Management and that the club would be hosting a lunch with him. They wanted to know if I would be interested in attending the event… Are you serious? Having lunch with President Uribe?? This is a once in a lifetime opportunity! Count me in! 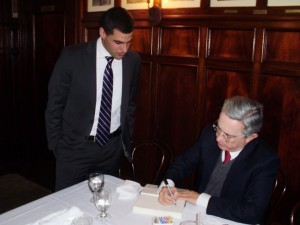 We had lunch at Mory’s, a private club founded in 1849, which is exclusive for the Yale community. I have to say that the lunch went very different from what I was expecting because I thought it was going to be more like a one way conversation where the former president was going to share his experiences and tell us how he helped to change Colombia from being one of the most dangerous countries of the region to one of the most visited places by tourists, but it was nothing like that. We had a 3 hours talk with him where we had the opportunity to ask him questions and discuss with him our view of the challenges that Latin America faces nowadays…. How cool is that? One of the things that I like the most about studying at Yale School of Management is that I have had the opportunity to meet and interact with important people from the politics and business world. Since I got here I have met Mr. Robert Diamond (former CEO of Barclays Bank), Mr. Xie Ping (Executive Vice President of the China Investment Corporation), Mr. Steve Hickey (Partner of CVC Credit Partners), Mr. Gita Wirjawan (Minister of Trade from Indonesia), additionally, I have attended conferences with Senator John Kerry and Nobel Prize winner Daw Aung San Suu Kyi. Having had the opportunity to meet these very interesting people and listening to them has helped me develop a better understanding of the challenges that the business world faces today and I am confident this will help me become a change agent in today’s globalized world where countries are more interconnected than ever before.