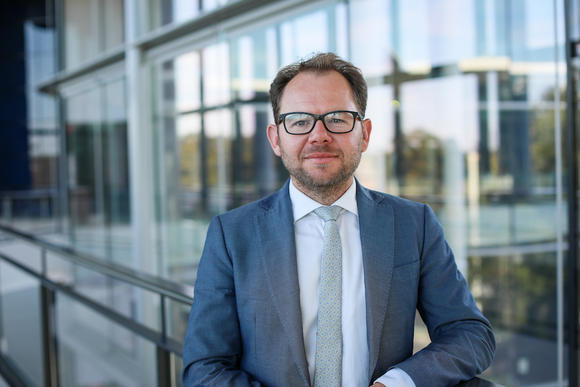 Clint Bartlett ’17 says that Yale SOM’s loan forgiveness program was a crucial factor in his life and career. A graduate of the Master of Advanced Management (MAM) program, he says, “There’s no way I could have come here without the loan forgiveness program,” which provides repayment assistance for alumni working for government and nonprofit organizations.

Just as important, the program allowed him to continue his work in the impact investment arena, using financial tools to expand opportunities in his native South Africa. “Loan forgiveness meant that I could go back to South Africa and not have to worry about loan repayments,” he says.

After graduation, Bartlett got an additional source of support for his career when he was selected as part of the second cohort of Jacobs Fellows at Yale SOM. The fellowship, created in partnership with the Swiss-based Jacobs Foundation, provides additional financial support for loan repayment and entry into a worldwide network of young people working for social impact, with a focus on education, inclusive development in Africa, and impact investing.

Bartlett grew up in South Africa as apartheid came to an end, and his career has been shaped by an awareness that the psychological, social, and economic scars of the apartheid period run deep. “The economic inequality remains a profound challenge to this day,” he says. “So most of my career has been focused on how finance and society impact one another, and how we make the overlap more positive.”

After getting his MBA at the University of Cape Town, he came to Yale for the MAM program, which gathers graduates of schools in the Global Network for Advanced Management for a year of study with a focus on global leadership. “It instilled another level of confidence, that I could go out into the broader world beyond Southern Africa and interact on a global stage.”

His MAM classmates provided an “unbelievable network of people,” he says. “One of the benefits of the MAM is that it allows you time to build up relationships” with young leaders from all over the world.

After graduating from the MAM program, Bartlett founded African Impact Advisory and Foundation in Cape Town, guiding both nonprofits and for-profit companies with an interest in making a positive impact. Two years later, he moved to London in order to try to influence how capital can be more impactfully allocated to Sub-Saharan Africa.

His travels have demonstrated the power of the Yale network, he says. “I consistently advance the idea that Yale can be a tremendous force for good,” he says. “And whenever I meet Yale alumni, which is often, that assumption is affirmed.” The network is particularly helpful when moving into a new role in a new city, he adds. “It gives you momentum as you enter a new domain and a new society.”

In the meantime, he was accepted to the Jacobs Fellowship. As a Jacobs Fellow, Bartlett travels to Switzerland annually to meet with colleagues from Yale, MIT, Berkeley, Oxford, and other universities. “You have young, dynamic, hugely committed, motived, super bright people that are coming together to solve problems, in a highly resourced environment that encourages you to flourish,” he says.

The fellowship provides another network, layered on top of his network of Yale classmates and other alumni, he says. “It opens up an entirely new family for you to grow in.”

About the Jacobs Fellowship

Each year, three alumni are selected for the Jacobs Fellowship program. Alumni may apply to the program through the Loan Forgiveness Program portal in November.

Learn more about the Loan Forgiveness Program and the Jacobs Fellowship at Yale SOM.