Using Business to Shape the World for the Better

The Global Network for Advanced Management has been in the works behind-the-scenes for some time, but to the students, Global Network Week exchange program was new and still felt experimental. To most of us, it was little more than an abstract concept, a cobwebby diagram we’ve seen in PowerPoint presentations. In contrast to the traditional and highly reviewed International Experience (IE), signing up for Global Network Week (GNW) South Africa felt like a risky move. I signed up anyway, as part of the first ever class for this location. Looking back though, I had no idea at that point that I was about to embark on the most amazing, unforgettable, enriching international experience I have ever had. 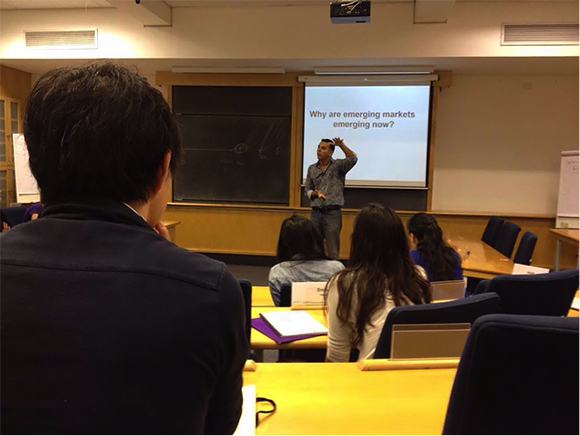 Catapulted from a snowy New Haven winter, my Yale classmates and I walked right into a warm, shorts-and-sandals breeze at University of Cape Town Graduate School of Business campus, just a stones throw from the waterfront. My new GNW classmates were MBA students from over 15 countries, representing industries ranging from Canadian mining, to Brazilian textile operations to indigenous Australian labor rights to Japanese biotech applying amoeba acid compounds for malnourished infants in Africa. In class, we all sat facing South African-native professor John Luiz, our guide for the next five days on the topic of “Economics of Emerging Markets.” Right away, Professor Luiz plunged into a series of intellectual, passionate lectures, pouring into us the complex history of the South African politics and its impact on its economical development. Masterfully, he brought our fall core course concepts to life, weaving them into captivating narratives that explained the development of various countries. The energy in the classroom tingled with learning and purpose, reminding many of us (still recovering from a semester of grueling classwork) of what had inspired us to pursue an MBA in the first place. Economics concepts clicked in our minds through his lectures, like the rewarding feeling of puzzle pieces snapping into place to form full pictures that we now had the capability to see.

Some of our highlights of our week include: