When Tim Jarvis was asked to recreate polar explorer Ernest Shackleton’s trip in a small sailboat from Antarctica to South Georgia, he knew he needed a strong team. Not only would the team be required to call upon their expertise to guide the vessel to the island, but they would be doing it using period equipment and clothing, all while being filmed for a Discovery Channel program. 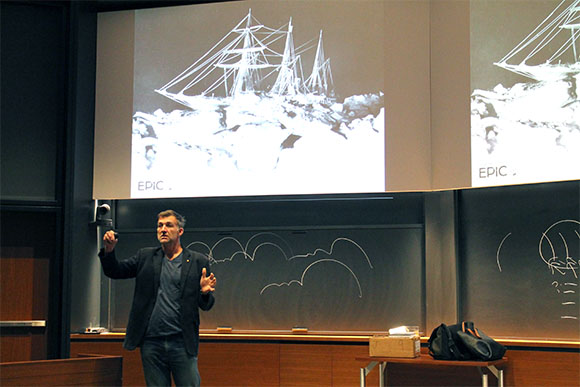 “What I wanted was people who were pragmatically optimistic about our chances,” Jarvis, a former Yale World Fellow and senior associate for sustainability at ARUP, said during the Master of Advanced Management Colloquium on March 24.

The Colloquium series allows MAM students to meet with leaders and executives for candid discussions on a variety of issues. This year’s series has included Howard Dean, the former governor of Vermont, and Douglas Houlihan, executive chief engineer and South America product leader for the General Motors Company.

Expedition planning is not unlike business management, Jarvis said, in that it requires leaders to place trust in their team. Jarvis said that it’s important to test your team as much as possible ahead of a major task. Jarvis worked with his crew in teambuilding exercises for nearly two years before heading to Antarctica.

Part of that process was selecting teammates who questioned Jarvis’s leadership prior to the expedition and his process along the way, he said. That questioning allowed the team to take the problems they faced and break them into smaller, manageable pieces.

“It’s tough if you’re a leader and you’re not demonstrating forward momentum. Leaders are always required to have the next move or plan to keep confidence that you’re in control of the circumstances,” he said. “Even if you’re not, you need to have the outward appearance that you are.”