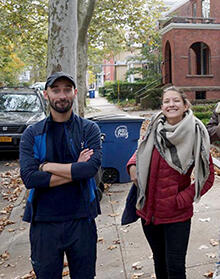 Ann: Have you ever met someone that you instantly clicked with? Do you have this person in your life that seems to be able to read your mind? Well, that’s what Karsten is to me. Apart from the fact that he is an outstanding human being, he just...gets me, in a way that hardly anyone else does. He is one of those people that you can put into any environment and they’ll fit right in. He has a way of making everyone feel welcome and heard, he has so much to give, and he never asks for anything in return. Oh, and he is also super fun to be around and always up for hanging out (very good qualities to look for in a best friend).

“Because Ann is so, almost frighteningly, in sync with me and where my head is at, she somehow manages to also bring out the best in me” —Karsten Torp ’20 #SOMBFF

Karsten: Having been brought up on the notion that we’re all unique, you can imagine how much of a shocker it was to find someone who is basically you—but in a slightly better version (don’t tell Ann I said that, or she won’t let me hear the end of it). And exactly because Ann is so, almost frighteningly, in sync with me and where my head is at, she somehow manages to also bring out the best in me—as well as in everyone else, now that I think of it. Making the most of a bad situation and standing strong in the face of adversity? Ann has it all down, and then some! Questionable sense of humor and the ability to always either end up as (or at least near) the life of the party? Check! Combine this with the fact that her usual jolly self is ludicrously contagious and you have a sure-fire recipe for having an absolute blast all day, every day. Coming to SOM, I honestly couldn’t have asked for more.

How/when did you meet your #SOMBFF?

While we are both from Master’s Degree in Global Business and Society (GBS) program Class of 2020, we attended different schools prior to Yale and met at the beginning of orientation. (Karsten is originally from Denmark, but studied at HEC Paris before coming to Yale, and Ann’s lovely home country is Germany, where she attended ESMT Berlin.) Those first days at a new school, in a new country, with new people all testing the waters and trying to find their place, is such a thrilling time.

There have genuinely been multiple conversations trying to narrow down exactly when and how we went from not knowing each other at all to being thick as thieves. Frankly, we don’t even fully understand what happened ourselves. One of the first nights during orientation, everyone met for a drink to get to know one another before the semester kicked off, and over the course of the evening, we played a few games—and next thing you know, we’re basically inseparable. Over the course of the semester we ended up in more classes together than would be worth trying to count, went on more trips together than our wallets could really sustain, and ended up arguably spending more time with each other than without each other.

How has this friendship enriched your life?

Ann: Karsten has always been there for me. Even before he knew me as well as he does now, he was always there when I needed it the most. If it was by walking away from a night out at Gryphons because I was grieving the loss of a family member, by smothering old insecurities creeping their way into my newly built self-esteem with ice cream and hugs, or talking me through the stress of recruiting for consulting, he was always my person, and I don’t know how I would have conquered SOM without him. Having someone who is on the exact same wavelength is the greatest gift in the world. No matter what, I knew I was never going to be alone. Whether it was something trivial like going to Boosters on a Wednesday night or planning some spring break traveling, I always had my partner in crime. And even though we haven’t seen each other since last summer, we still talk most days. Sometimes it’s just a consulting meme, sometimes an elaborate conversation about the future of the U.S. electoral system (for two non-U.S. citizens, we are very invested in this). But we can still talk about anything and everything.

Karsten: I honestly think I neither fully comprehend nor fully appreciate how much this friendship has enriched my life. All I know is that a not insignificant part of what has guided me to where I am today is our friendship. From banter during classes to journeying far and wide–in large parts through the culinary scene in New Haven (and when I say culinary scene, I’m really only talking about the various flavors at Ben & Jerry’s)–from driving toward jobs and career and focusing on cultivating deeper relationships, I know that, at least on my end, the time at Yale would not have been half as rewarding as it was without Ann. And while this has all become increasingly difficult during COVID and given the 6,000+ kilometers between us, the wonders of modern technology continue to serve us well. Our regular calls are some of the highlights of my week. 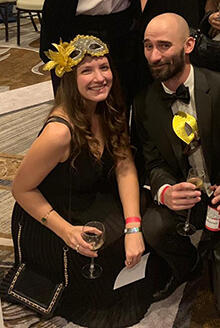 Do you have a favorite SOM memory that solidified your friendship?

Definitely too many to choose from, so let’s offer up a selection: weekly (let’s be honest and call these almost daily) Ben & Jerry’s runs; Thanksgiving with the family; introducing ourselves to random people during Closing Bell, or whenever else we had the chance; our Puerto Rico “honeymoon”; laughing until 3 a.m. in the morning during a road trip to Virginia Beach for no reason at all; playing Catan during quarantine; playing cards in the front yard, drink in one hand, snack in the other. Or maybe our ability to share a simple look, letting each other know that we are having the exact same thought—and people getting increasingly frustrated and annoyed because two of us together could really just become utterly unbearable. There have definitely been significant moments in the beginning of our time at Yale and throughout where we have been able to trust and lean on each other, deepening the bond between us and solidifying our friendship.

Do you have a #SOMBFF story you want to share? Email us.