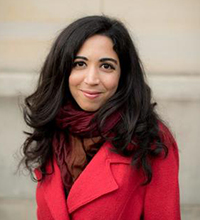 Emily Esfahani Smith is a writer in Washington, D.C. Her book The Power of Meaning was published in 2017 by Crown and has been translated into 16 different languages.

The former managing editor of The New Criterion, Smith’s articles and essays have appeared in the New York Times, Wall Street Journal, The Atlantic, and other publications.

“Emily Esfahani Smith’s incisive journalistic eye brings new light to the questions of meaning, helping us understand why they have become a more central focus in life,work, and the functioning of our communities”  – Amy  Wrzesniewski

This event is open to the public. Registration is required.

Emily Esfahani Smith is no stranger to existential pursuits. When she was growing up in Montreal, her parents ran a Sufi meetinghouse, a meditation center where people would regularly gather. As a child, Smith was surrounded by people who were seeking purpose and meaning in their lives.

Eventually, her family moved out of the meetinghouse to the United States, where she noticed that people were much more concerned with the pursuit of happiness than the search for meaning. “This idea that a happy life is a good life dominates our culture—it’s natural to think happiness is the solution to problems like depression and emptiness, but it’s really more of an existential issue,” Smith, a journalist and author, told an audience of students, staff, and faculty during a Poynter Fellowship Lecture at the Yale School of Management on April 23.

Smith’s talk was moderated by Amy Wrzesniewski, the Michael H. Jordan Professor of Management, whose work on how people find meaning in their work  informs Smith’s reporting and the research in her recent book, The Power of Meaning. Wrzesniewski agreed that finding meaning and purpose—both in life and in work—is deeper than just finding what makes you happy. She noted that the movement around positive psychology—much of it centered on a simplistic idea of happiness—often dilutes the conversation, reducing what should be a more complex discussion about creating meaning into “three tips that can improve your day.”

“While that’s part of it, that’s not all of it. It’s not just the experience of positive outcomes that can make work meaningful,” said Wrzesniewski, adding that people find meaning in the communities they build at work and the types of projects they work on.

Smith and Wrzesniewski agreed that it can be a disservice to oneself to conflate happiness and purpose with traditional ideas of success. Smith’s reporting has found that people who attain financial success and who reach conventional milestones are often left feeling without a true sense of purpose, let alone happiness.

“People who are highly ambitious have had these real, painful moments of reckoning, and some were never able to reconcile the life they led with the life they had wanted,” Smith said. “Humble lives that are just kind of ‘normal’ are some of the most meaningful ones you can encounter… One of my friends says he finds meaning in making scrambled eggs for his daughter every day. It gave him a sense of purpose to have that daily involvement in her life.”

Wrzesniewski said it takes courage to eschew traditional ideals of success, but that the payoff can be real: you can find a stronger connection to your work. “In a conversation with students earlier today, we talked about an opportunity that maybe everyone is really excited about, but that may be different than the opportunity that you’re really excited about. No one else may understand why you’d want to do that… [Figuring out] what you actually want can take a while to sort out, but it matters.”