What a pleasure to collaborate with the Yale ICF and put together a blockchain webinar series!  Over the past few years since I graduated from the Yale School of Management and became immersed in this new industry, I’ve experienced first-hand some very fast-paced and crucial developments in blockchain and financial technologies.  Along the way, I’ve met many fascinating people with valuable insights, whom I will be interviewing throughout our YBlockchain? series– stay tuned, this is only the beginning!

September 8th was our first episode in the webinar series titled, “Blockchain & Illicit Activity: Demystifying Assumptions & Lessons Learned for Financial Innovation.”  I started with this topic to address some very common questions regarding the credibility of blockchain and cryptocurrency innovations, given that the early stages of this space were marked with scandals.  Over the course of the fall, the upcoming episodes will continue to cover topics related to these risks and how they have been addressed as the space slowly matures.

It was great to interview Greg Lisa, Partner at Hogan Lovells US LLP, specializing in financial technology, and former organized crime prosecutor for the Department of Justice.  Greg served as Interim Director of the Office of Compliance and Enforcement at the Financial Crimes Enforcement Network (FinCEN) and was the US Treasury Department’s lead regulator for anti-money laundering.  He walked us through the reasons behind Bitcoin’s dark reputation, its promising and legitimate use cases, and with a very business school-like mindset, covered four case studies.

The first uses of the Bitcoin network were for payments, and criminals were among the early adopters to fund their illicit activities.  As with many new industries including the Internet, criminals have proven to be great beta testers looking for ways to move money in novel ways.  For Bitcoin, we saw this through the Dark Web, terrorist financing, drug deals, and tax and sanctions evasions – events that made headline news, and even a Trump tweet that may have briefly caused the price of bitcoin to drop.  Yet as Greg noted, cryptocurrency may not be fully anonymous but pseudonymous – there is no apparent connection between a name and an account as we have in traditional finance.  This is not to be confused with a lack of traceability in moving money.

The first of the case studies that Greg covered was about Jong Woo Son and the website that at its height operated the largest volume of child exploitation content.  Most of the payments were in virtual currencies.  While Bitcoin was used to help facilitate this dark net marketplace, it also provided the tools for its undoing by giving investigators a road map to follow the money, identify the main perpetrator, and charge the hundreds of users around the world.  There is no way that a traditional system would have allowed mapping this “spider web” of illicit transactions.

The second case study covered terrorist financing campaigns where Al Qaeda, ISIS, and Hamas provided instructions on how to donate to them in cryptocurrency.  Here again, the blockchain served as a public ledger to trace these terrorists.

In the third case study, Greg spoke about the recent Twitter hack, in which the accounts of major companies and famous people (e.g. Kim Kardashian, Kanye West, Bill Gates, and Elon Musk) all tweeted a request for bitcoins, often promising to send double the amount in return.  These transactions were traced in real time, and some even halted at the exchange level among more compliant exchanges with the capacity to block suspicious fund flows before they reach their destination.  The 17-year-old behind the entire operation was charged with 30 felony charges, all in a matter of a few weeks, whereas typical cyber intrusions can take years to unravel.

In the final case study, two North Korean hacks of various cryptocurrency exchanges took various cryptocurrencies, converted them among one another, and laundered them through intermediate addresses to eventually convert them in to bitcoin, which is easier to liquidate than other “alt coins” out there.  Law enforcement was able to use advanced analytics to unveil this “chain hopping” operation, cluster addresses by patterns of activity and determine relationships between wallets and the perpetrators behind them.

Greg also noted that sophisticated tools like privacy coins, mixers/tumblers used to layer transactions, and non-compliant exchanges may add more steps to the process of identifying suspicious wallets and their owners.  Yet all the transactional information is on the ledger.  Blockchain records provide three important attributes: reliability, immutability, and accessibility of data.

On the other hand, in traditional contexts, complex criminal investigations like organized crime, drug cartels, and human trafficking rings can be very difficult to investigate.  The data to bring these cases to light may not be reliable because documents can be forged, witnesses can lie, and foreign bank accounts can be inaccessible.  Greg provided an anecdote of a professional money launderer, essentially a “glorified accountant” with deep knowledge and respect for international boundaries, who knew all the cracks in the system to operate without getting caught.

As this emerging industry evolves, not without challenges, we can hope to rely on more tools to improve credibility and trust, so that innovations can truly be implemented as solutions that will ultimately improve people’s lives.  For instance, today’s hot topic in the space is the remarkable innovation in DeFi, a technological movement to decentralize financial services, institutions, instruments, and use cases.  While speculation and hype have also brought cases of illicit finance, it is key to step ahead and think through adequate governance structures and regulatory reactions, so that the problems being solved can be addressed in sustainable ways.

Visit the ICF Events webpage to find out more about upcoming YBlockchain? webinars. 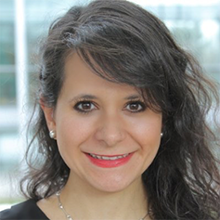 About Diana Barrero Zalles ‘17: Diana Barrero Zalles advises on blockchain innovation, crypto fund investments, and regulation. She has identified best practices and developments from around the world and compiled recommendations for effective blockchain legislation and business models. She also contributes to Global Digital Finance working groups to standardize best practices. She published market research on stablecoins and is working to advance tools in the space in light of decentralized finance developments. Previously, she managed large cross-border transactions with the investment banking offices of the World Bank and Inter-American Development Bank in Washington DC. She went to the University of Notre Dame and has an MBA from Yale.