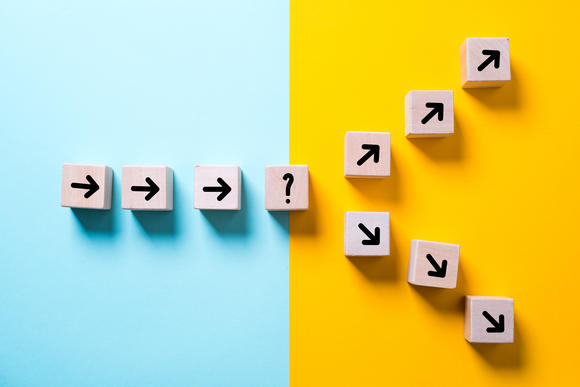 The consumer journey is filled with switchbacks and dead ends. We want a new laptop so we talk with friends. We read online reviews. We sample options at the store. We weigh and consider the various features of many brands. We negotiate with ourselves, coming up with arguments and counterarguments and fanciful justifications as we pinball among the possibilities until, finally, the purchase gets made — a period at the end of the sentence.

That, anyhow, is one way to think about choosing among options. Here’s another way: “a beginning rather than an ending,” write Taly Reich of Yale SOM and Sam Maglio of the University of Toronto. “As such, it becomes possible to view decision making as an action that initiates a cascading series of further events.” Once a choice is made we have to live with that choice. Was it the right one? Do we regret it?

It becomes possible to view decision making as an action that initiates a cascading series of further events.

In a new investigation using this lens, Reich and Maglio look specifically at the interaction between how people make decisions — deliberatively versus intuitively — and their contentedness with the outcome. They find that when people make decisions based on how they feel about something they are generally happier with and more willing to defend the result.

The researchers used seven different studies to explore this question. In one experiment, participants were given three squeeze balls and allowed to choose the one they liked most. Half of the participants were asked to use “intuitive, gut feeling;” the other half “deliberate, rational analysis.” After making a choice, both groups were presented a fourth squeeze ball. Those who had made a choice based on feelings found the new ball less comfortable, implying “feelings seem to inoculate against threats to choices,” the researchers write. “Participants who followed their feelings more readily found fault with a newcomer in response to direct experience with [it].”

This result was reinforced across several dimensions. Those who selected a digital camera using intuition expressed less regret than those who approached the choice rationally. They also extended less credibility to negative reviewers of the camera, dismissing them as incompetent. In another experiment, people who chose a task based on intuition were more inclined to perform a similar task in the face of negative feedback. In short, people who “relied upon intuitive feelings in selecting among options proved to be more resolute protectors of their choices,” Reich and Maglio write.

But how far does this effect extend? Though untested, the implications are intriguing: Might people be more likely to stick to their exercise commitments and less likely to skip a monthly contribution to their investment portfolio if they choose those options based on their feelings? On the other side, should people be careful to use deliberation when making choices in a dynamic context, where frequent reconsideration is necessary? “While our results suggest that these possibilities should hold water, our window of investigation remains somewhat limited,” the researchers write. (They do offer the qualification that feelings-based decisions are likely most valuable in domains where the chooser has some experience and knowledge.)

And for choice architects instead of consumers, whether in marketing or elsewhere, this study suggests options should be presented in a way that encourages intuitive rather than deliberative choice: use pictures not words; make information easy to understand and process: use color not black-and-white. These simple adjustments could give people more conviction in the choices they make.

In the end, “when approaching decisions, people often stick with the conventional wisdom that prescribes a reasoned, deliberative approach,” Reich and Maglio write. “The results of seven studies propose that this inclination may not be in their best interest, or at least not in the best interest of their choices.”