January 2020, a new year. Great masses of people making their resolutions, sharing them on social media, repeating them like mantras, writing them on sticky notes that they place above their beds. No doubt there are commitments to lose weight and get fit, and no doubt many—even most—of these internal promises will wither and fade.

Improving personal health is difficult for many reasons, from the behavioral and psychological to the social and economic. People tend to set unrealistic goals and then suffer from predictable discouragement.

But Kosuke Uetake of Yale SOM and Nathan Yang of McGill University recently investigated one promising approach for helping people reach their health objectives. By analyzing user data from a weight loss app they demonstrated that small, incremental goals support people on the path to achieving their overall weight-loss targets—a finding that resonates far beyond the world of diet and health. 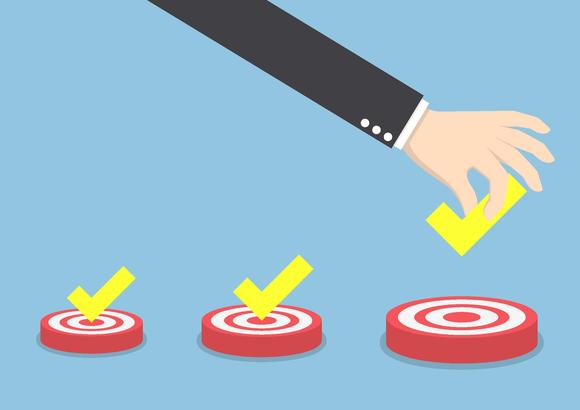 Uetake and Yang collected information on roughly 36,000 people who use the weight-loss app, Lose It!. The app works with people to set individual goals and then has users input what they eat as well as how much they exercise. (This latter variable can be pulled from any smart device that tracks movement.) The app then calculates total caloric intake for the day and matches it against a daily budget.

In the most basic analysis, the researchers looked at how users’ calorie counts matched against their daily budgets. They found a dense cluster of users who landed just below their budget, suggesting that “short-term goals may act as effective targets or reference points.” As people near their daily limit, they rein in consumption or increase exercise to avoid overshooting. A second important relationship they found is that those who achieve their daily goals are more likely to reduce calorie intake and increase exercise in the future. Meeting goals may, thus, create a positive feedback loop.

From this foundation, Uetake and Yang built a model to explore how small variations in goal design can increase motivation. They found that adaptive goals, which get more or less challenging over time, are particularly helpful for motivating people who either recently experienced setbacks or have made significant progress—those at either end of the achievement spectrum. They also found that people with the highest BMI demonstrated the greatest progress when given challenging goals. “In other words,” they write, “personalization can be a helpful instrument to change the behavior of those who likely need the behavior change the most.”

Though this work and its findings are rooted in weight loss, Uetake and Yang make clear that they “believe our goal design strategies can be extended to other (consumer) education settings where goal design is important.” They list several other contexts in which short-term goals, if properly designed, could improve long-term outcomes: debt repayment, employee training, energy conservation, and schooling, for instance. Proper goal design could also help motivate employees to meet targets. In general, small goals that adapt to individuals could benefit anyone pursuing a task that requires “discipline, restraint, and self-control,” they conclude.