It’s been fantastic to coordinate a discussion about financial innovation and policy implications with Michael Casey, Chief Content Officer at the crypto media platform CoinDesk, and Kyriacos Kokkinos, Deputy Minister to the President of Cyprus in matters of Research, Innovation and Digital Policy.

We started with a basic premise that historically at a global level, the United States has innovated products, Asia has imitated and built on those innovations, and Europe has been a first mover in regulating innovations.  Fostering innovation is a key factor to promote the competitiveness of an economy, and the world is grappling with important questions of how to promote blockchain innovations while upholding standards to ensure they will benefit society and not be abused by bad actors.

As Kyriacos pointed out, regulation can be challenging to implement without posing constraints and impediments to innovations.  The EU, in its efforts to regulate the emerging blockchain space, should not “over-regulate,” although finding ways to “right-regulate” has posed questions that are yet to be answered.  Blockchain is taking on an increasing role in the global economy, with functionalities that enable faster international payments, less costly transactions, and encourage trade between nations.  Yet its disruptive force makes it controversial in contexts that are heavily driven by incumbents.  The EU, along with many nations, still has a way to go in defining how to position blockchain, both by regulating it correctly and adopting it within a regulatory context.

At an EU wide level, there is an overall need to be more decisive and disruptive in these matters.  Yet within the EU, Cyprus, Estonia, and Malta have been taking the lead toward supporting and regulating blockchain innovations.  Often small countries are the most agile to test and experiment innovative initiatives.  Cyprus has established a National Blockchain Strategy, approved in 2019 by the Ministerial Council, and is actively making progress to launch a regulatory framework and develop a fintech innovation hub that focuses on blockchain technology.  Meanwhile academic institutions have embraced blockchain as a high priority in their agendas, with the University of Nicosia being the first to introduce degree certificates verifiable on the blockchain.  Throughout these initiatives, however, Cyprus is also carefully establishing the right safeguards to prevent these innovations from being abused by bad actors and address money laundering concerns.  It is conducting a national risk assessment on the relevant risks consistent with the recommendations of the Financial Action Task Force (FATF) in order to guide informed decision making with established principles of anti-money laundering and countering the financing of terrorism (AML/CFT).

Mid-tier countries, like Austria, Denmark, Finland, France, Germany, the Netherlands, Spain, and Sweden, have attempted to take regulatory developments with some degree of sophistication but more work has yet to be done.  Belgium, Croatia, and the Czech Republic have shown to be more reluctant.  It is important for EU member states to come together in a more decisive and disruptive manner in the approach to blockchain innovations, which will not go away and therefore must be dealt with effectively.

Despite the intent to be innovation friendly, the nature of the EU, with different member states under a single federal body, also poses challenges to implement harmonized regulatory frameworks as quickly as needed.  The European Central Bank (ECB) as well as all member state central banks, need to be decisive to find the right balance between over-regulation and under-regulation.  The Markets in Crypto-Assets (MiCA) proposed regulation, which largely deals with stablecoins, likely in the aftermath of the concerns raised by Facebook’s initial stablecoin attempt, is expected to become a mandatory regime in a 4-year period.  Kyriacos Kokkinos considers this to be too long of a timeframe to get regulation right, especially when there is significant movement toward industry standards from the bottom up, that is, from the innovators themselves.  Moreover, certain countries may be more supportive of MiCA than others, and there is still a fair amount of skepticism about many of these innovations at the ECB.  Nevertheless, initiatives like the European Blockchain Partnership have convened different players to discuss a vision for trusted blockchain services infrastructure for the region, developing use cases that leverage blockchain capabilities to deliver EU-wide public services.  In addition, the Bank for International Settlements (BIS), which serves as the central bank for central banks, has established the BIS Innovation Hub to advance developments in central bank digital currencies (CBDCs), although no clear implementations have yet been launched.

As for other geographies, Michael Casey pointed out two different potential models represented by China and the United States as global powers in the realm of digital money.  CBDC implementations matter in a geopolitical context because of their capacity of being used for smart contracts and programmable systems, which could bring significant changes to our existing monetary system.  CBDCs represent a direct claim on fiat currency from a central bank, with an additional programmable quality that can automatically embed transaction fees, taxes, etc.  CBDCs can enable entities in one country to have a claim on entities in another country, entering into cryptographically controlled transactions that define escrow, volatility, and other parameters.  This would eliminate the need for the US Dollar as an intermediary for international transactions.

China has been firing ahead in its centralized approach to regulating blockchain, which will be transformative particularly in the realm of CBDCs.  China cannot have an open system, and its CBDC implementation is heavily focused on its centralized capacity to control the system and utilize blockchain records for surveillance, posing major concerns at a global level.  The ruling party would not support open flows of money.  While the Chinese CBDC model is largely focused for a retail audience at the moment, CBDCs have the potential to increase interoperability between countries transacting with each other.

China and Iran announced a 25 year trade partnership for oil and other investments, which would circumvent US sanctions.  Both countries are working on digital currency solutions that are key to facilitate their mutual cross-country transactions.

The United States, on the other hand, can lean into the concerns over surveillance in the Chinese CBDC model, by strengthening its support for open flows of money.  Privacy is critical to ensure free markets.  At a global level, it is not easy to give up on the dollar, which has defined the global strength of Wall Street and has been the source of low interest rates.  The United States has built much of its economic power through the dollar, which it can use to institute sanctions because transactions must go through the US banking system.  CBDCs can build these protections into their underlying protocols.

The changing monetary system also requires changes to the dollar’s global dominance in its existing infrastructure.  While the United States initially “put its head in the sand” by not taking decisive actions with respect to digital currency, its historical support of open systems and the dominance of the dollar make up what could be the largest opportunity for CBDCs.  There are alternative ways to compete with China, and the US can rely on the principles it adopted during the Internet boom in its own approach toward CBDCs.  In the aftermath of the Cold War, the US widely supported open systems, free trade, and fair trade.  The Internet was a defining element of these exchanges.  The US spearheaded the World Trade Organization’s General Agreement on Tariffs and Trade (GATT).  In the Telecommunications Act of 1996, the US promoted an open system of innovation that got rid of gatekeepers and formed the basis for widespread Internet infrastructure, which in turn enabled US global leadership via open, permissionless innovation systems.  By adopting this same approach in the realm of digital money, the US can compete with China.

As for countries, such as Argentina, Greece, Nigeria, and Turkey, which have experienced major crises in their monetary systems, the population’s trust in its respective government has been deeply shaken.  This can fuel an even greater demand for digital currencies through more open systems.  These systems are challenging the post WWII framework that exists today.

Looking forward, these developments may point to a world with several competing currencies, which can more closely resemble the past international monetary system prior to our existing dollar-based system.   The fact that these currencies would run on blockchain and digital platforms would facilitate connectivity and global collaboration in open systems.  It would also allow for fiat currencies, which are government backed, to compete along with corporate currencies such as that proposed by Facebook’s initial Libra model, and also cryptocurrencies like bitcoin.  This transition requires proactive thought and discussion as an international community, and likely another Bretton Woods equivalent to envision the direction of these innovations. 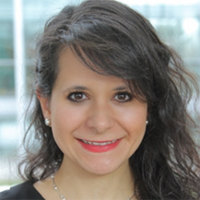 Diana Barrero Zalles ‘17 is Director of ESG & Impact at Emergents @ Weild & Co., advancing investment banking at the intersection of traditional finance and digital assets.  She is also co-author of the book Transparency in ESG and the Sustainable Economy, which discusses emerging technologies in context of the ESG trend in financial services.  With Bandman Advisors, she has advised the Parliament of Cyprus to establish a regulatory framework, in addition to conducting a national AML/CFT risk assessment, for digital assets. She founded and currently runs a blockchain discussion forum at the International Center for Finance of the Yale School of Management and is an active working group member of the industry association Global Digital Finance, having published industry guides for Central Bank Digital Currencies and market integrity for crypto trading platforms.  She also published research on stablecoins and decentralized financial market infrastructure, and writes about digital assets for Forbes, to educate the investment community.  Previously, Diana managed large cross-border transactions with the investment banking offices of the World Bank and Inter-American Development Bank in Washington DC.  She is an alumna of the University of Notre Dame and has an MBA from the Yale School of Management.  She was born in Bolivia and is a native Spanish and English speaker.