It seems like only yesterday that I came to the university I have grown to love deeply, Yale University. In the twinkling of an eye, I am reluctant but have to say goodbye to her. Two years ago, my parents were shocked and a bit displeased by my decision to give up the Ph.D. offer I had received in order to spend two years in a research associate position at Yale. Yet, when I look back at my time at Yale, I feel grateful that I took that leap of faith. The two years of research life at Yale ICF exposed me to many great finance research projects and led me towards the research area that I may devote my future academic career to exploring. More importantly, I cultivated great friendships with faculty and Ph.D. students that I will cherish forever.

As a Paolo Zannoni Research Associate at the Yale International Center for Finance, I worked with Professors William Goetzmann, Paul Goldsmith-Pinkham, Kelly Shue, Heather Tookes, and Alexander Zentefis. Under their mentorship, I applied my programming skills and economic thinking toward several research projects. Those projects expanded my interest in asset pricing, behavioral finance, corporate finance, and other research areas.

My interest in asset pricing and behavioral finance was initially sparked through several projects with Professors Kelly Shue and Paul Goldsmith-Pinkham. In a recent project on the gender gap in housing returns, we analyzed 50 million housing transactions across the U.S., and we found that single women earn significantly lower returns on housing relative to single men. We also found that single women are overoptimistic about the return they expect from their home sale. Inspired by this finding, I am interested in further exploring the mechanism behind this gender gap. Is the gender gap driven by market timing, bargaining power, or other psychological factors? Why do women overestimate their housing return? This project grew my interest in how people form and update their beliefs when making financial decisions.

I was also exposed to research projects in banking and other finance areas while at Yale. In a project for Professor William Goetzmann, I worked on studying firms that are being acquired by private equity partnerships. Then while working on a project with Professor Alexander Zentefis, I examined how bank capital shocks distort monetary transmission and small business lending patterns among banks using data on millions of small business loans. When conducting this research, I became curious about this question: how does bank network interconnectedness influence transmission and aggregate lending? Finally, in a project that I worked on with Professors Heather Tookes and Mila Sherman, we studied different outcomes among women in finance academia. Controlling for several factors, we found that women were less likely to get tenure, more likely to be placed at a lower-ranked school, and more likely to have smaller networks which concentrate among other women.

I have enjoyed my time as one of the members of the big family that comprises Yale ICF and the finance department. The faculty members have treated me as not only one of their students but also as a friend. I am so grateful that Professor Nick Barberis gave me the chance to sit in on his behavioral finance class. His course led me to the world of behavioral finance research and aroused my strong interest in this area. I am also thankful that Professors James Choi, Stefano Giglio, Jon Ingersoll, Bryan Kelly, and Kelly Shue allowed me to sit in on their Ph.D. classes and treated me as a formal student.

I will never forget the time I spent working with Professor Alexander Zentefis. Sometimes, we would talk about our favorite restaurants in New Haven. When I met obstacles while working on my own paper or experienced confusion in my finance studies, he would always offer his advice. He also gave me tremendous support in developing my Ph.D. application. I will never forget the comfort he offered during phone calls when I felt depressed over the rejections I received.

I appreciate that so many professors kept motivating me and were willing to contribute their effort to my own research and Ph.D. application. Although Professor Kelly Shue was always very busy, she encouraged me to keep generating my own ideas and was happy to talk with me whenever I had a new research idea in mind. Also, Professor Heather Tookes took much care of my Ph.D. application and recommended a great training opportunity at NYU. I appreciate that Professor William Goetzmann read my paper line by line and gave me detailed and useful suggestions for improvement. Likewise, I am grateful that Professors Paul Goldsmith-Pinkham and Song Ma gave me so much help with my application. Finally, I am also thankful for Milad Nozari, Leigh Ann Clark, and other ICF staff for their help during my stay.

A famous Chinese writer, Xun Lu, wrote a collection of essays called, Dawn Blossoms Plucked at Dusk (朝花夕拾). In some chapters of the collection, such as “Mr. Fujino” (藤野先生) and “Ah Chang and the Book of Hills and Seas” (阿长与山海经), he reminisced and expressed gratitude to the teachers and friends who had a profound influence on him in his youth.  It is heartbreaking for me to leave the small town I love deeply, but I have to move on to the next phase of my life. Before I leave, I write this article and give it the same name as the collection written by Xun Lu because I believe that, just like Xun Lu, wherever I go next, I will leave behind myself at Yale a set of faculty and students who will remain my friends and supporters for a long time. 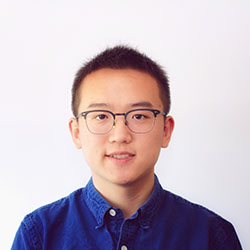 About Gen Li, Paolo Zannoni Research Associate: Gen Li is assisting Yale SOM professors with their research in corporate finance, behavioral finance and asset pricing.  Gen finished his Master of Finance degree at the University of California, San Diego (UCSD).  Supervised by Professor Joey Engelberg and Professor Allan Timmermann while at UCSD, he also participated in several finance research projects in behavioral finance and financial econometrics.  He served as a teaching assistant to Professor Harry Markowitz.  Gen has broad research interests in finance, such as behavioral finance, financial econometrics and asset pricing.  He is also exploring interests in other topics including corporate finance, and the banking sector.