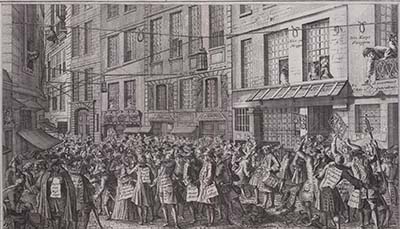 “...the South Sea Company was founded in 1711 to exchange the debts of soldiers, sailors and other government creditors with shares in the firm that had exclusive rights to trade in Spanish South America. In 1719 the South Sea Company bid aggressively for a large share of the government debt, which it financed with the public issuance of shares by subscriptions. South Sea Company share prices rose dramatically from January to June in 1720 along with the prices of other British companies and remained flat for most of the summer before falling in September. This event has since been termed the South Sea Bubble.”
—Frehen, Rik and Goetzmann, William N. and Rouwenhorst, K. Geert, New Evidence on the First Financial Bubble (July 27, 2012). Journal of Financial Economics, Volume 108, Issue 3, June 2013, Pages 585-607.

The ICF is looking back at the first global financial bubble that occurred 300 years ago in 1720 in Paris, London and the Netherlands. William Goetzmann, Geert Rouwenhorst, and Rik Frehen have collected stock prices for a large number of the traded companies in 1720. These include Dutch firms quoted in markets in the Netherlands, British firms quoted in the Netherlands,  and some previously unstudied British firms quoted in London. They incorporate additional British price information from Larry Neal. The database also contains international exchange rates and the Agio of the Bank of Amsterdam. These data are described in greater detail in  the ICF working paper, “New Evidence on the First Financial Bubble”  by Rik Frehen, Will Goetzmann and Geert Rouwenhorst. Please cite this paper when using the data.

Visit our South Sea Bubble 1720 Project website to download and explore newspaper clippings from the Leydse Courant, a Dutch newspaper published in the 1720's, which documents some of the economic news at the time and the historical moments of the financial bubble from November 20, 1719 through December 31, 1721. The documents are high-resolution jpg images provided by Rik Frehen.

For the financial history enthusiasts: the Yale ICF will tweet various newspaper clippings and information about the South Sea Bubble of 1720 throughout the year. Check out our hashtag: #ICF_FinancialHistoryFriday for more!