Johnnetta B. Cole, president emerita of the Smithsonian National Museum of African Art and president emerita of Spelman College and Bennett College, will accept the Legend in Leadership Award for Higher Education from the Yale Chief Executive Leadership Institute at a ceremony to be held at the institute’s 93rd CEO forum on January 30 at the Yale School of Management, Edward P. Evans Hall. 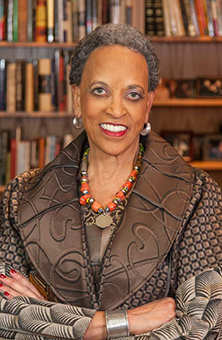 Summit organizer Professor Jeffrey Sonnenfeld, senior associate dean for leadership studies at the Yale School of Management, commented,“It is no wonder why Johnnetta Cole was the unanimous, enthusiastic nominee for this award by her peer educators. She is not only one of the most eloquent, inspiring speakers on the planet, but she has moved from words to actions—always profoundly transforming each historic institution she has brilliantly led. She has continually come back from retirement, responding to the call to serve with vision, energy, inspiration, and distinction.”

Cole is an accomplished cultural anthropologist, educator, author of several books, museum director, and global humanitarian. She received her undergraduate degree from Oberlin College and earned her PhD from Northwestern University. She served as the first African-American woman president of Spelman College, a historically black college in Atlanta, from 1987 to 1997. Under her leadership, Spelman was named by U.S. News & World Report as the number-one regional liberal arts college in the South. Cole then served as president of the 150-year-old Bennett College in Greensboro, North Carolina, from 2002 to 2007, where she helped catalyze an intellectual renaissance while leading a $50 million development campaign. From 2009 until this past year, she was director of the Smithsonian National Museum of African Art in Washington, D.C. She has also served as president of the Association of Art Museum Directors.

The theme of this year’s Higher Education Summit is “Higher Education’s Worldly Wisdom: Global Reach and What We Teach.” Distinguished higher education presidents and board chairs from across the U.S. will engage in lively, candid discussions at this invitation-only leaders’ conference hosted by the Yale School of Management.

Conference partners are TIAA and The Chronicle of Higher Education.

The Yale Chief Executive Leadership Institute was founded in 1989 to provide original research on top leadership and lively, current educational forums through peer-driven learning for accomplished leaders across a range of sectors. Visit the Yale CELI website for more information.