Denise M. Morrison, president and CEO of Campbell Soup Company, accepted the Legend in Leadership Award of the Yale School of Management’s Chief Executive Leadership Institute on March 15 at a ceremony at the Yale CEO Caucus in Washington, D.C.

The award was presented to Morrison by Lloyd Blankfein, chairman and CEO of the Goldman Sachs Group. 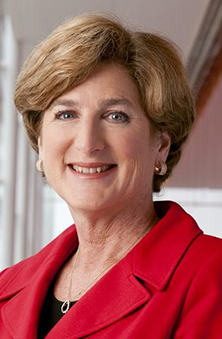 “Over the past five years, Denise has provided an especially inspiring model of courageous entrepreneurial leadership, enterprise transformation, and corporate citizenship. She has skillfully balanced superb external acquisitions and internal investments to lead a transformation in product quality, nutrition, and improved financial returns, with investors valuing the enterprise at 20 times earnings. She has revitalized iconic brands such as Pepperidge Farm, V8, Prego, and Campbell’s iconic soups while bringing in terrific new enterprises such as Bolthouse Farms, Plum Organics, and Garden Fresh Gourmet. A member of the Presidents’ Export Council, Denise has earned enthusiastic recognition and accolades from her industry peers.”

Under Morrison’s leadership, Campbell’s has made a strategic realignment as a purpose-driven organization, with the words “Real food that matters for life’s moments” as a key motivator. In keeping with this realignment, Morrison has shifted the company away from the “Big Food” label and embraced the company’s unique market positioning, focusing on more natural ingredients, and more transparency about current ingredients. By the end of fiscal year 2018, Campbell will remove artificial colors and flavors from most of its North American products and will continue its trend away from high-fructose corn syrup. The company has also supported mandatory national GMO labeling.

The caucus theme was “Effective Problem Solving amid Election Politics: Substantive Solutions vs. Simplistic Slapdowns.” Distinguished global corporate leaders from across industries engaged in lively, candid discussions at this invitation-only leaders' conference hosted by the Yale School of Management.

The Chief Executive Leadership Institute was founded in 1989 to provide original research on top leadership and lively, current educational forums through peer-driven learning for accomplished leaders across a range of sectors. For more information, visit celi.som.yale.edu.