Kenneth C. Frazier, chairman and CEO of Merck & Co, Inc., will accept the Legend in Leadership Award of the Yale School of Management’s Chief Executive Leadership Institute in a ceremony during the 25th anniversary gathering of the institute’s CEO Summit on December 17 at the Waldorf Astoria New York.

The award will be presented to Mr. Frazier by Frank Blake, retired chairman and CEO of The Home Depot, and Thomas H. Glocer, founder and managing partner of Angelic Ventures, LP, Merck board member, and former CEO of Thomson Reuters. 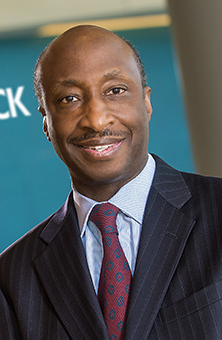 Summit organizer Jeffrey Sonnenfeld, senior associate dean of leadership studies at the Yale School of Management, commented: “Ken Frazier is revered by fellow pharmaceutical titans and is an inspiration to leaders across industries and sectors. CEO since 2011, Ken has made courageous, successful long-term investments in R&D just as so many of his peers slashed such advancements of science to chase short-term returns. As the chairman of the industry group PhRMA, he has worked to advance the support for innovation in pharmaceuticals while calling out the misconduct of outlier firms.”

Frazier completed high school at age 16, graduated with highest honors from Pennsylvania State University in 1975, and went on to graduate from Harvard Law School in 1978. As CEO of Merck, he has remained committed to a customer-centric culture and has worked to expand Merck’s work into the developing world. More recently, he has catapulted Merck into the top league of hepatitis C drug makers, and the company’s breakthrough cancer immunotherapy medicine, Keydruda, is considered a potential blockbuster.

The summit theme is “In Whom Do We Trust: Optimist Visionaries or Cynical Pragmatists.” Distinguished global corporate leaders from across industries will engage in lively, candid discussions at this invitation-only leaders’ conference hosted by the Yale School of Management.

The Chief Executive Leadership Institute was founded in 1989 to provide original research on top leadership and lively, current educational forums through peer-driven learning for accomplished leaders across a range of sectors. Visit the CELI website for more information.

For an interview with Jeffrey Sonnenfeld or to register for the award presentation and final conference session please contact Nathan Williams, 203-432-7817; nathan.williams@yale.edu, or Joe DeLillo, 202-742-4452; joseph.delillo@yale.edu.