New Haven, Conn., December 16, 2014 — Klaus Kleinfeld, chairman and CEO of Alcoa, will accept the Legend in Leadership Award of the Yale Chief Executive Leadership Institute at a ceremony to be held at the 80th gathering of the Yale CEO Summit on December 18 at the Waldorf Astoria New York. 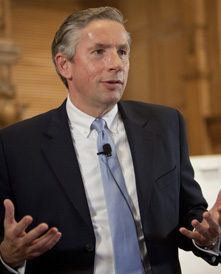 The award will be presented to Mr. Kleinfeld by Wilbur Ross, chairman and CEO of WL Ross & Co., and Ellen Kullman, chair and CEO of DuPont. While most CEO Summit discussions are off the record, members of the press are invited to attend the award presentation to Mr. Kleinfeld at 2:30 p.m. and the final conference session to follow.

Summit organizer Jeffrey Sonnenfeld, senior associate dean for executive programs at the Yale School of Management, commented: “Klaus’ inspired leadership of Alcoa has shown that the 126-year-old company deserves at least the same enthusiasm that the media and Wall Street show for the new new thing! Just in the past 30 days, he has executed two visionary materials acquisitions in the UK and Germany, ensuring Alcoa’s preeminence on the frontier of aerospace equipment. Launched at the height of the financial crisis, he is leading the transformation of Alcoa from a commodity-centric focus to an increased focus on multi-material, innovative, value-added businesses. His investments in enhanced manufacturing and highly sophisticated engineering have joined and helped catalyze the automotive and aerospace industries. The company’s transformation gained significant traction in 2013, and last year, Alcoa's total shareholder return was roughly 60%. Klaus is universally admired by his peer CEOs for his inspiring global economic perspectives along with his distinctive blend of industrial accomplishment, entrepreneurial decisiveness, and high integrity character.”

Kleinfeld was born in Bremen, Germany, and obtained a doctorate in Strategic Management. He rose to serve as chief executive over his 20-year career with Siemens, the global electronics and industrial conglomerate. While at Siemens, he was celebrated for his sweeping transformation of the company, increasing revenues and nearly doubling market capitalization. Previously, he served as president and CEO of Siemens’ U.S. subsidiary. Kleinfeld joined Alcoa in 2007 as president and chief operating officer and seven months later was made chief executive. Kleinfeld is on the boards of HP and Morgan Stanley as well as the U.S.-China Business Council, the Chinese Premier’s Global CEO Advisory Council, and the Brookings Institute. He also serves as chairman of the U.S.-Russian Business Council.

The Summit theme is “The Global CEO and Local Sensitivities: Leading at Once as Diplomat, Patriot, Entrepreneur, Financier, and Industrialist.” Distinguished global corporate leaders from across industries will engage in lively, candid discussions at this invitation-only leaders’ conference hosted by the Yale School of Management.

The Yale Chief Executive Leadership Institute was founded in 1989 to provide original research on top leadership and lively, current educational forums through peer-driven learning for accomplished leaders across a range of sectors. Visit the Yale CELI website for more information.

For an interview with Jeffrey Sonnenfeld or to register for the award presentation and final conference session please contact Tabitha Wilde, 203-432-6010; tabitha.wilde@yale.edu, or Joe DeLillo, 202-742-4452; joseph.delillo@yale.edu.