In the midst of the COVID-19 lockdown, earnings beat expectations for most large US banks in the second quarter, as a surge in non-interest income offset rising loan-loss provisions, and banks benefitted from Federal Reserve liquidity programs and regulatory forbearance.

Large US banks started reporting their second-quarter earnings last week. Their European peers are expected to follow at the end of this month.

In this blogpost, we analyze 14 large US banks that have published their earnings as of July 20. They are among the 33 firms that participated in this year’s Dodd-Frank Act Stress Test (DFAST 2020, see related post here). They include eight global systemically important banks (G-SIBs, as of 2019) and six non G-SIBs.

Given the deep recession and prolonged COVID-19 crisis, earning reports can serve as a thermometer of the economy and the financial system.

For the second quarter, investors focused on revenues, credit quality, and loan-loss provisioning. While financial markets have calmed, the real economy has slowed markedly. Unemployment has surged and consumer activity has plummeted due to lockdowns, although the numbers of positive cases and business closings are uneven across the United States. Small and medium-sized enterprises (SMEs) are facing particular difficulties in financing themselves. Various government measures, including the establishment of lending facilities and introduction of relief programs, have been implemented to support households and businesses.

The common equity Tier 1 (CET1) capital ratio, an important regulatory indicator of bank solvency, increased quarter-on-quarter (QoQ) for 13 of the 14 financial institutions; the outlier was Regions Financial Corp (Figure 1-1). CET1 capital (the numerator) increased for 12 firms while risk-weighted assets (RWA, the denominator) decreased for 12 firms (Figure 1-2 and 1-3). The increase in CET1 capital for many financial institutions reflected the increase in net earnings in the second quarter.

Some financial institutions attributed the decrease in RWA to reduced exposures; for example, Bank of America said that clients in the second quarter paid down $62 billion of the $67 billion of loan growth the bank saw in the first quarter (see slide 7 here). 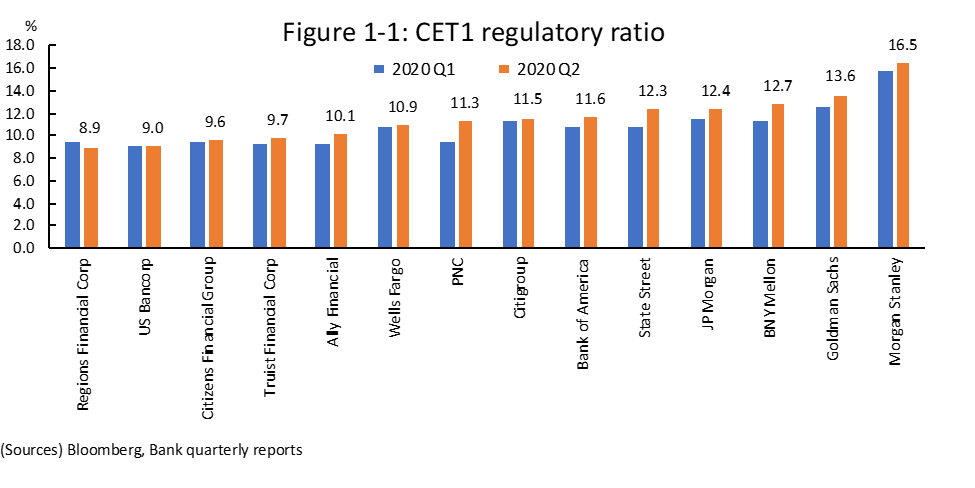 The earnings rose for three of the 14 firms, stayed roughly the same for one firm, and fell for the other 10, compared to the first quarter. However, the results were better than market expectations (Figure 6-1). That result was mostly due to solid non-interest income, which increased for 10 of the 14 firms (Figure 2-1). 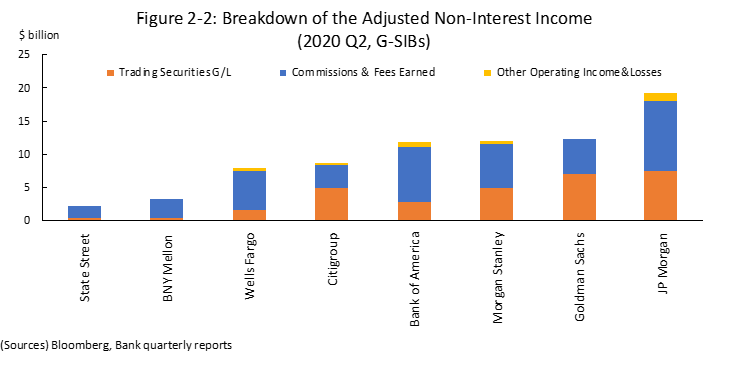 Some financial institutions noted that their equity and fixed-income underwriting business in investment banking sector also contributed to the rise in non-interest income; given the attractive low interest rate, clients’ demand on bond issuance has been growing.

Bank executives said that that the strong non-interest income is likely to be transient and that the impact of the trading bonanza is likely to diminish in the second half of 2020. The Economist notes that more banks may post a net loss in the third quarter if the profits in investment-banking taper while loan-loss provisions keep rising.

While banks’ earnings were stronger than expected, non-performing loans (NPLs) increased 24.1% for the 10 banks compared to the second quarter (Figure 3). The ratio of NPLs to total loans increased for 9 of the 10 financial institutions. Many banks noted that in addition to small and medium-sized corporate borrowers, commercial real estate and energy-sector borrowers face severe challenges. 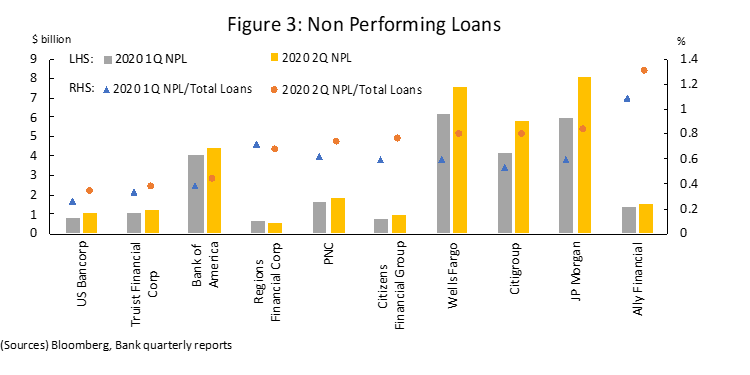 However, reported nonperforming loans would have been worse if banks had not provided relief to many borrowers, under the cover of accounting and other forbearance provided by the Federal Reserve Board and Congress in response to the COVID-19 pandemic. Many loans went under deferral programs or had their terms modified. (See here for more details on Loan Modifications, Non-Performing Loans, and Accounting relief).

Banks varied widely in the details they reported on the impact of payment deferrals and other COVID-19 relief. For instance, Ally Financial exhibited its weekly auto deferral program, while Regions Financial Corp listed the number of customers’ loan modifications. US Bancorp noted that 130,000 accounts and over $17 billion in loans have been modified through forbearance programs. JPMorgan said it has provided assistance to nearly 1.7 million accounts, representing $79 billion in loans, since March 13; the company said its payment deferral activity had trailed off by the end of the quarter (see here, slide 3).

For the 14 financial institutions combined, the loan loss provision increased from $30.3 billion in the first quarter to $41.6 billion in the second quarter (Figure 4-1a).

“Current expected credit losses” (CECL), a new accounting methodology for provisioning adopted by large US banks, requires banks to take into account reasonable and supportable forecasts in addition to past and current information. The loan loss provision increased significantly after the introduction of the CECL. The majority of provisioning were in consumer banking (Figure 4-1b).

Large US financial institutions adopted CECL in the first quarter, so this reporting was the second time banks report their loan loss provisioning under the new accounting methodology. Under the CECL methodology, which requires a more forward-looking, quantitative, model-based approach, banks’ provisioning is likely to diverge across banks. In second-quarter earnings presentations, there was a lot of variety in how banks reported on their CECL modeling.

Because of regulatory forbearance, the surge in loan-loss provisioning did not all show up in banks’ regulatory capital calculations. In March 2020, the Fed and other U.S. banking agencies provided banks an option to temporarily delay the impacts of CECL on regulatory capital (see here for more details). Under these rules, firms that adopt CECL can calculate the estimated impact of CECL on regulatory capital as the day-one impact of adoption plus 25% of the subsequent change in allowance during a two-year deferral period. Most banks that have already adopted CECL reported their CET1 capital based on this rule.

Figure 4-2 indicates the impact of the CECL capital-deferral benefit on CET1 ratios for the first and second quarters. The differences between reported and actual capital ratios are relatively subtle, at most 0.88%. However, the gap between the CET1 ratio without deferral and CET1 ratio with deferral seems to be widening. Moreover, it should be noted that the US banks will enjoy the transition period a year longer than their international peers, due to the discrepancy of deferral end-dates between the agreements published by the Basel Committee on Banking Supervision (BCBS) and the CARES Act. 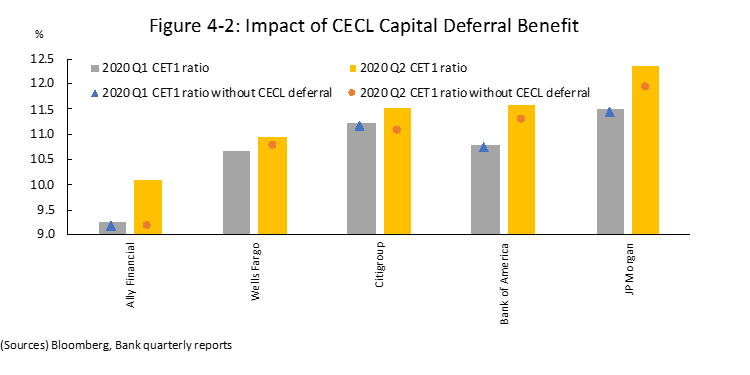 5. Other Regulatory Relief and Forbearance

Since the outbreak of the crisis, the US regulatory agencies, along with their international peers, have implemented various regulatory relief and macroprudential policies.

One of the reported numbers that has been impacted by this relief is the Supplementary Leverage Ratio (SLR), the US implementation of the Basel III Tier 1 leverage ratio. Systemic US banks are required to maintain an SLR of at least 5%.

On April 1, the Federal Reserve allowed the largest bank holding companies to temporarily exclude reserves and Treasury securities from their calculation of total assets for determining the supplementary leverage ratio. A media comment notes that the Fed relief had a “huge effect” on banks’ balance sheets.  The most recent banks’ reports illustrate that impact.

In particular, nine banks have reported their participation in PPP, many underscoring their lending to the SMEs in their presentations for investors.

Figure 5-2 indicates the outstanding PPP loans for each bank. The amount is expected to increase for the next quarter, supported by strong demand. Banks are also expected to report the impact of the MSLP in third-quarter earning reports. 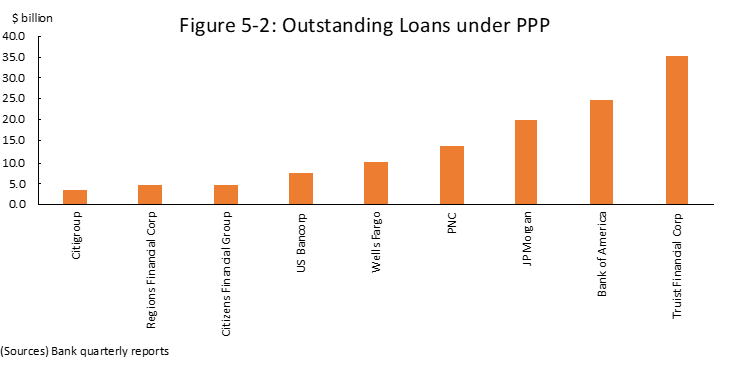 The earning reports, overall, were better than market participants had expected. Figure 6-1 exhibits the differences between Bloomberg’s consensus estimates and the actual adjusted earnings per share (EPS); for the 12 financial institutions that did not have negative adjusted EPS, the actual results outperformed the market estimates, sometimes with wide margins. 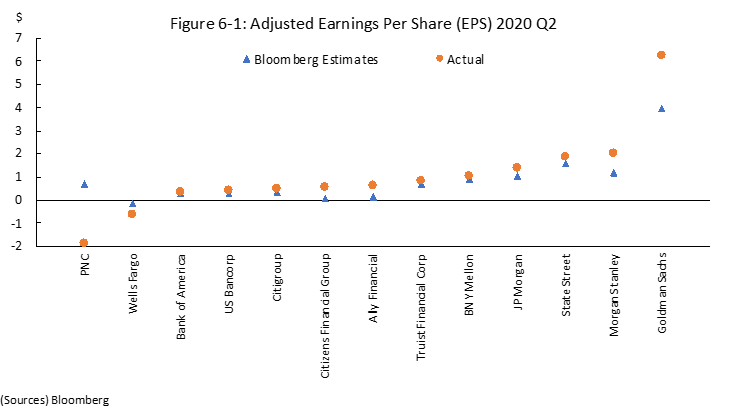 However, market prices suggest that the financial sector still faces many significant challenges. Figure 6-2 show financial firms’ slow recovery in equity prices, while the S&P 500 benchmark index has returned to levels reached prior to the outbreak of the COVID-19 crisis. As the crisis and the recession are expected to prolong, the investors expect the next quarter to be as challenging, particularly for non G-SIBs that cannot benefit from the trading profit bonanza or lending in foreign countries, where COVID-19 cases have dwindled. 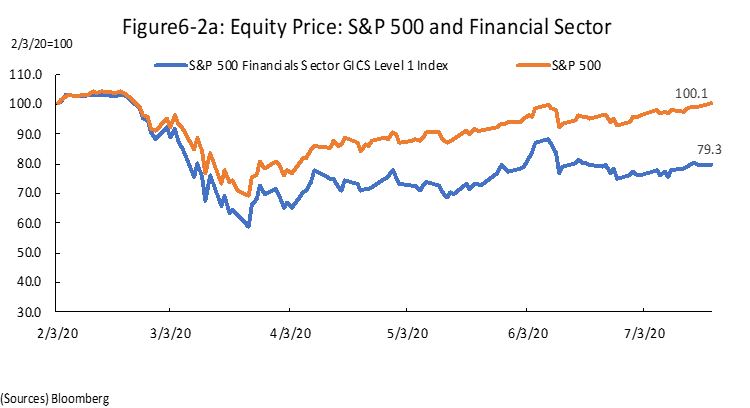 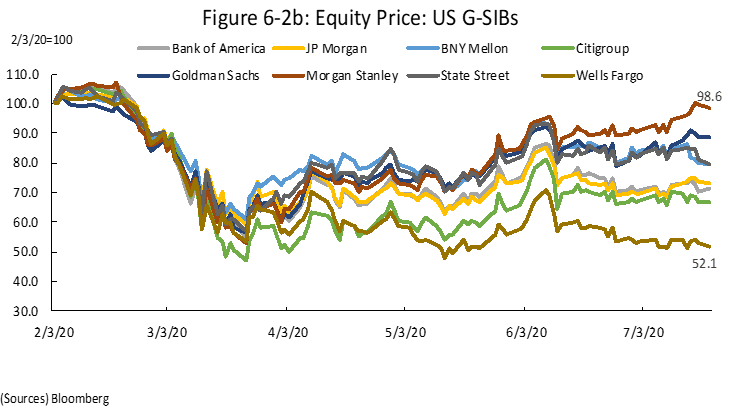 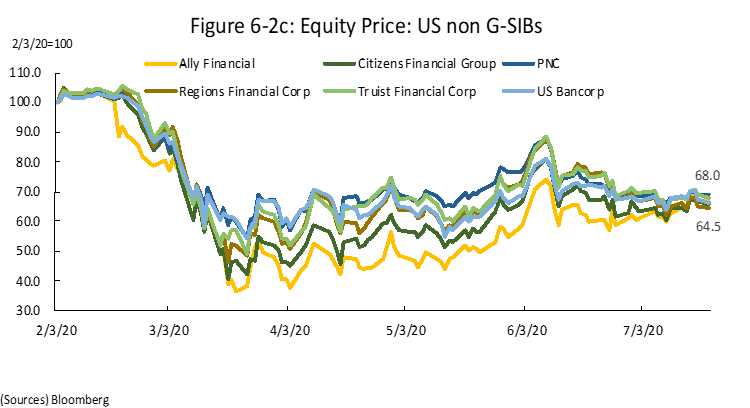