Countries around the world are reeling from the health threat and economic and financial fallout from COVID-19. Legislatures are responding with massive relief programs. Central banks have lowered interest rates and opened lender-of-last-resort spigots to support the flow of credit and maintain financial market functioning.

Authorities are also deploying macroprudential policies, many of them developed or improved since the global financial crisis of a decade ago. In this blog, we describe the main macroprudential measures that countries have taken recently. We summarize specific actions and factors considered when relaxing bank capital, loan forbearance, and liquidity requirements. Since late January, about 50 countries have made more than 230 announcements, with up to 500 separate actions, based on current entries in the new Yale Program on Financial Stability 2020 Financial-Intervention Tracker. Macroprudential announcements represent 40 percent of the announcements in the tracker, which also includes those for fiscal, monetary, and emergency liquidity (see figures). 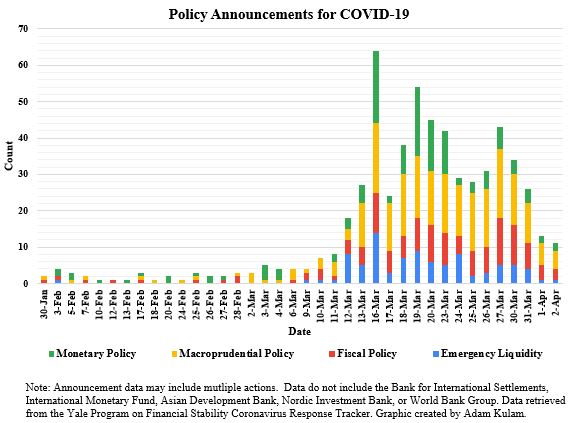 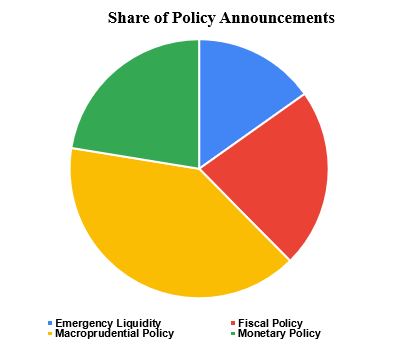 The temporary relaxation of financial requirements with clear guidance should mitigate the immediate economic harm from the pandemic. Banks can absorb more losses and support lending, can help borrowers harmed by COVID-19 by modifying loans, and can work to distribute quickly any funds from fiscal, monetary and emergency liquidity programs to support households, businesses, and market liquidity. Acting swiftly now can lead to better outcomes in the long run.

Easing bank capital requirements is the most common macroprudential policy that national authorities are using. The Basel III international capital framework included a countercyclical capital buffer (CCyB) that banks can build in good times and draw down to absorb higher losses in bad times to ensure that credit is extended during a crisis. Most countries that had activated their CCyB have released some or all of it during the current crisis. As of March 24, 13 of the 15 countries identified in a recent Brookings paper as having a positive CCyB before year-end 2019 had cut it. Canada also lowered its domestic stability buffer, which is similar to the CCyB.

Some countries have reduced requirements or given guidance that banks can operate below other capital buffers. The European Central Bank (ECB) told banks it supervises directly that they can operate temporarily below their tailored (Pillar II) supervisory buffers. The ECB also supported banks partially meeting core capital requirements with non-core capital instruments. The U.S. has encouraged banks to draw on capital buffers during the current crisis; although U.S. regulators had not raised the CCyB, some of the largest banks were operating with capital above levels required by regulations and previous stress tests. The Federal Reserve also recently allowed the largest bank holding companies to temporarily exclude reserves and Treasury securities from their calculation of total assets for determining the supplementary leverage ratio.

In reducing the CCyB or similar buffers, the UK and others, such as Sweden and Norway, have explicitly advised banks to use the additional space created by releasing the buffer to meet increases in expected losses and support credit, rather than to increase dividends or employee bonuses. In addition, some countries are asking banks to consider cutting dividends to conserve capital to absorb future losses. The ECB asked banks to suspend dividends until at least October. UK regulators asked banks to scrap dividends and review bonuses this year. While Basel III requires automatic reductions in payouts if a bank falls into its capital conservation buffer, regulators are asking banks with capital above the buffers to consider cutting payouts now, given the steep falloff in activity and highly uncertain economic outlook.

U.S. regulators have not imposed a freeze on shareholder distributions. Former Fed Governor Jeremy Stein, at a recent Brookings forum, argued that is a significant policy mistake. While the eight U.S. globally systemically important banks have voluntarily suspended share repurchases through the second quarter, the Fed is currently assessing capital positions in its annual stress tests. The Fed explicitly asked banks, in the proposed rule that eases the leverage ratio, that they not increase shareholder distributions.

2. Easing the approach to nonperforming loans

Many countries are encouraging banks and other financial firms to work with borrowers temporarily affected by the crisis. Some authorities have provided guidance on loan forbearance. It is standard practice for banks to increase loan-loss revenues for borrowers who miss payments. But actions that require banks to increase loan-loss provisions for a system-wide and transitory shock would put a large strain on their capital and not be consistent with macroprudential objectives.

Some authorities have provided clear guidance that banks should not automatically downgrade borrowers if they cannot make payments for reasons related to COVID-19. U.S. banking regulators will not require banks that defer payments or extend maturities to automatically categorize these loan modifications as troubled debt restructurings.

Authorities also have asked banks to take government assistance into account when evaluating a borrower’s ability to repay a loan. For example, the Bank of England said it would not be reasonable or supportable to reevaluate a borrower’s idiosyncratic risk at this time; if banks do reevaluate a borrower’s risk, they should take into account government relief measures, including repayment holidays, in calculating expected losses. The ECB said that it would “exercise flexibility” regarding the classification of borrowers as unlikely to pay when banks call on new COVID-related public guarantees, and when borrowers are covered by legally-imposed payment moratoria.

Authorities in many countries also are easing banks’ required liquidity buffers. Some have argued that the new liquidity rules for large banks put in place after the GFC are “microprudential” policies, because the focus is to keep individual banks liquid. However, if all banks were to try to maintain their buffers in a systemic event, it could starve the broader financial system of liquidity. Thus, in the current situation, the motivation for encouraging banks to use their liquidity buffers is macroprudential.

Most authorities have told banks they may operate below Basel III liquidity coverage ratios (LCRs), the ratio of high-quality liquid assets to short-term obligations. The European Banking Authority issued guidance to national authorities that the LCR “is also designed to be used by banks under stress. Supervisors should avoid any measures that may lead to the fragmentation of funding markets.” The ECB will allow banks it supervises to “operate temporarily below” the LCR. The Swedish regulator expanded this to different currencies by allowing banks to temporarily “fall below the liquidity coverage ratio (LCR) for individual currencies and total currencies.” The Fed said it would support firms that choose to use their liquidity buffers to “lend and undertake other supportive actions in a safe and sound manner.”

South Africa’s central bank specifically lowered its LCR to 80% from 100%. But most authorities have not specified precisely how much banks can draw down their buffers. The lack of guidance could potentially limit their usefulness as a macroprudential safeguard, as argued in a recent Brookings blog. Indeed, the use of liquidity buffers during the current crisis should be relatively aggressive, considering the encouragement by many central banks for banks to access the discount window and other central bank funding.

Authorities can use other tools to help banks help borrowers. For example, the CARES Act in the U.S. allows homeowners with a government-backed mortgage to request forbearance for up to a year. Other examples: The Philippine central bank raised single-borrower limits and the Swedish financial regulator relaxed temporarily a macroprudential rule that required high-loan-to-value borrowers to amortize their mortgage loans.

Banking authorities also are easing the costs of compliance so that financial institutions can focus their limited resources on lending and working with troubled borrowers; such measures can be considered macroprudential. The Bank of England’s and ECB’s decisions to delay 2020 stress tests are in this category. The Basel Committee delayed implementation of Basel III to “provide additional operational capacity for banks and supervisors to respond to the immediate financial stability priorities resulting from the impact of the coronavirus disease (COVID-19) on the global banking system.” Canada’s regulator suspended consultations on regulatory matters until conditions stabilize. The Fed temporarily reduced exam activities and delayed some reporting deadlines. U.S. regulators will allow banks to delay implementation of the new accounting rule for current expected credit losses and to complete the transition over five years instead of three.

Macroprudential policies are an important complement to the unprecedented fiscal, monetary, and emergency liquidity actions taken to offset the painful economic effects of COVID-19. One lesson is that countries with stronger financial systems can respond in many more ways. That scope for action may greatly improve the ability of national authorities to limit damage to their economies. This is dramatically different from the global financial crisis, when a weak financial system was the primary cause and itself needed government support. A second lesson is the critical role of macroprudential policies in promoting financial and macroeconomic stability, by building buffers when the economy is strengthening so that they can be used to offset contractions in credit when the economy weakens.