Below we report on operational Fed programs, based on the Fed’s weekly H.4.1 release. The use of lending facilities has declined to $87.1 billion. The use of swaps is now at 2% of the peak amount while a few central banks have slightly increased their use in the past few weeks.

As of December 2, the Fed’s liquidity programs had $87.1 billion in outstanding loans. The total outstanding has fallen from $94.7 billion in October, the last time we reported the usage (see the post here).

Figure 1 below shows the outstanding amount of each facility, not including Treasury contributions that are invested in Treasury securities rather than loans to market participants.

On November 6 and 20, the Federal Reserve Bank of New York (NY Fed) announced additional counterparties for the CPFF, SMCCF, TALF, and the agency commercial mortgage-backed securities (agency CMBS) purchases. This follows the statement in July, which announced an initiative to expand the set of counterparties for these programs. The NY Fed explained that the newly added firms represent a diverse range of market participants, including Minority-, Women-, and Veteran-owned Business Enterprises (MWVBEs). The following dealers and sellers will be eligible in addition to those already announced on October 19 and 23.

The additional commercial paper dealer for the CPFF announced on November 6 is:

The additional eligible sellers for the SMCCF announced on November 6 are:

The additional agency CMBS approved counterparties announced on November 20 are:

The additional agent for TALF announced on November 20 is:

On November 19, the Treasury published a letter from Secretary Steven T. Mnuchin to Jerome Powell, Chairman of the Federal Reserve Board of Governors. The letter indicated the Treasury would not extend the programs established under the CARES Act after December 31.

The Fed’s lending facilities established under Section 13(3) can be categorized into three buckets: the PDCF and PPPLF do not have Treasury capitalization; second, the CPFF and MMLF have equity protection from the Treasury’s pre-existing ESF funds; and, third, the facilities for corporate bonds and loans, municipal bonds, and asset-backed securities (the SMCCF, PMCCF, MSLP, MLF, and TALF) have equity funding that the Treasury provided under the CARES Act. The letter’s request applies to the latter bucket.

The Fed responded on November 19 with a statement that, “the Federal Reserve would prefer that the full suite of emergency facilities established during the coronavirus pandemic continue to serve their important role as a backstop for our still-strained and vulnerable economy.” On November 20, Chair Powell confirmed the Fed would arrange to return the unused portions of the funds allocated to the CARES Act facilities with a December 31 termination.

For a discussion of these developments and the future of the Fed emergency lending facilities supported by CARES Act funds, see this YPFS blog post.

On November 30, the Fed announced that it would extend the following facilities originally scheduled to expire on (or around) December 31 this year, through March 31, 2021: the CPFF, MMLF, PDCF, and PPPLF. These four facilities do not have equity funding that the Treasury provided under the CARES Act.

Over the past month, central banks reduced their use of the Fed’s U.S. dollar swap lines. As of December 3, the total amount outstanding is $9,128 million. Compared to the peak on May 27, this is a 98% drop, reflecting the low demand of the swap lines in the current environment.

While the overall demand has been low, a few central banks have resumed the use of the swap line over the past weeks. For instance, on November 19, the Bank of England (BOE) reported the use of $115 million. This was the first time since July 22 that the BOE reported use larger than $100 million. The Swiss National Bank has been increasing its use of the swap line. As of December 3, the Swiss National Bank reported $5,866 million outstanding, now representing 64 percent of the total outstanding amount (Figure 2). 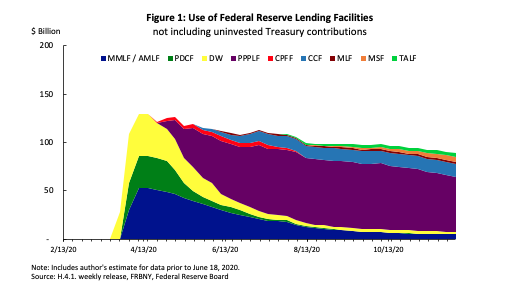 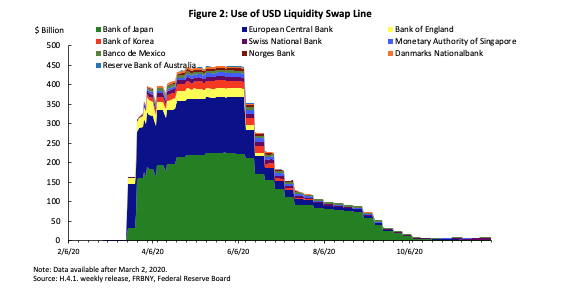 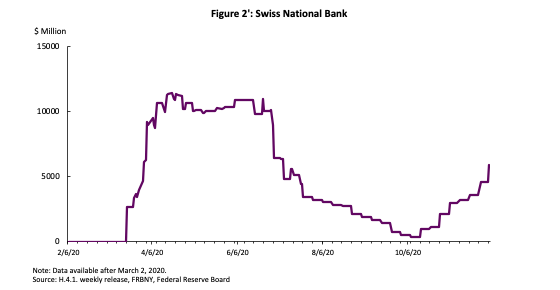 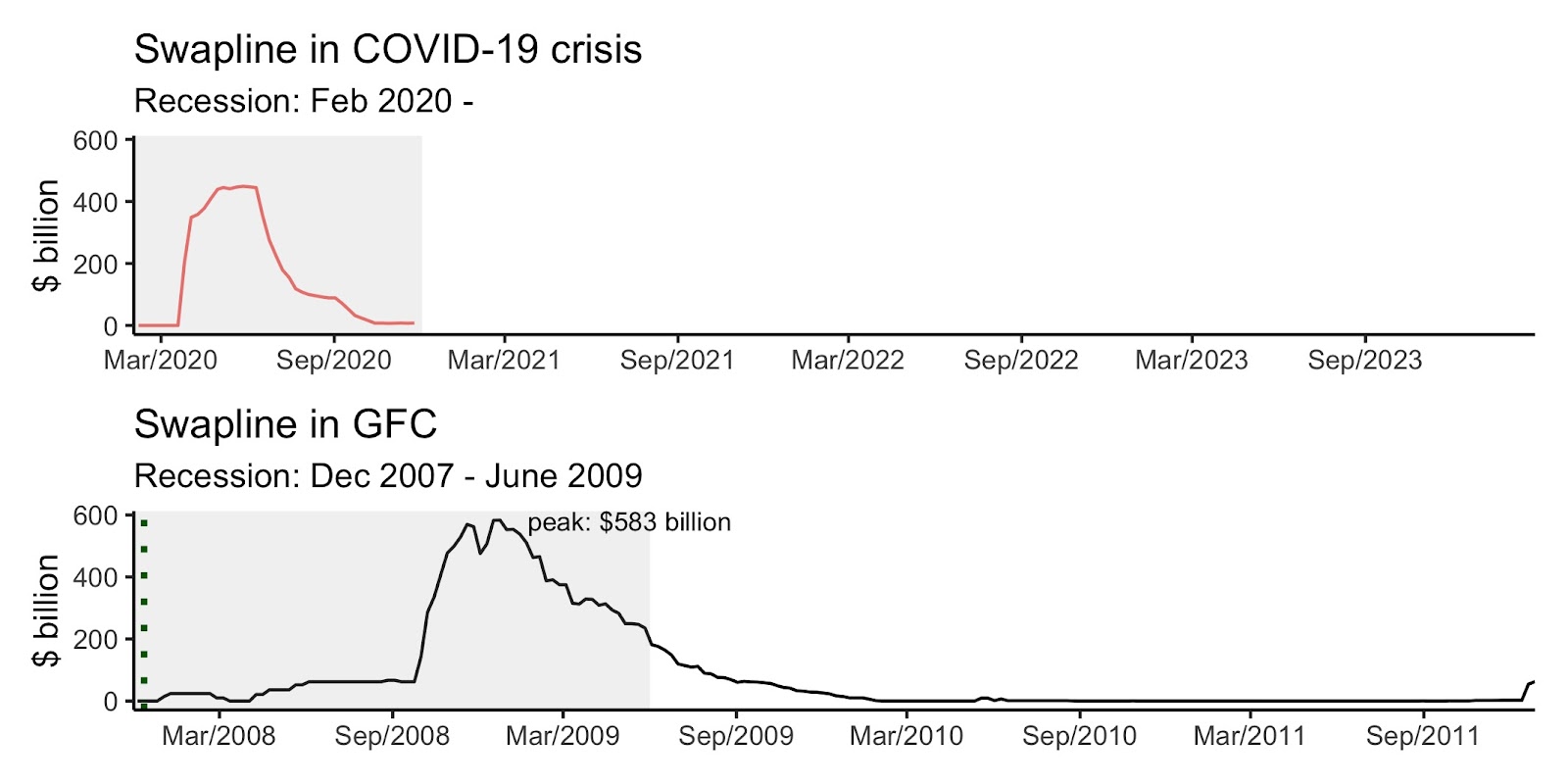 The MMLF allows the Fed to fund the purchase of money market mutual fund (MMF) assets. The program is established under Section 13(3) of the Federal Reserve Act. The Fed reported that the U.S. Treasury, to date, has provided an equity cushion of $1.5 billion to the Money Market Mutual Fund Liquidity Facility—as part of $10 billion total in credit protection. The facility had $4,915 million in outstanding loans on December 2. It is similar to the Asset-Backed Commercial Paper Liquidity Money Market Mutual Fund Liquidity Facility (AMLF) that the Fed launched during the GFC. The AMLF funded the purchase of ABCP from MMFs. In comparison, the MMLF is authorized to lend against a broader range of collateral. 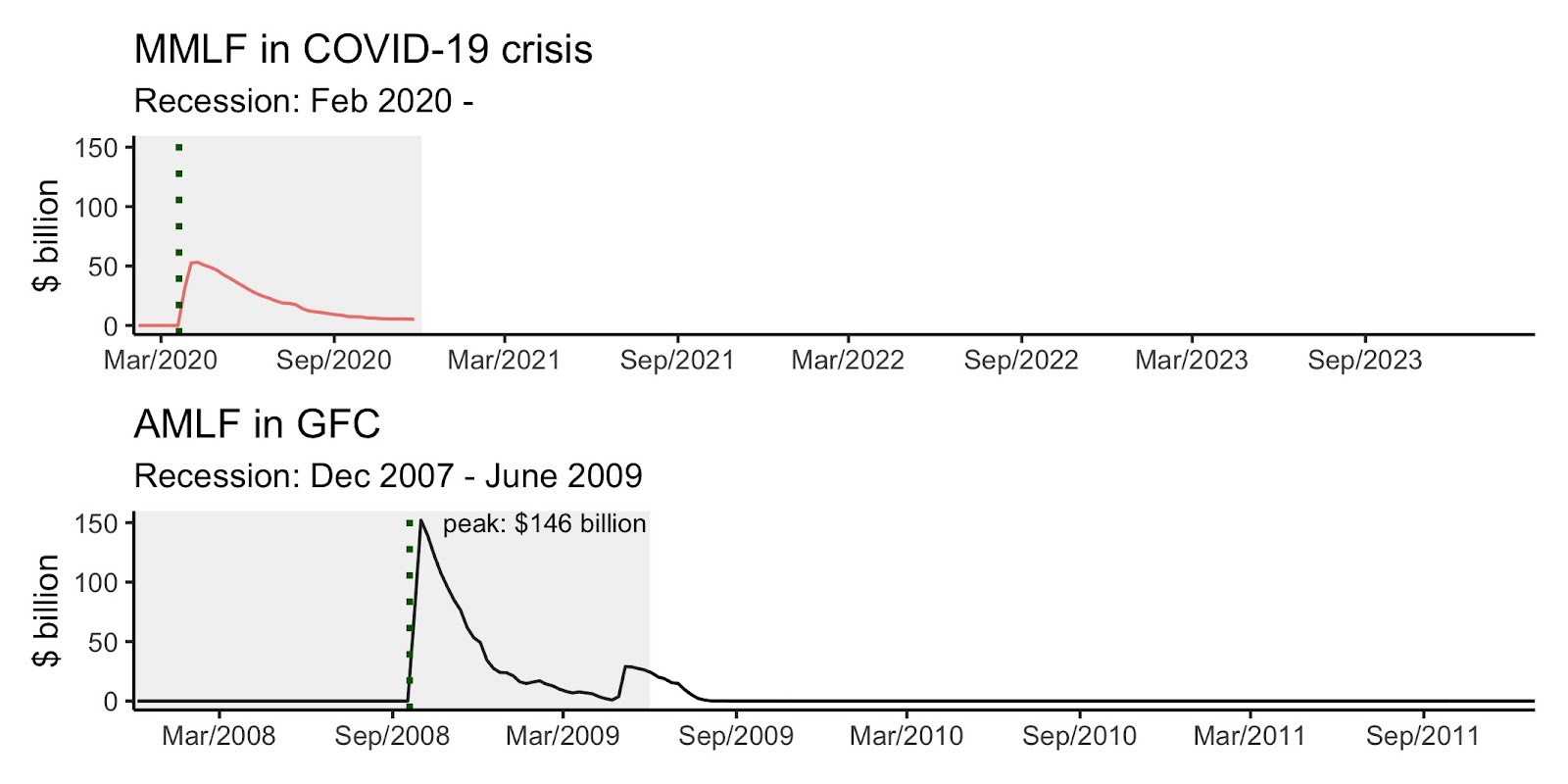 The DW is a standing facility that allows the Fed to provide collateralized loans to depository institutions. It had $1,992 million in outstanding loans on December 2. 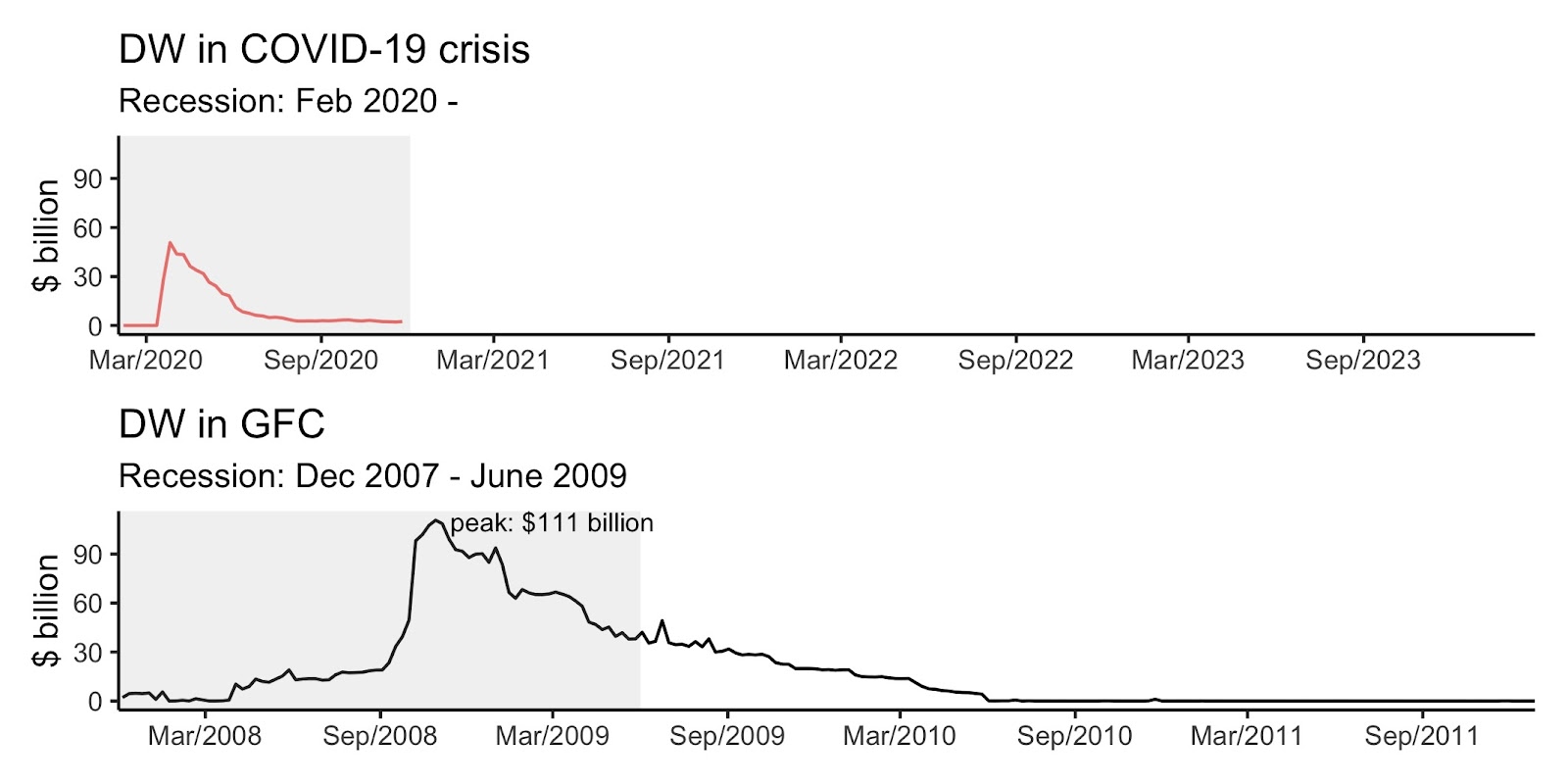 The PDCF allows the Fed to extend collateralized loans to primary dealers. The facility was established under Section 13(3). The facility had $250 million in outstanding loans on December 2. 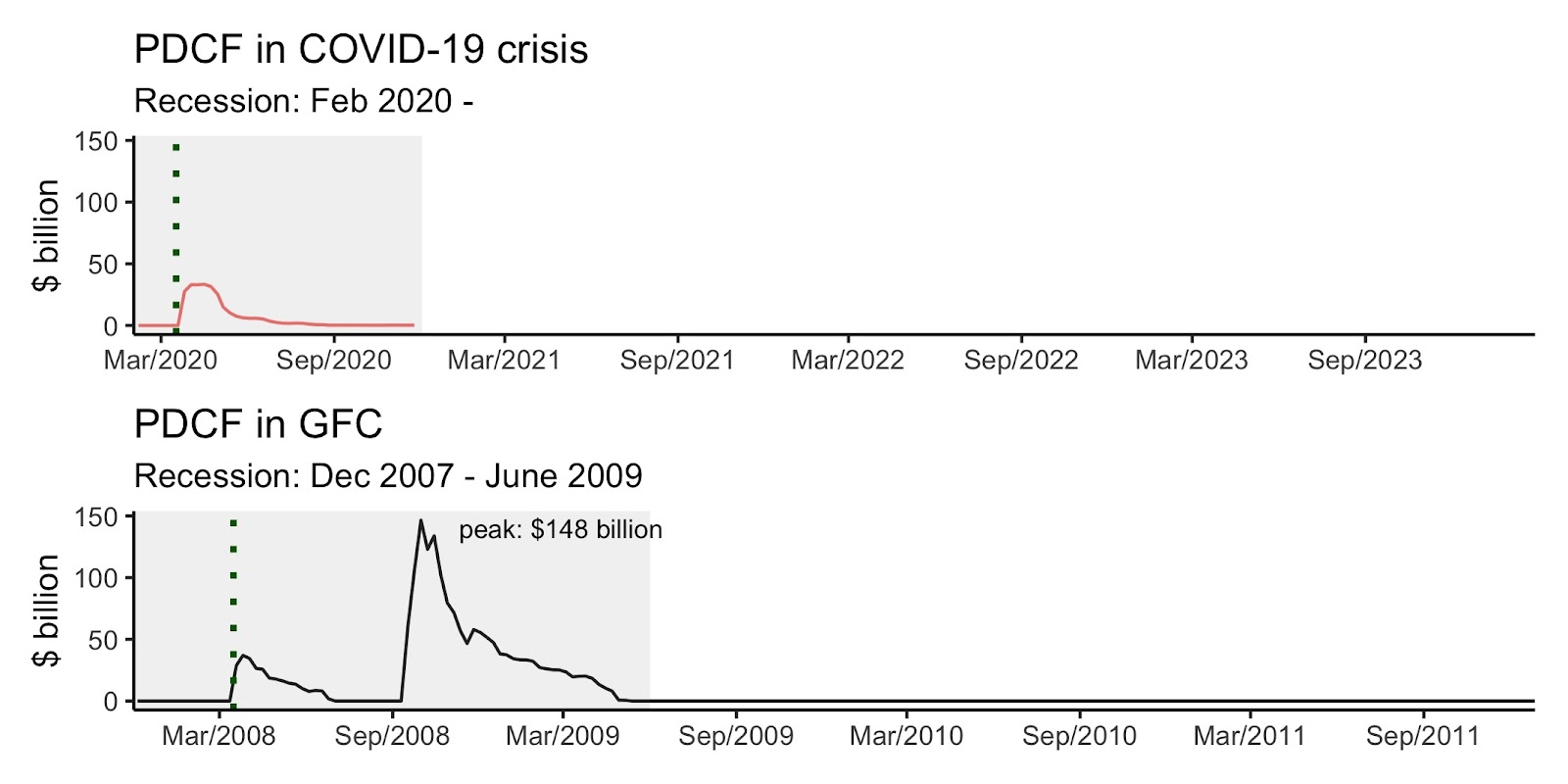 The PPPLF allows the Fed to provide financial institutions with liquidity backed by loans to small businesses extended under the federal government’s Paycheck Protection Program and guaranteed by the Small Business Administration. The PPPLF was established under Section 13(3). The facility had $55 billion in outstanding loans on December 2.

The CPFF provides a liquidity backstop to issuers of commercial paper and was also established under Section 13(3). It is operated by the NY Fed through a special purpose vehicle, the Commercial Paper Funding Facility II LLC (CPFF II LLC). The Treasury has made an equity investment of $10 billion in CPFF II LLC. The facility had no outstanding loans on December 2. 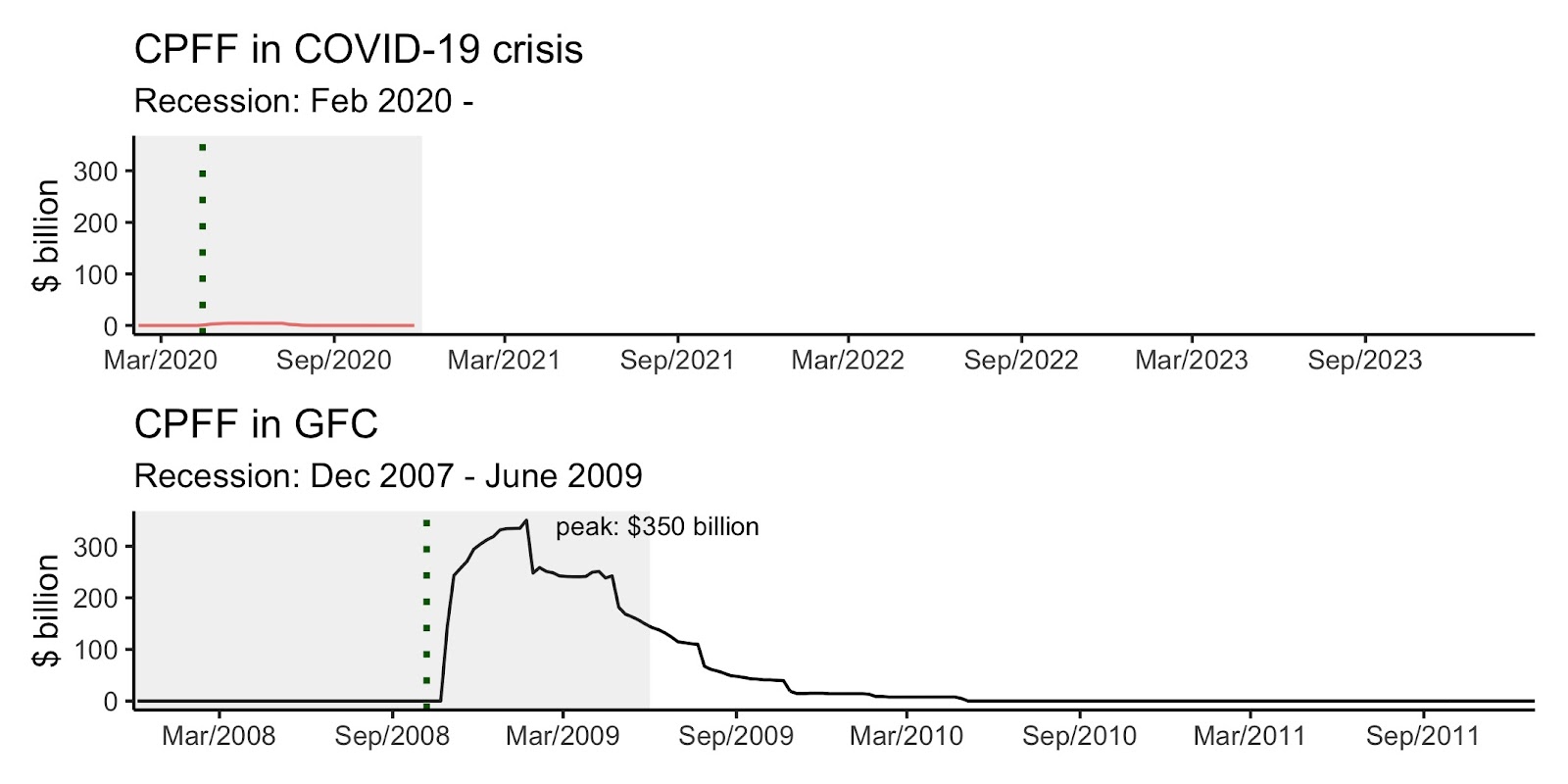 The PMCCF and SMCCF were set up under Section 13(3) to support credit to employers through purchases of newly issued bonds and support market liquidity for outstanding corporate bonds. These facilities operate through a special purpose vehicle, the Corporate Credit Facilities LLC (CCF LLC). The Treasury has made an equity investment of $37.5 billion in CCF LLC. The SMCCF had $13.9 billion in outstanding assets on December 2.  The PMCCF has not extended any credit to date.

The MLF provides liquidity to states, counties, and cities. The facility was set up to purchase up to $500 billion of short-term notes and was established under Section 13(3). The Treasury has made an equity investment of $17.5 billion in MLF LLC. The facility had $1,454 million in outstanding loans on December 2.

The TALF is established under Section 13(3) to provide liquidity collateralized by asset-backed securities (ABS). Under the facility, the Federal Reserve lends to holders of certain AAA-rated ABS. The facility operates through a special purpose vehicle to extend its loans, the Term Asset-Backed Securities Loan Facility II LLC (TALF II LLC). The Treasury has made an equity investment of $10 billion in TALF II LLC. The facility had $3,548 million in outstanding loans on December 2. 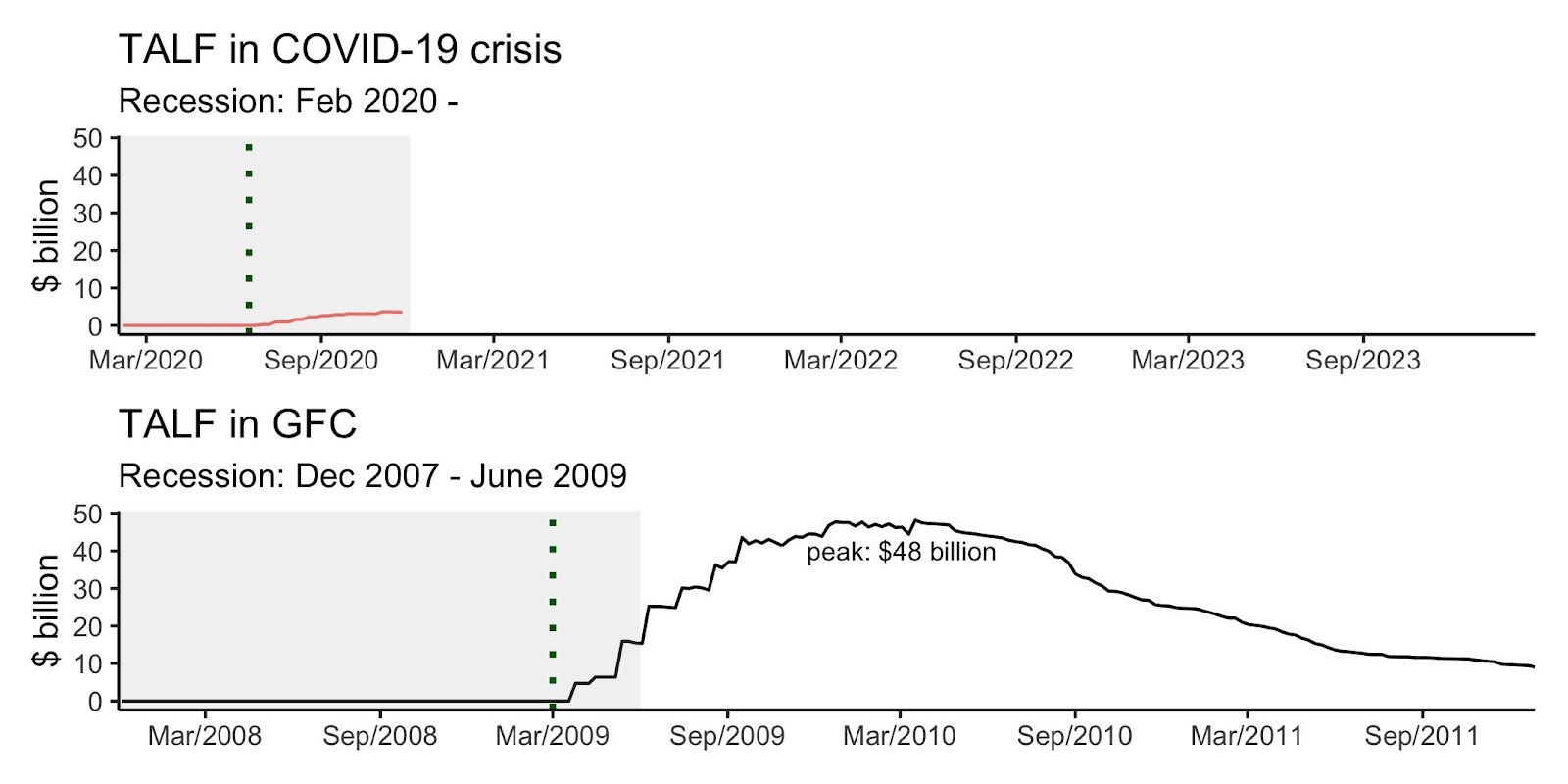 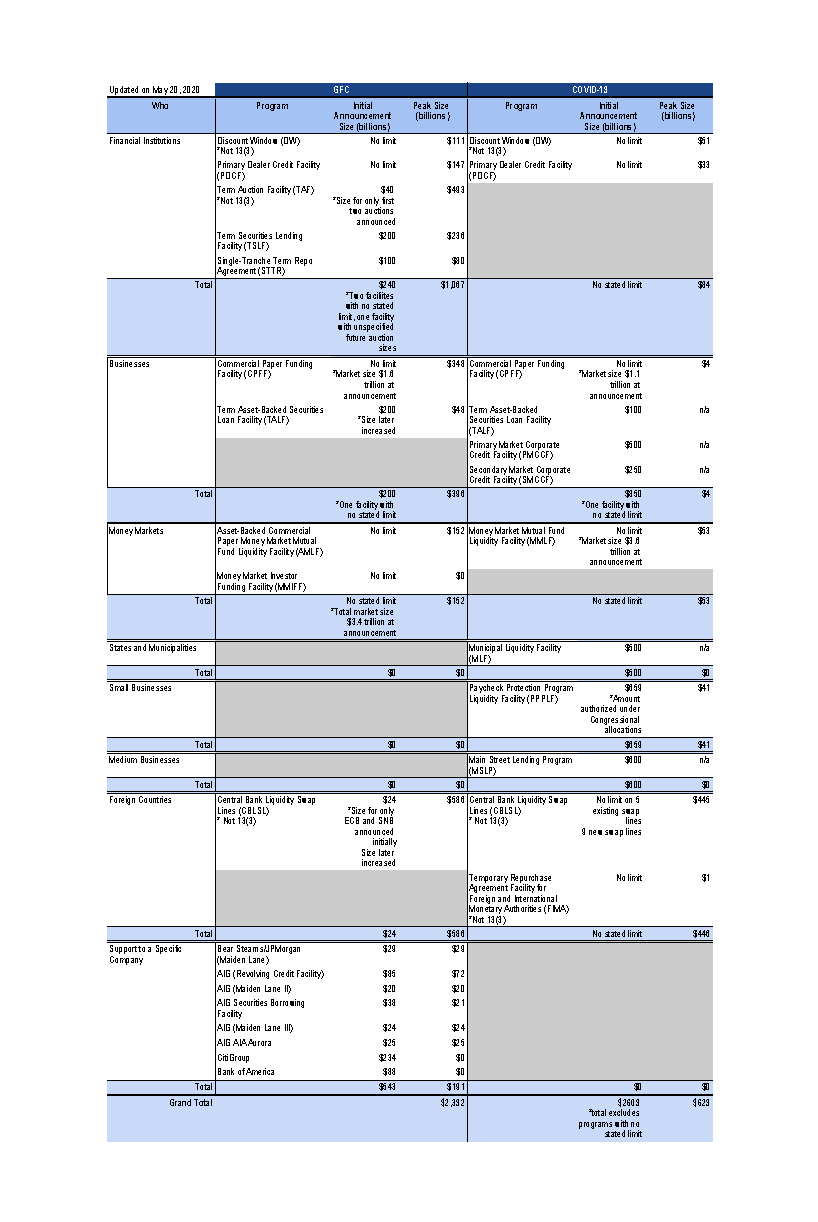