Below we report on operational Fed programs, based on the Fed’s weekly H.4.1 release. The use of lending facilities has declined to $97.4 billion. The use of swaps also continued to decline, and is now at 7% of the peak amount.

As of October 22, the Fed’s liquidity programs had $94.7 billion in outstanding loans. The total outstanding has not changed much compared to $97.4 billion, the outstanding amount at September, the last time we reported the usage (see the post here).

On October 19 and 23, the Federal Reserve Bank of New York (NY Fed) announced additional counterparties for CPFF and SMCCF, in addition to the agency commercial mortgage-backed securities (agency CMBS) purchases. This follows the statement in July, which announced an initiative to expand the set of counterparties for CPFF, SMCCF, and the TALF. The NY Fed explained that the newly added firms represent a diverse range of market participants, including Minority, Women, and Veteran Business Enterprises (MWVBEs).

The additional commercial paper dealers for the CPFF are:

The additional eligible sellers for the SMCCF are:

Over the past month, central banks continued to reduce their use of the Fed’s USD swap lines. The reduction is partially due to the expiration of 84-day swaps entered during the early weeks of the crisis. Auctions for these swaps were conducted weekly. As these contracts are reaching maturity, the total outstanding amount declined. As of October 21, the total amount still outstanding is $6,799 million. Compared to the peak on May 27, this is a 98% drop, reflecting the low demand of the swap lines these days. 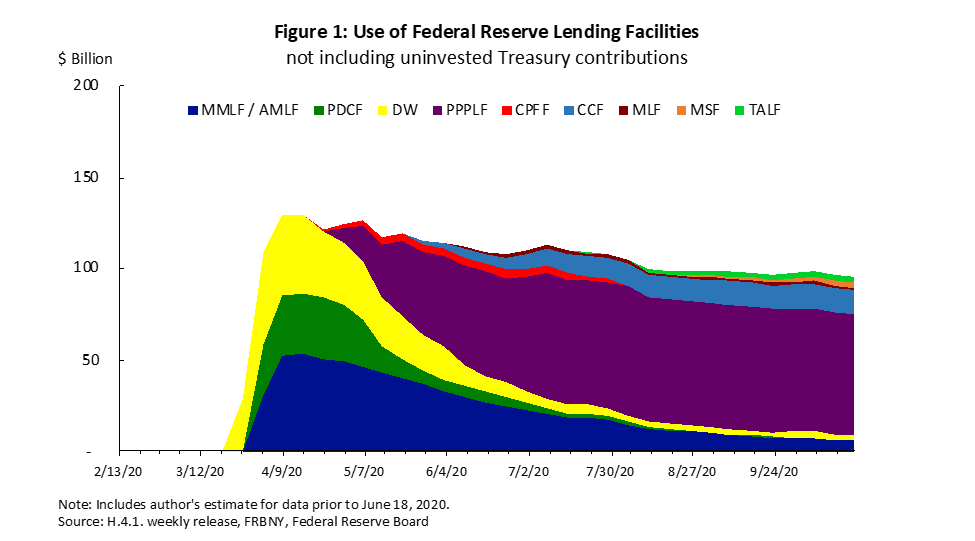 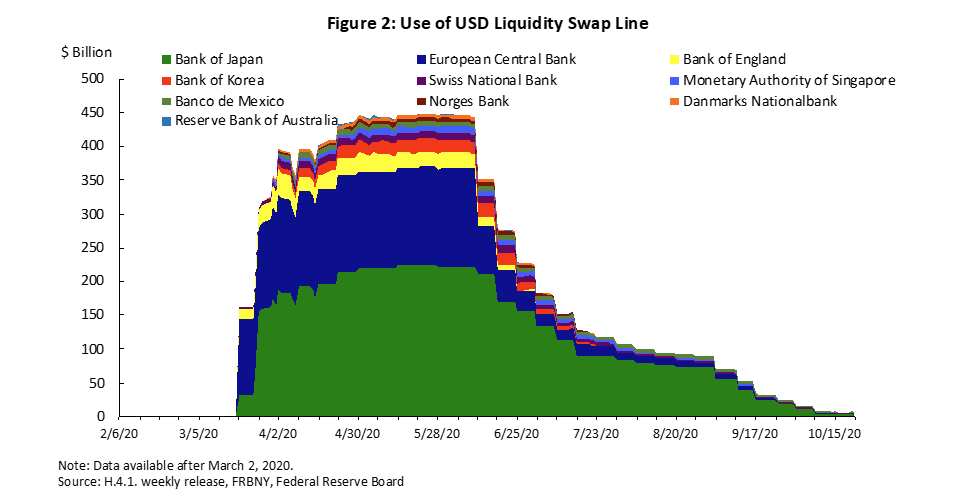 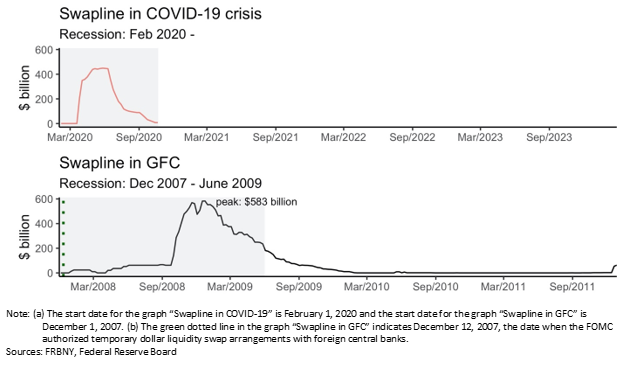 The MMLF allows the Fed to fund the purchase of money market mutual fund assets. The program is established under section 13(3) of the Federal Reserve Act. The Fed reported that the U.S. Treasury, to date, has provided credit protection of $1.5 billion to the Money Market Mutual Fund Liquidity Facility. The facility had $5,740 million in outstanding loans on October 21. It is similar to the Asset-Backed Commercial Paper Liquidity Money Market Mutual Fund Liquidity Facility (AMLF) that the Fed launched during the GFC. The AMLF funded the purchase of ABCP from MMFs. In comparison, the MMLF is authorized to purchase a broader range of collateral. 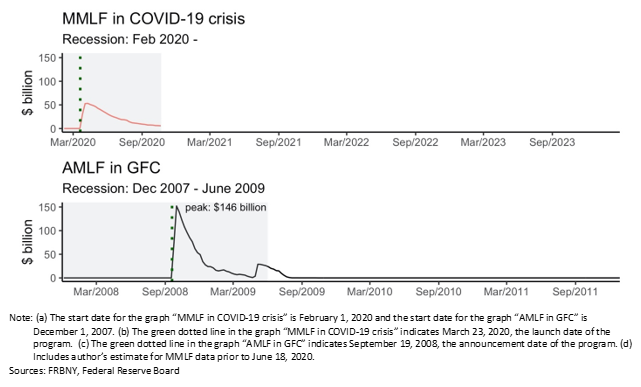 The DW is a standing facility that allows the Fed to provide collateralized loans to depository institutions. It had $3,146 million in outstanding loans on October 21. 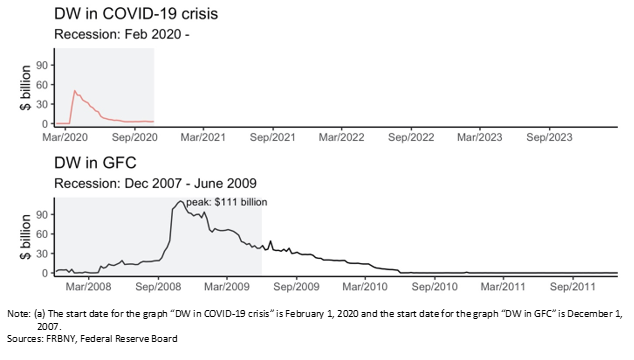 The PDCF allows the Fed to extend collateralized loans to primary dealers. The facility was established under section 13(3). The facility had $193 million in outstanding loans on October 21. 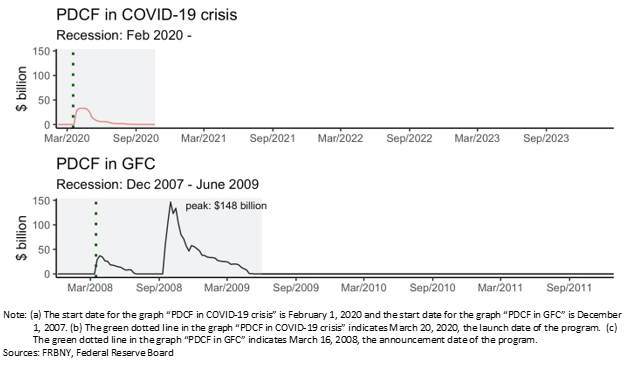 The PPPLF allows the Fed to provide financial institutions with liquidity backed by loans to small and medium-sized businesses extended under the federal government’s Paycheck Protection Program and guaranteed by the Small Business Administration. The Program was established under section 13(3). The facility had $64.1 billion in outstanding loans on October 21.

The CPFF provides a liquidity backstop to issuers of commercial paper and was also established under section 13(3). It is operated by the FRBNY through a special purpose vehicle, the Commercial Paper Funding Facility II LLC (CPFF LLC). The Treasury has made an equity investment of $10 billion in CPFF LLC. The facility had no outstanding loans on October 21. 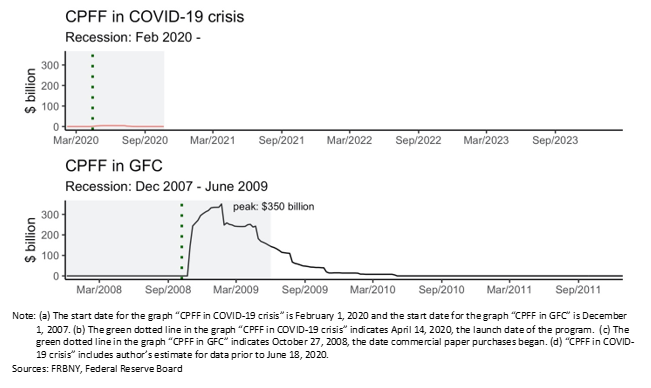 The PMCCF and SMCCF were set up under section 13(3) to support credit to employers through purchases of newly issued bonds and support market liquidity for outstanding corporate bonds. These facilities operate through a special purpose vehicle, the Corporate Credit Facilities LLC (CCF LLC). The Treasury has made an equity investment of $37.5 billion in CCF LLC. The SMCCF had $13.3 billion in outstanding loans on October 21.  The PMCCF has not extended any loans to date.

The MLF provides liquidity to states, counties and cities. The facility was set up to purchase up to $500 billion of short-term notes and was established under section 13(3). The Treasury has made an equity investment of $17.5 billion in MLF LLC. The facility had $1,651 million in outstanding loans on October 21.

The TALF is established under section 13(3) to provide liquidity guaranteed by asset-backed securities (ABS). Under the facility, the Federal Reserve lends to holders of certain AAA-rated ABS. The facility operates through a special purpose vehicle to extend its loans, the Term Asset-Backed Securities Loan Facility II LLC (TALF II LLC). The Treasury has made an equity investment of $10 billion in TALF II LLC. The facility had $3,159 million in outstanding loans on October 21. 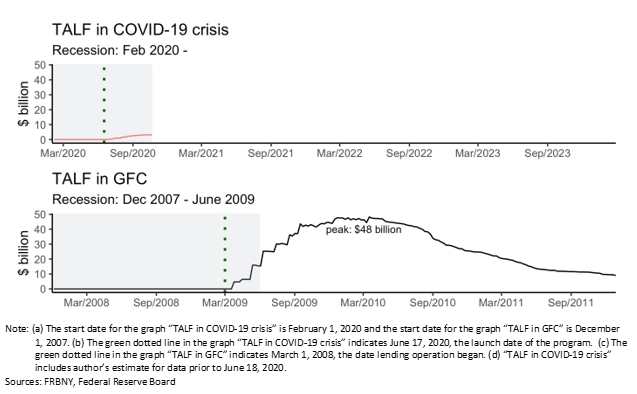 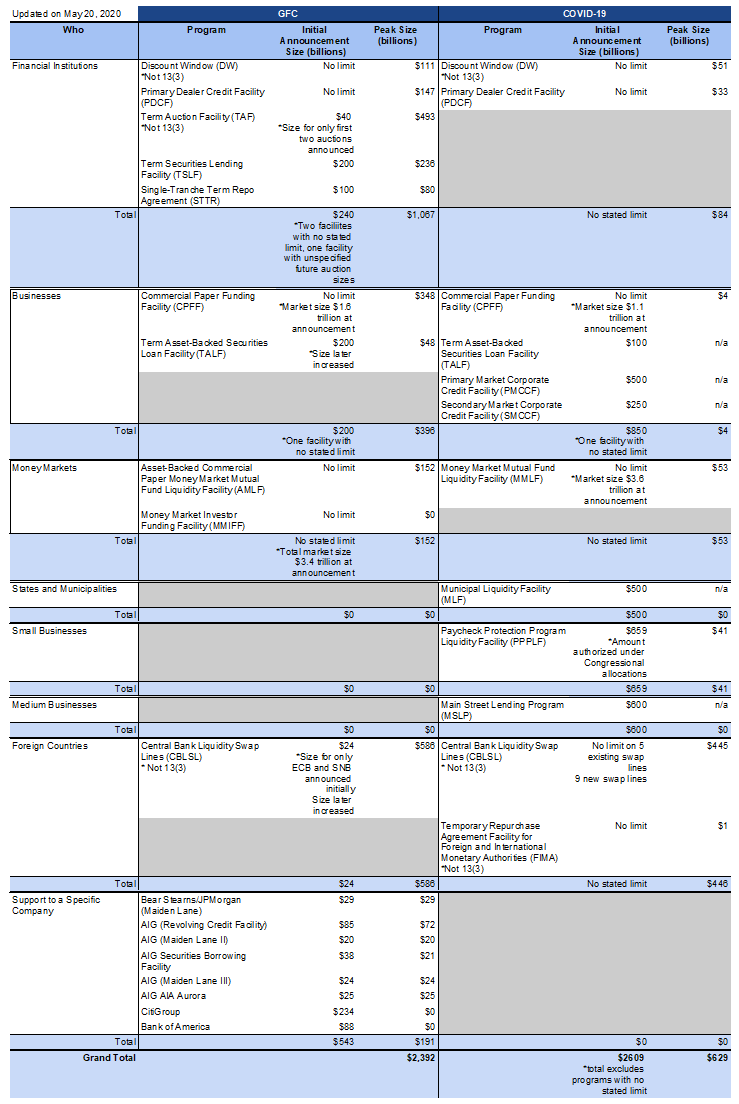