Below we report on operational Fed programs, based on the Fed’s weekly H.4.1 release. Since our last report, the use of lending facilities has increased to $94.8 billion. The use of the Main Street Lending Facility (MSF) surged before it, along with the other CARES ACT facilities, ceased new lending at the end of the year. The outstanding amount of the Fed’s U.S. dollar swap lines expanded to the end of the year, then dropped.

As of January 6 2021, the Fed’s liquidity programs had $94.8 billion in outstanding loans. The total outstanding has slightly increased from $92.6 billion on December 16, the last time we reported the usage (see the post here).

Figure 1-1 and 1-2 below show the outstanding amount of each facility, not including Treasury contributions that are invested in Treasury securities rather than loans to market participants.  Figure 1-1 shows the use of the lending facilities from early 2020 and Figure 1-2 shows the use in a shorter time period, from November 2020 to January 2021.

Figure 1-1 and 1-2 below show the outstanding amount of each facility, not including Treasury contributions that are invested in Treasury securities rather than loans to market participants.  Figure 1-1 shows the use of the lending facilities from early 2020 and Figure 1-2 shows the use in a shorter time period, from November 2020 to January 2021. 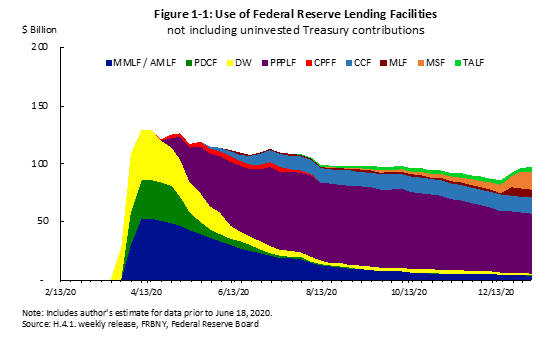 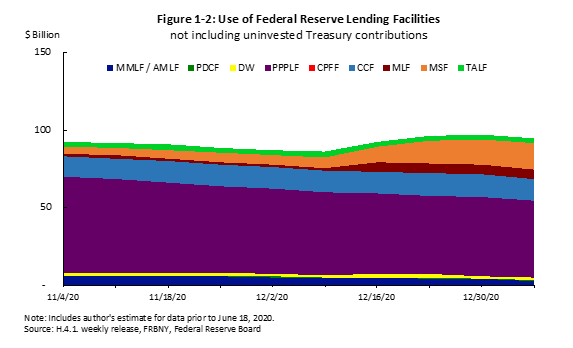 The use in four facilities (PDCF, CCF, TALF, and MSF) have increased since the last time we reported the usage on December 16.

Note on the CARES Act facilities (the PMCCF, SMCCCF, MSLP, MLF, and TALF)

The Fed’s lending facilities established under Section 13(3) can be categorized into three buckets: the PDCF and PPPLF do not have Treasury capitalization; second, the CPFF and MMLF have equity protection from pre-existing funds in the Treasury’s Exchange Stabilization Fund (ESF); and, third, the facilities for corporate bonds and loans, municipal bonds, and asset-backed securities (the PMCCF, SMCCF, MSLP, MLF, and TALF) have equity funding that the Treasury provided under the CARES Act.

As we have reported in details in our previous blog posts, (December 8 “The Uncertain Future of the Fed’s CARES Act Facilities” and December 22 “Redux: Outlook for 13(3) and Fed Crisis Response”), Treasury Secretary Steven Mnuchin announced that the Treasury would not extend the programs established under the CARES Act after December 31, and further requested the Fed to return the Treasury’s unused funds for those facilities. The “unused funds” are those that are not needed to meet the commitments, as of January 9, 2021, of the programs and facilities established under section 13(3)..

This means that approximately $62 billion of unused fund are expected to return to the Treasury. On January 5, 2021, the Federal Reserve returned a portion of Treasury's equity investment in the CCF, MLF, and TALF.

As of January 7, the amount returned, remaining capital contribution by the Treasury, and the current equity investments for CCFs, MLF, and TALS are shown in Table 1.

* 85% of the equity contributions.

On Dec 29, the Fed announced that it would extend termination date of the MSLP to January 8, 2021, so it can process and fund loans that were submitted before December 14, 2020. The surge in the number in mid-December suggests that eligible borrowers “rushed” to the program before it closed on December 31, 2020.

CPFF and MMLF, which are designed separately from the framework of the CARES Act, have equity protection from the Treasury’s pre-existing ESF funds; CPFF holds $10 billion of equity investment and MMLF holds $1.5 billion credit protection. 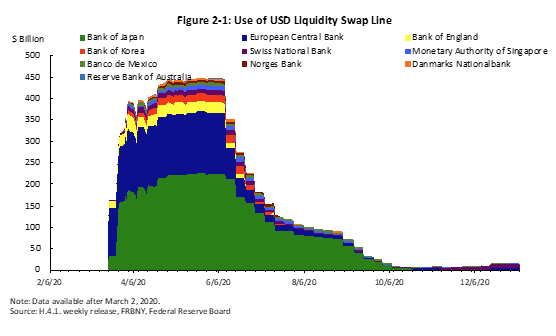 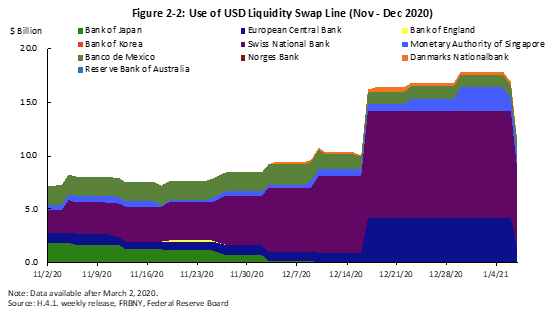 Central banks increased their use of the Fed’s U.S. dollar swap lines. As of January 7, the total amount outstanding is $11.2 billion. Compared to the peak on May 27, this is a 97% drop. As Figure 2-2 shows, from January 6 to January 7, the European Central Bank (ECB) and Swiss National Bank dropped their use of the swaps by $3 billion each. The Monetary Authority of Singapore (MAS) has also reduced its outstanding U.S. swaps. In terms of the share, Swiss National Bank was the largest user on January 7, accounting for 65% of the total swap use (Figure 2-3). 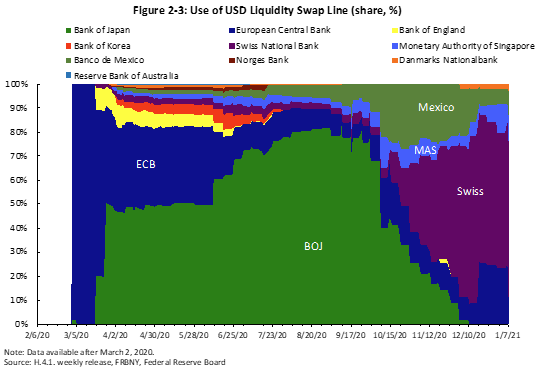 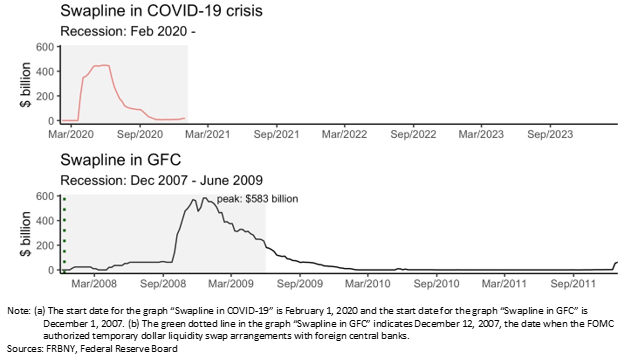 The MMLF allows the Fed to fund the purchase of money market mutual fund (MMF) assets. The program is established under Section 13(3) of the Federal Reserve Act. The facility had $2,496 million in outstanding loans on January 6. It is similar to the Asset-Backed Commercial Paper Liquidity Money Market Mutual Fund Liquidity Facility (AMLF) that the Fed launched during the GFC. The AMLF funded the purchase of ABCP from MMFs. In comparison, the MMLF is authorized to lend against a broader range of collateral. 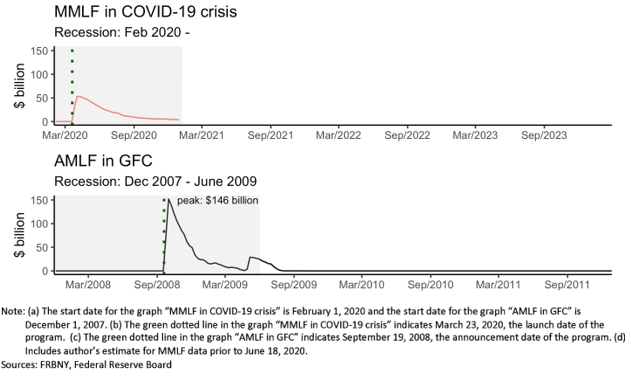 The DW is a standing facility that allows the Fed to provide collateralized loans to depository institutions. It had $1,485 million in outstanding loans on January 6. 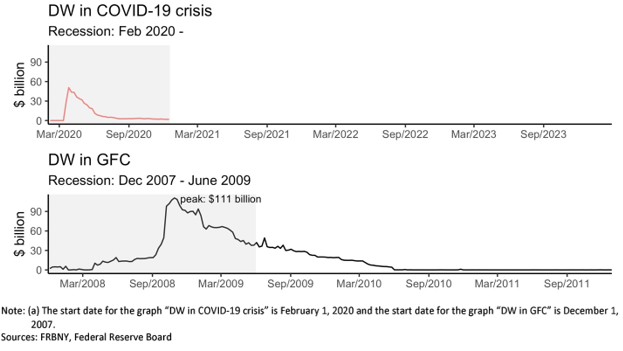 The PDCF allows the Fed to extend collateralized loans to primary dealers. The facility was established under Section 13(3). The facility had $485 million in outstanding loans on January 6. 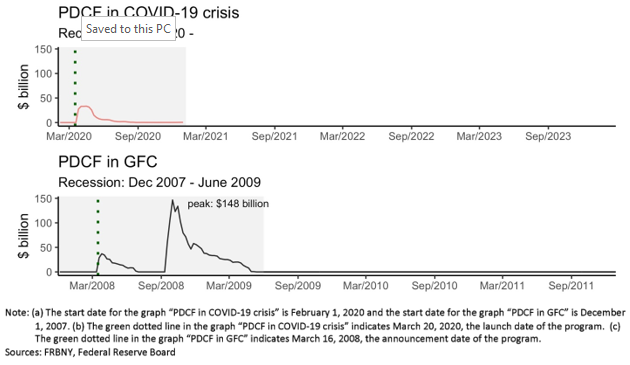 The PPPLF allows the Fed to provide financial institutions with liquidity backed by loans to small businesses extended under the federal government’s Paycheck Protection Program and guaranteed by the Small Business Administration. The PPPLF was established under Section 13(3). The facility had $49.8 billion in outstanding loans on January 6.

The CPFF provides a liquidity backstop to issuers of commercial paper and was also established under Section 13(3). It is operated by the Federal Reserve Bank of New York through a special purpose vehicle, the Commercial Paper Funding Facility II LLC (CPFF II LLC). The Treasury has made an equity investment of $10 billion in CPFF II LLC. The facility had no outstanding loans on January 6. 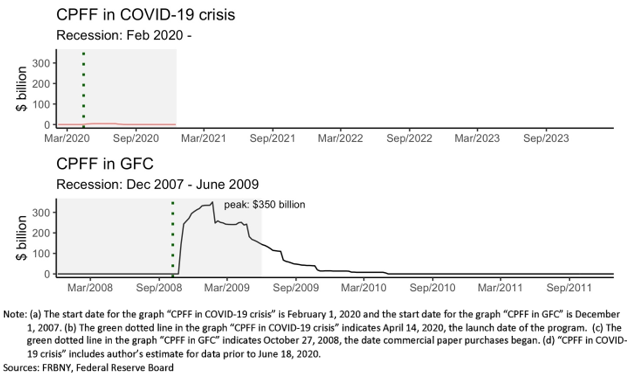 The PMCCF and SMCCF were set up under Section 13(3) to support credit to employers through purchases of newly issued bonds and support market liquidity for outstanding corporate bonds. These facilities operate through a special purpose vehicle, the Corporate Credit Facilities LLC (CCF LLC). The SMCCF had $14.2 billion in outstanding assets on January 6.  The PMCCF has not extended any credit to date.

The MLF provides liquidity to states, counties, and cities. The facility was set up to purchase up to $500 billion of short-term notes and was established under Section 13(3). The facility had $6,283 million in outstanding loans on January 6.

The TALF is established under Section 13(3) to provide liquidity collateralized by asset-backed securities (ABS). Under the facility, the Federal Reserve lends to holders of certain AAA-rated ABS. The facility operates through a special purpose vehicle to extend its loans, the Term Asset-Backed Securities Loan Facility II LLC (TALF II LLC). The facility had $3,458 million in outstanding loans on January 6. 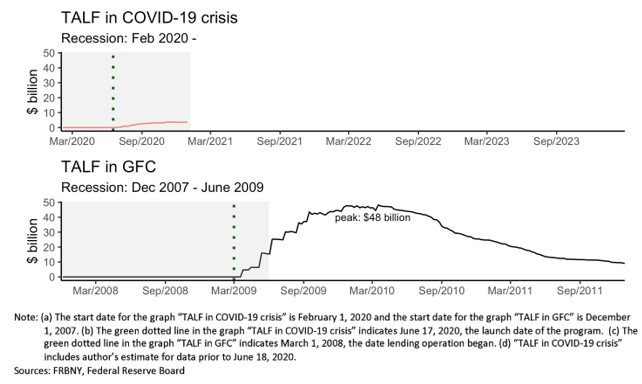 Also, see the summary Table from our Key Program Summaries.