On September 23, the United States House of Representatives Select Subcommittee on the Coronavirus Crisis released a report investigating corporate bond purchases by the Federal Reserve (Fed) in response to the economic downturn caused by COVID-19.

On March 23, the Fed announced for the first time in its history two facilities to purchase corporate bonds. The Primary Market Corporate Credit Facility (PMCCF) and the Secondary Market Corporate Credit Facility (SMCCF) were set up under section 13(3) to support corporate credit markets by purchasing individual corporate bonds, loans, exchange-traded funds (ETFs), and portfolios of bonds designed to achieve “broad exposure” to the market. The facilities serve two goals: providing liquidity to the outstanding bond market and supporting employers through the purchase of newly issued bonds.

The two facilities were created to respond to troubling trends in the corporate debt market. AAA-rated corporate credit spreads rose from below 50 basis points (bps) in January to over 200 bps by March 23. Contributing to these conditions were significant outflows totaling $174 billion from mutual funds and exchange-traded funds (ETfs) specializing in corporate debt. 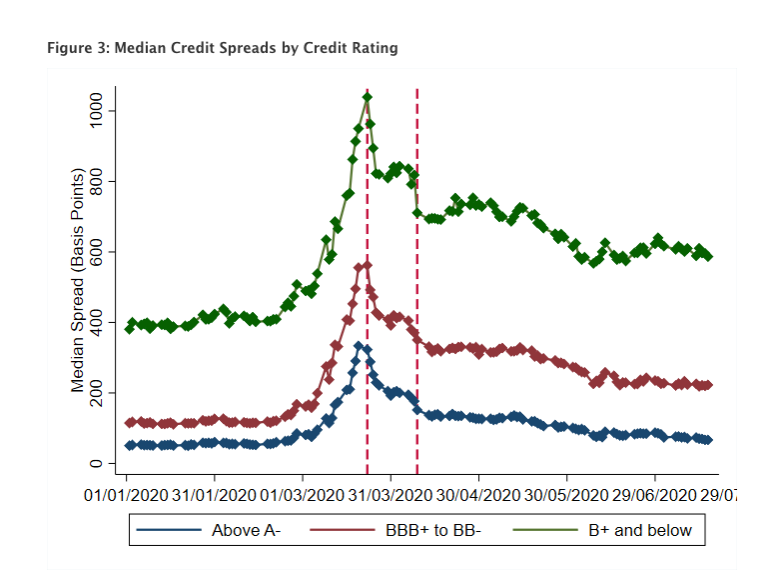 Both the announcement of the facility on March 23 and the announcement that the program was operational on April 9 led to tighter credit spreads (Figure 1). The SMCCF first purchased individual corporate bonds in June 2020. Between June and mid-July, the SMCCF purchased bonds from 500 large companies. However, PMCCF remains unused. For further details on the two facilities, read this YPFS blog post.

On September 23, the House Select Subcommittee on the Coronavirus Crisis published a report investigating the corporate bond buying program based on the Fed’s most recent disclosures. The report details four results of the investigation into the approximately 500 companies from which the Fed purchased bonds.

First, approximately 140 of the companies furloughed or laid off their employees, affecting around 1,001,000 workers. The report highlights Boeing, a company that turned down CARES Act funds, which came with restrictions on executive compensation and job retention, and instead issued corporate bonds. The Fed later purchased Boeing’s bonds on the secondary market through the SMCCF program. In August, Boeing said it planned to lay off 10% of its workforce, approximately 16,000 workers.

Second, 383 companies whose bonds were purchased by the Fed paid dividends during the pandemic. Sysco Corporation, for example, laid off a third of its workforce a month before paying a dividend to shareholders.

Third, 227 companies were “accused of illegal conduct since 2017.”  Tyson Foods has been cited for labor violations 35 times and environmental standards violations five times since 2017.

The report noted that these results run against the language that the Fed has used to articulate the benefits of the two facilities. For example, Fed Chair Jerome Powell testified to Congress in June that “the intended beneficiaries of all of our programs are workers.”

A recent YPFS blog post details another concern about the two facilities. While the Fed stated that it would not directly buy bank bonds through the SMCCF, a review of recent disclosures shows that about 15% of its $12 billion holdings are bank bonds.