After the Federal Reserve released the results in December of its first mid-cycle stress test, designed to test large banks’ resilience against downside pandemic scenarios, it allowed large banks to resume share buybacks starting in the first quarter of 2021, subject to limits. Fed Governor Lael Brainard cast the lone dissenting vote, noting the risks to bank capitalization and lending of raising payout limits to a level that “nearly doubles the amount of capital permitted to be paid out relative to last quarter.” In the case of the six largest banks on the heels of strong trading and investment banking revenues, however, aggregate payouts are set to triple.

Distribution Limits Phased In and Out

As U.S. financial volatility soared at the onset of the pandemic in March, the country’s largest banks, after consultation with the Fed, committed to suspend share repurchases “to provide maximum support to individuals, small businesses, and the broader economy.” Share repurchases tend to account for about 70% of large U.S. banks’ capital distributions.

Following the results of the Fed’s annual stress test and an additional, pandemic-related “sensitivity analysis” at the end of the second quarter, the Fed issued its own blanket payout restrictions. Per the Fed’s conditions, the 34 largest banks were to suspend share buybacks, could not increase their dividends, and could not pay dividends larger than their average net income over the previous four quarters. As a result of this latter rule, Wells Fargo had to reduce its quarterly dividend. The Fed also announced it would conduct its first mid-cycle stress test, to specifically test large banks’ balance sheets against downside pandemic scenarios.

Upon releasing the results of the mid-cycle stress test in December, the Fed announced it was “extending the current restrictions on distributions, with modifications.” While the Fed would continue to require that dividends remain static and total payouts not exceed recent income, it would no longer mandate a ban on share repurchases as of the first quarter of 2021. In short order, several large banks announced plans to resume share buybacks in 2021. The ultimate buyback amounts would depend on fourth quarter earnings, per the Fed’s restrictions.

Following their fourth-quarter earnings releases this month, Bank of America, Citi, Wells Fargo, Goldman Sachs, and Morgan Stanley all stated their intent to execute share repurchases in an amount consistent with the Fed’s newly loosened restrictions. JPMorgan’s CFO Jennifer Piepszak said that the company had the capacity to buy back $4.5 billion in shares, but she was not certain that JPMorgan would “do the full amount.”

Goldman Sachs’s decision comes despite reporting a common equity tier 1 capital ratio that, at 13.4%, is below its total requirement of 13.6%. However, a large bank that falls into its uppermost layer of required capital—the so-called stress capital buffer—faces payout restrictions consistent with the blanket restrictions temporarily in place for all large banks. As such, Goldman faces the same income-based payout caps as its competitors currently do under the Fed’s temporary restrictions.

The graph below shows the Fed’s maximum quarterly payout permitted for each bank. Assuming banks proceed with their buyback plans for the first quarter (and with the possible exception of JPMorgan), these limits also demonstrate the actual level of payouts that banks will have effected. 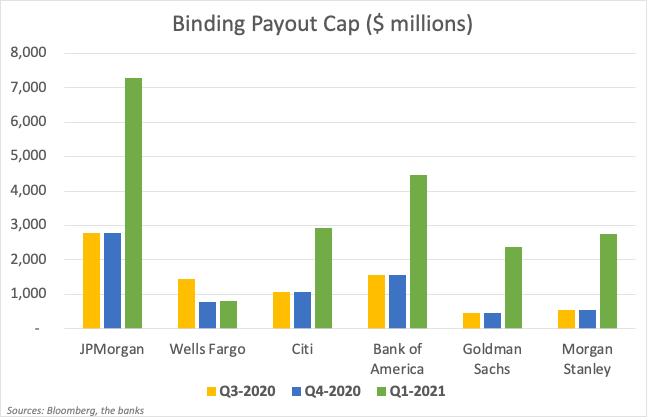 Since suspending share repurchases near the end of the first quarter of 2020, the largest six banks have paid out approximately $22 billion to common shareholders. This quarter, banks can disburse up to about $21 billion. 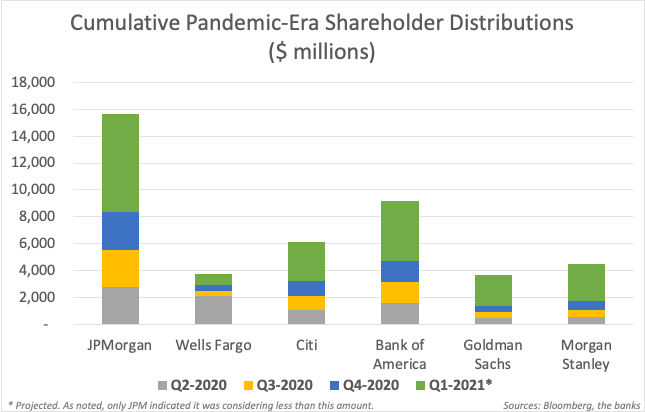 The Path for Bank Capital

While the Fed received mixed reactions to its decision to allow share buybacks to resume, including the internal dissent from Governor Brainard, it did leave a limit in place. The Fed permitted banks, going forward, to make total shareholder distributions—dividends plus buybacks—only up to 100% of recent income, saying, “The modified restriction will continue to preserve capital.”

Despite making payouts only out of recent income, bank capital levels could still fall as a result of these shareholder distributions. The allowable payout formula averages the bank’s previous four quarters of income. Thus, if a bank’s income falls going forward, its payouts that quarter could exceed that quarter’s income, leading to falling capital. This may become relevant to bank capital levels this year: several bank executives noted factors that portend lesser earnings in upcoming quarters (see, for instance, here, here, and here).

Several executives said that the elevated earnings from their trading desks are unlikely to continue as the pandemic-induced market volatility subsides. Some executives similarly expected loan demand to fall. Furthermore, several banks booked material releases of loss reserves as loans have held up better than they expected at the pandemic’s outset. Banks have discretion when booking this kind of income, and it is non-recurring. JPMorgan CEO Jamie Dimon said of reserve releases boosting net income, “We don’t consider it profit. It’s ink on paper.”

Banks entered this crisis with historically high levels of capital, materially expanded credit over the course of this crisis, have demonstrated strong earnings in recent quarters, and passed the Fed’s pandemic-specific stress test—all of which would suggest the Fed’s discretionary, blanket payout restrictions are not necessary. On the other hand, these shareholder distributions also raise the risk of banks yet becoming undercapitalized if the COVID-19 crisis continues to stress the economy and the financial system for an extended period. As Boston Fed President Eric Rosengren said in 2010 with respect to the early days of the Global Financial Crisis, “Regulatory dividend policy was focused on the ability of banks to pay dividends out of earnings. However, earnings declines occurred later than the financial market responses to emerging problems.”

The Fed’s December announcement did not offer any guidance on payout restrictions beyond the first quarter of 2021. While it’s uncertain how much banks would increase payouts if the Fed removed the restrictions, it’s clear the Fed’s limits are directly influencing the dollar amount of the largest banks’ payouts.