The stress test results released in June found that all large banks were “sufficiently capitalized.” However, that stress test was based on banks’ year-end 2019 balance sheets and thus did not take into account the historic economic volatility experienced in the spring of 2020 associated with the coronavirus pandemic. Indeed, by the June release date, several economic variables had already moved more adversely than the Fed had anticipated in its most extreme stress test scenario.

The previous “severely adverse” scenario started in the first quarter of 2020. It featured a hypothetical severe global recession in which the U.S. experienced seven successive quarters of negative real GDP growth and its unemployment rate rose by 6.5 percentage points to 10%, among other stressors.

The new “severely adverse” scenario starts in the third quarter of 2020. It includes 24% annualized growth in GDP in this quarter, followed by five successive negative growth quarters and unemployment rising 3 percentage points to 12.5%.

Instead of basing the unemployment shock on the June 30 unemployment rate of 13.5% consistent with the start date of the stress test, the Fed has used the Blue Chip Economic Indicators forecast for September 30 unemployment of 9.5%. The Fed ascribed this adjustment to its release of these scenarios coming late in the third quarter (footnote 5).

In its choice of a 3 percentage point increase, the Fed cites its “Scenario Design Framework, which calls for a smaller increase in the unemployment rate when the unemployment rate is already elevated.” In the Fed’s Scenario Design Framework for Stress Testing (12 CFR 252, Appendix A), the Board states unemployment should be raised 3 to 5 percentage points in the severely adverse scenario, with the final number pending the Board’s view of “cyclical systemic risks” and whether the initial unemployment rate was seen as high or low, subject to a 10% floor. This approach is intended to “avoid adding sources of procyclicality to the financial system.”

Banks’ capital plans will also be subject to an “alternative severe” scenario in which unemployment increases less—to 11%—but is slower to recover, falling just 2 percentage points to 9% by September 2023. This scenario features just one quarter of GDP decline—by 9.1%—following a 24% increase in the current quarter. 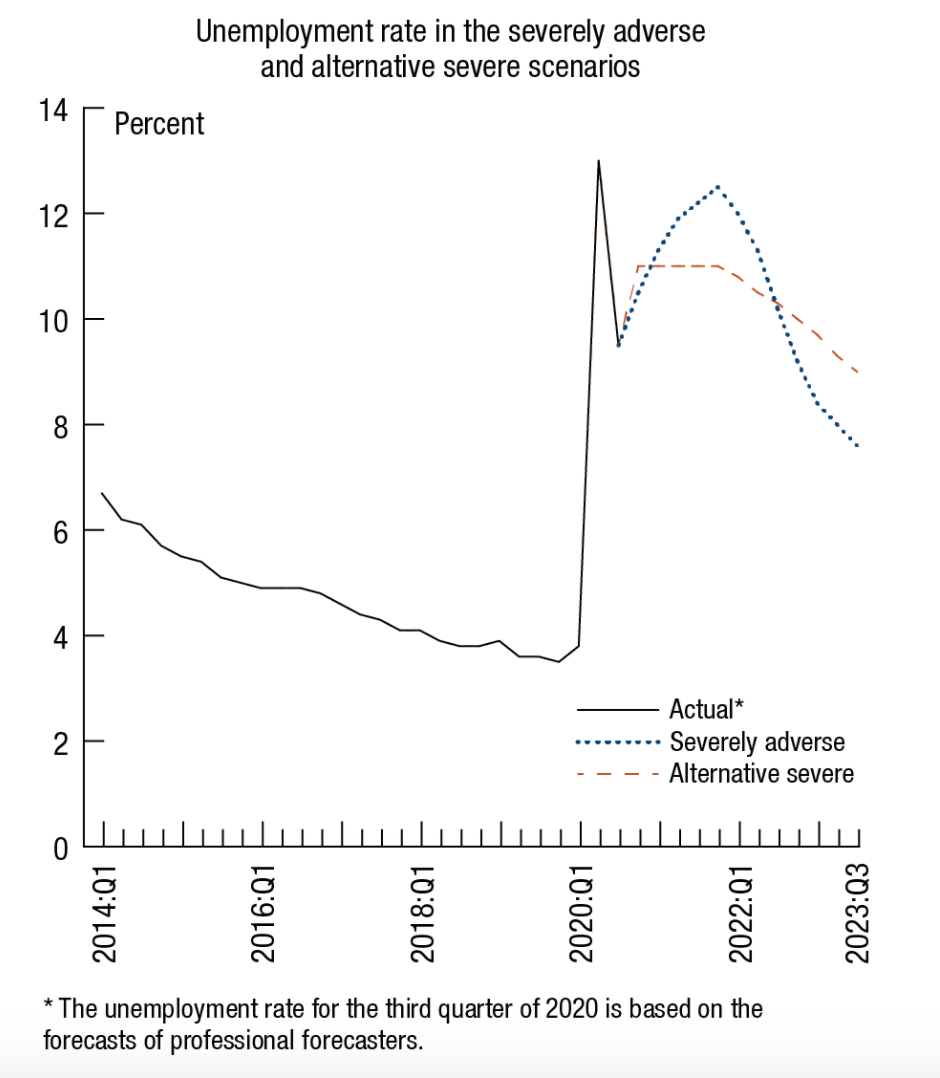 The Fed described the alternative severe scenario’s stressors as “comparable to those for the W- and U-shaped” scenarios in the “sensitivity analysis” it released alongside the June stress test results. Without a complete coronavirus stress test designed at the time, the Fed released the sensitivity analysis to approximate banks’ resilience to the updated reality of the pandemic—which had precipitated marked growth in bank balance sheets and macroeconomic shocks more severe than anticipated by the annual stress test.

The sensitivity analysis included “V”-shaped, “U”-shaped, and “W”-shaped stress scenarios, of which the latter two were the most adverse. Notably, the W-shaped scenario resulted in about 25% of the tested banks falling below the common equity Tier 1 regulatory minimum ratio of 4.5% of risk-weighted assets. The sensitivity analysis also excluded the impact of the capital distributions already paid by the banks in the first half of the year (p. 14).

While the Fed did not release bank-specific results for the sensitivity analysis in June, its September 17 press release stated that it intends to do so for the updated stress test—as per its usual stress test protocol. The Fed intends to release these results by the end of the year.

Furthermore, the Fed stated it will decide by the end of September whether to extend the capital conservation measures it put in place for the third quarter following the June results. The Fed in June suspended bank share repurchases for the third quarter and limited dividend payouts to the lesser of the second quarter payout and a bank’s average net income over the previous four quarters. Of the eight U.S. global systemically-important banks (GSIBs), only Wells Fargo cut its dividend in the third quarter.