US Begins Airline and Aviation Interventions

The Yale Program on Financial Stability has produced and will continue to update a spreadsheet to assist those contemplating programs for support to airlines and other critical industries. The spreadsheet catalogs current examples of crisis-focused support programs, identifies interesting features, summarizes existing evaluations of programs, and shares general resources on the topic. This spreadsheet can be accessed here.

On April 20, the U.S. Treasury Department announced that it had finalized agreements with six major airlines—Allegiant Air, American Airlines, Delta Air Lines, Southwest Airlines, Spirit Airlines, and United Airlines—for $20.5 billion in assistance under the Payroll Support Program (PSP) established by the CARES Act. It said five other airlines plan to participate, which would bring participation to 95% of U.S. air carrier capacity.

Four airlines—Hawaiian Airlines, United Airlines,  American Airlines, and Spirit Airlines—have also announced their intent to apply for $10.4 billion under the Economic Relief Program (ERP). The government has disbursed an additional $9.1 billion in aid to aviation-related industries through other programs, which like the ERP, are authorized under the CARES Act..

Presently, the CARES Act is one of the only broad-based grant and loan programs for airlines that governments have established during the current COVID-19 crisis. (See the earlier YPFS blog on the CARES Act here and our blog on aid to airlines around the world here).

The government has standardized its approach in providing aid to larger carriers. Treasury has decided to allocate 70% of funds through grants and 30% through low-interest, 10-year loans. This ratio was hotly negotiated, as airlines had expected that the support would exclusively come as grants. However, Treasury determined that larger airlines should compensate taxpayers for the large sums allocated.

The table below shows the terms of the PSP awards announced publicly or filed through the SEC, including announced expected agreements with the Treasury by Alaska Airlines, Hawaiian Airlines, and JetBlue Airways. Note that data are not yet available for Frontier Airlines and SkyWest Airlines, the two other airlines that Treasury expects to participate.

Airlines must use PSP funds exclusively to pay employee wages, salaries, and benefits. They must also agree not to conduct involuntary layoffs or furloughs, or reduce pay rates and benefits through September 2020; to not engage in stock buybacks or dividend payments through September 2021; and to limit certain executive compensation through March 2022. The government will not forgive PSP loans, which mature in ten years, but which may be prepaid without penalty at any time.

The CARES Act provides that the government “may receive warrants, options, preferred stock, debt securities, notes, or other financial instruments” from the airlines in exchange for PSP support. The Treasury has decided it will only take equity interests in airlines that receive more than $100 million in PSP aid. So far, the government has taken those equity interests in the form of warrants exercisable for common shares at their April 9, 2020 prices, at any point over a five-year period.

On April 20, the Treasury announced that it had released initial disbursements under the PSP, totalling $2.9 billion, to two major airlines and 54 smaller ones. Over 230 airlines have applied for assistance under the PSP, and Treasury is still processing applications. If applications exceed the amount authorized for any category of eligible participants, the Treasury has stated that it may adjust award amounts and related components on a pro rata basis.

Four airlines have said they intend to participate in the ERP. Treasury has accepted the application of one airline, Hawaiian Airlines; Treasury has yet to reach an agreement with two others, United Airlines, American Airlines, and Spirit Airlines.

Loans under the ERP are secured, would bear interest at the market rate before the COVID-19 outbreak, and would be for a five-year term. ERP participants must establish that they have exhausted other available credit. They must also agree to not engage in stock buybacks or pay dividends until 12 months after they pay off the loan; maintain workforce levels at 90% of their March 2020 levels until September 30, 2020; adhere to government restrictions on executive compensation; and maintain certain specified services. The ERP also mandates that Treasury receive warrants from participants whose stock trades on a national exchange (an optional stipulation under the PSP). For other participants, receipt of an equity interest in the form of a warrant or a senior debt instrument is at the secretary’s discretion.

In line with requirements to exhaust all other sources of funding, two airlines, Alaska Airlines and United Airlines, have secured external funding from major banks. Wells Fargo lent Alaska Airlines $425 million via a senior secured loan with an interest rate based on LIBOR plus an increasing margin over the duration of the loan. The loan extends for 364 days. Similarly, Bank of American has lent United Airlines $250 million, with an interest rate no lower than 2% that increases over the duration of the loan, to be extended through April 6, 2021. Through Citibank, Spirit Airlines entered into a revolving credit facility for an initial commitment amount of $110 million, and borrowed an additional $25 million on April 20th.

In addition to aid to airlines, the CARES Act allocates $17 billion for aid to Boeing (although not explicitly named), the largest national defense contractor and aircraft supplier. Manufacturers are feeling the reverberations of depressed demand, with cancelled orders for major suppliers and cuts in production, leaving many manufacturers requesting aid from governments around the world. The chart below visualizes the global connections between the top suppliers and the largest airlines, and the number of airlines they supply. 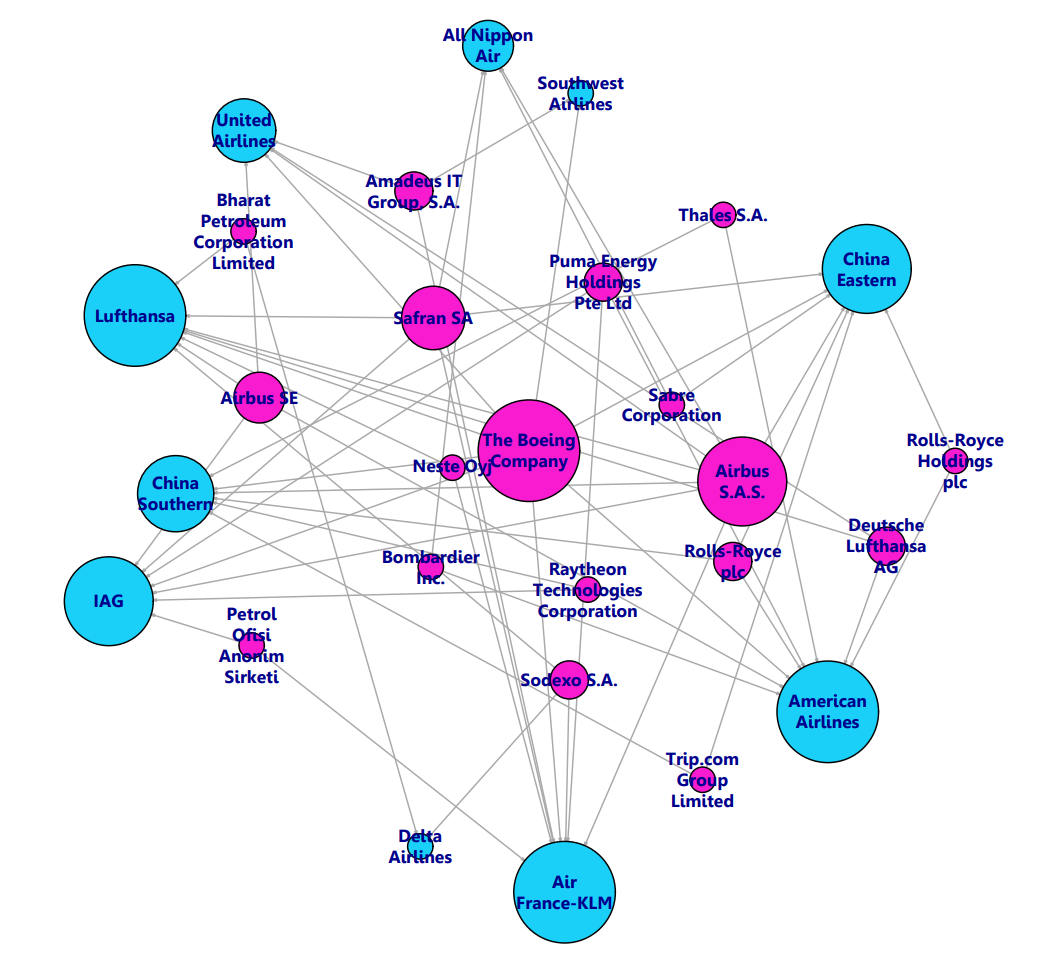 Source: SNL. Node size is weighted by the number of connections to other nodes.

Still under negotiation with the Treasury, a potential aid package for Boeing has hit a roadblock as CEO Dave Calhoun opposed providing the US government an equity stake in exchange for aid. It’s unclear whether negotiations will resume or conclude in the near future.

The US’s CARES Act also suspends an array of airline excise taxes through the end of 2020. Although the tax relief is estimated to amount to $8 billion in aid, it is dwarfed by the other aid given to the industry under the CARES Act. Private jet companies are expected to be the greatest beneficiaries of the suspension in excise tax.

Finally, Title XII of the CARES Act provides the Federal Aviation Administration (FAA) $10 billion in aid to be awarded as grants as economic relief to commercial service airports and general aviation airports.  All airports receiving funding through the FAA must maintain, through December 2020, at least 90% of the individuals employed as of March 27. As of April 15, the FAA has awarded $9.1 billion to over 3,000 airports across the United States.