India’s urban cooperative banks (UCBs), which have total assets of more than US$81.5 billion as of March 2019, will now be able to issue equity and will be subjected to additional supervision by the Reserve Bank of India (RBI) under a new regulatory regime that the government introduced in June.

On June 26, India’s Union Cabinet put forward “The Banking Regulation (Amendment) Ordinance, 2020,” a policy that could change the regulatory landscape for India’s banking sector permanently if India’s parliament passes it into law by the end of September.

After ten years of mounting urban cooperative bank failures and consolidation, these cooperative banks need new money badly and allowing UCBs to issue equity also allow the market to judge the corporate governance of these banks. The RBI’s new powers under the ordinance also make it easier for the central bank to supervise UCBs and help improve their corporate governance.

All-in-all, cooperative banks only have about 4% of the assets of India’s banking system, based on 2019 data. However, cooperative banks are very important politically because they provide last-mile access to banking in impoverished and isolated areas. They constitute more than 99% of India’s credit institutions by number.

Rural cooperative banks (RCB), more accurately called rural cooperative credit institutions (as many are not technically banks), are financial institutions that were set up to provide credit to villages and small towns. RCBs can be divided into short-term and long-term lending institutions, based on the tenure of the loans they typically provide (See Figure 1). 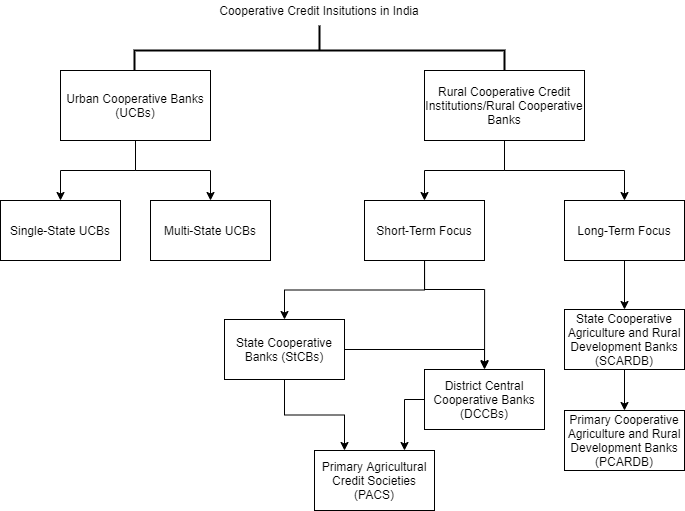 The short-term institutions are arranged in a three-tier structure (See Figure 1). The smallest institutions, at the base of the structure, are the Primary Agricultural Credit Societies (PACS) that provide short and medium-term loans at the village level. These are not registered as banks and therefore do not have access to liquidity from the RBI. District Central Cooperative Banks (DCCBs) monitor and lend to the PACS. These DCCBs, and the State Cooperative Banks (StCBs) above them, are regulated by state governments, the RBI, and the National Bank for Agriculture and Rural Development (NABARD).

State government Registrars of Societies have power over cooperative banks through their regulation of the cooperative societies that own the cooperative banks. Registrars of Societies can determine who is allowed to be a Director of a cooperative society. Before the recent government action, the RBI did not have the power to shuffle around the boards of cooperative banks. This made it extremely difficult to improve management practices. The RBI is the main regulator of banking activity, but it had NABARD serve as its agent when it came to inspecting rural cooperative banks. That may be because the RBI has not had the human resources to inspect tens of thousands of small banks. Many of these banks do not have a direct line to RBI liquidity, as many are not registered as banks or are not scheduled by the RBI (in other words, they do not have an account with the RBI). But they can rely on refinancing from NABARD so long as they continue to allow inspections. The other way that the RBI may regulate these cooperative banks comes from a policy change in the 1970s. Under these changes, some of the cooperative banks gained access to deposit insurance if their state government amended their laws to allow the RBI to inspect them. The problem with this arrangement is that not all of the state governments made the change and, unlike the Federal Deposit Insurance Corporation in the U.S., the deposit insurance corporation does not have the powers to affect resolution.

The long-term institutions are popularly known as land development banks and are organized in a two-tier structure (See Figure 1). They are not deposit-taking institutions and primarily use debentures to fund themselves. They ultimately rely on NABARD for funding. The smaller organizations here are called Primary Co-operative Agriculture and Rural Development Banks (PCARDB), which provide loans at the district or block level. Above them are State Co-operative Agriculture and Rural Development Banks (SCARDB), which act at the state level. Together, they aim to finance “medium to long-term loans for making investments in agriculture, rural industries, and lately housing.”

The term UCB is merely a label for the primary cooperative banks, which are primary credit societies (PCSs) that have been licensed by the RBI as banks. There is no formal definition for UCBs, but the term tends to refer to PCSs that are located in urban and semi-urban areas. They may or may not be scheduled with the RBI. Those scheduled with the RBI have direct access to liquidity from the RBI and the RBI gains many of its supervisory powers over these banks through this leverage.

In recent years, some UCBs have expanded aggressively into large cities, though the UCB sector as a whole has been plagued by bank failures. UCBs are regulated by a mix of state cooperative regulators and the RBI. While the RBI manages their banking activities, the corporate governance of the organizations is ultimately left to state regulators. This leaves the RBI largely powerless when it comes to stemming corporate governance problems before it is too late, as seen in the late 2019 collapse of Punjab & Maharashtra Co-operative Bank (PMC Bank). Years of collapsing cooperative banks have forced deposit insurance payouts to over 400,000 Indian depositors. Until the RBI puts the books of these banks in order, bank customers can endure months of withdrawal restrictions.

What does the Ordinance change?

The Ordinance amended the India Banking Regulation Act, 1949 to allow all cooperative banks to issue equity (through public issuance or private placement) as well as unsecured debentures or bonds. To issue such equity or debt, cooperative banks must receive approval from the RBI. The RBI also acquired the power to put conditions on the issuance of equity or debt securities by these banks. The RBI can also force cooperative banks to raise capital. In a way, this issuance of equity could lead cooperative banks in India down a road to “demutualization” similar to that experienced by U.S. savings banks. We do not yet know the details of what these new shares would look like (would they be issued with limited or unlimited liability, how would the expansion of the shareholder bank work, etc.).

Cooperative banks are prohibited from reducing or withdrawing share capital except in situations where it is required by the RBI. Cooperative banks cannot demand that surrendered shares be returned either.

The Ordinance also ended the exemption from portions of India’s Banking Regulation Act, 1949 that all cooperative banks previously enjoyed. Now, only PACS and “cooperative societies whose primary object and principal business is providing long-term finance for agricultural development” can receive the exemption. To qualify, these financial institutions cannot be banks (or use the words ``bank,” “banker,” or “banking” in their names or business) and cannot cash checks. This could bring urban cooperative banks under the Banking Regulation Act, 1949.

By placing these other banks under the Banking Regulation Act, 1949, the Ordinance extends many of the RBI’s powers over commercial or public-sector banks to UCBs. The government declared that this will “not affect existing powers of the State Registrars of Cooperative Societies under state co-operative laws,” though the RBI can now request the ability to supersede the board of a UCB registered under a state’s laws from that state’s government. The changes will also allow the RBI to prevail over bank management in cases of a conflict between the RBI and state cooperative regulators, who have traditionally been allied with cooperatives’ management.

One of the most important changes is the RBI’s new resolution mechanism for commercial banks and cooperative banks. Previously, the RBI was required to put a moratorium on depositor withdrawals when it was resolving or selling a failing commercial bank. In the case of PMC Bank, this restriction has kept depositors from being able to access their money for months. Now, the RBI can frame a resolution scheme for all banks “even without making an order of moratorium, so as to avoid disruption of the financial system,” according to the finance ministry.

Back in March, the RBI’s efforts to restructure YES Bank involved the imposition of a two-week moratorium that restricted withdrawals to INR 50,000 per depositor. This spurred a run on the bank and was only stopped when YES Bank was taken over by state-owned lender State Bank of India (SBI). Although India does have a deposit insurance program that now covers up to INR 500,000, the old rules required the RBI to risk panics by imposing moratoria on failing banks.

How has the change been perceived within India’s financial and regulatory communities?

Professor Ila Patnaik,  of India’s National Institute of Public Finance and Policy, is optimistic about the new rules related to issuing equity. She said that, with the ability to issue equity, “if you are a well functioning cooperative bank, you can actually grow,” and could become more accountable. She also reflected that it is good that the RBI is finally getting the regulatory powers it needs, but it will take time for it to build up the supervisory capacity to regulate these cooperatives effectively.

The same attorneys at the Madras High Court wrote in The New Indian Express that “The Ordinance has given the much needed legal impetus for regulation, revival, stabilization and recovery of the UCB sector which would enable the RBI to introduce Scheme's [sic] of reconstruction or amalgamation similar to the one drawn up in the case of Yes Bank.” These kinds of processes involve the purchase of a troubled institution by a larger, more stable one. It provides some kind of continuity to depositors in a similar way to the FDIC’s “purchase and assumption” method. The Indian government had state-owned lender State Bank of India recapitalize and achieve a controlling stake in Yes Bank.

Others see this Ordinance as a long time coming. They believe the Ordinance is effectively a version of a bill the government was about to pass before COVID-19 shut down the parliament. Issuing an Ordinance while the parliament was not in session allowed the government to push through the policy without interference from local interests.

However, they also worry that the carve-out for rural cooperatives will mean that agricultural depositors will not benefit from the improved governance that may come from these reforms in UCBs. They lament that, despite the Ordinance, UCBs might still be uncompetitive with other small finance banks and might still be subject to interference by cooperative society management. The Ordinance has already been challenged at the Madras High Court by two cooperative banks arguing that it infringes on the rights of states in India’s constitution.

What is the significance of this policy in light of COVID-19?

Although this policy was not a response to COVID-19, it will be a significant part of India’s financial recovery from COVID-19. Since lockdowns began in March, state governments and the RBI have been putting forward moratoriums on term loan repayments. When those moratoriums eventually cease, those banks are likely to face a tsunami of non-performing loans.