The Hult Prize at Yale

The Hult Prize @ Yale On-Campus Program is one oriented towards inspiring college students of all levels and fields of study to pursue opportunities to create an impact in the social enterprise space.

Each year, the Hult Prize Foundation announces an annual challenge for students to build business ideas around to find their way to the Hult Prize Accelerator event, where they have an opportunity to win $1,000,000 to get their venture up, running, and equipped to create positive change on a local or global scale. This year, the Hult Prize asked students around the world to build viable food enterprises that will create jobs, stimulate economies, reimagine supply chains, and improve outcomes for 10 million people by 2030.

The 2020-2021 year marked the first year that many On-Campus programs were planned and hosted entirely virtually, which proved a challenge for raising program awareness. “The goal of the program is to connect students across campus and inspire Yale community members to combine their diverse backgrounds and areas of study to develop unique teams capable of creatingt sustainable and potentially scalable solutions to the challenge of the year. This proved more difficult than expected in a fully virtual environment,” says Dalia Hammouri, this year’s On-Campus Director. Dalia, Lu Suo (Teams Coordinator), Michael Guan, and Linhang Ren (Judge Coordinators) worked together to plan this year’s On-Campus event for the Yale community. “The event wouldn’t have been possible without Lu, Michael, and Lin – our collective passion about the space and Yale’s entrepreneurial community was essential to the program’s ability to come to fruition”.

Despite the odds, students across Yale – from Yale College, SOM, and YSE – were still able to connect through mixer events hosted by the organizing committee and enroll in the HP@Yale On-Campus program. Of the five teams that participated, venture ideas ranged from teams looking to create software solutions for grocers, to those aiming to provide youth with knowledge and awareness of sustainable farming practices through the development of educational farms. Some teams came to the event with mere ideas, while others came presenting pre-established ventures. One of the latter was Qi Foods, founded by Tiffany Leong, a current student at the Yale School of Management (’21). Qi Foods’ aim is to make Chinese superfoods accessible in the mainstream Western market through a ready-to-drink superfood beverage line. Qi Foods received the runner-up position, following Fresh Out the Box – a subscription-based, East-Asian meal kit (ingredient-and-recipe) service that is centralized around authenticity, access, and education – which won first place in the 2021 Hult Prize @ Yale program. “Competing for the Hult Prize made me expand my view on how this start-up can both be for-profit and create a tangible impact on a global scale”, says Law about Fresh Out the Box.

The On-Campus event preparation season culminated in a 1.5 hour-long pitching event on January 14th, where each of the five participating teams gave a 5-minute pitch to our 4-member judge panel, followed up by a 5-minute Q&A session with the Judge Panel. The four community members that served on the HP@Yale program’s Judge Panel this year - Tagan Engel (Resident Fellow at the Yale Center for Business and the Environment and Exec. Producer @ The Table Underground Podcast), Mark Bomford (Director of the Yale Sustainable Food Program), Latha Swamy (Director of Food System Policy at the City of New Haven) and Charles Negaro Jr. (CEO of Atticus Bookstore Café and Chabaso Bakery) – brought deep insights and experience to participating students this year. More information about this year’s judges can be found at the Hult Prize @ Yale program’s website.

With Fresh Out the Box coming in first place and Qi Foods a close second, Carrie and her teammates – Alex Chun (Yale College ’21), Candace Huang (Yale SOM ’22), and Zeynep Yekeler (Yale SOM ’22), as well as Tiffany Leong and her teammates – Katherine Cai (Yale SOM ’21) and David Reddy (Yale SOM ’21) – will be representing Yale at the Hult Prize Regionals, which will be held virtually in the Spring of 2021. The two student-run and -led ventures will have the opportunity to cultivate connections with other social entrepreneurs that will span continents at the Regionals. 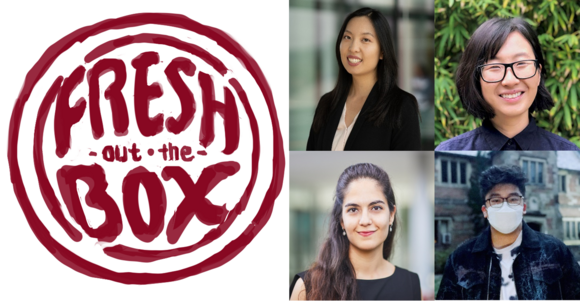 Hult Prize Regionals will be hosted globally – some virtually, and others not -  in 61 different locations this year, a record high for a competition which usually hosts Regionals in 15-25 locations globally; this affords teams globally the chance to choose to “attend” Regionals in any location they may choose in order to network and connect with others in their regions of interest. Some of this year’s locations include London, New York, Bangkok, Kuala Lumpur, Beirut, Delhi, Ramallah, Lima, Melbourne, Saint-Petersburg, Taipei, Santo Domingo, Amman, Tokyo, and Toronto. Winners of the Regionals are invited to a Summer Accelerator at a castle in the UK, which may be hosted virtually dependent on conditions of the COVID-19 pandemic.