A Long Way to Go for Emerging Markets

The developing world will soon become the frontlines in the battle against the coronavirus, and markets are bracing for the resulting fallout. The Covid-19 crisis has already had an unprecedented effect on emerging markets—more than 100 of the IMF’s member countries have already asked for aid: Simultaneous health and financial crises add fuel to the linkages between sovereign debt crises, banking crises, and growth and competitiveness crises. In this note, we discuss financial markets’ responses in the first months of the current crisis, the unique challenges EMs face compared to wealthier nations, and reasons for cautious optimism at the present moment.

Emerging and developing economies’ reported cases remained low in the initial stages of the pandemic as the virus migrated from China. However, in the past three weeks, confirmed cases in EMs have tripled to 630,000 cases compared to 1.9 million cases in developed economies (Figure 1, panel A). Looking across several measures—health care expenditures; the number of hospital beds, doctors and nurses; or GDP per capita—it’s clear EM’s health infrastructure is less equipped to manage the virus. 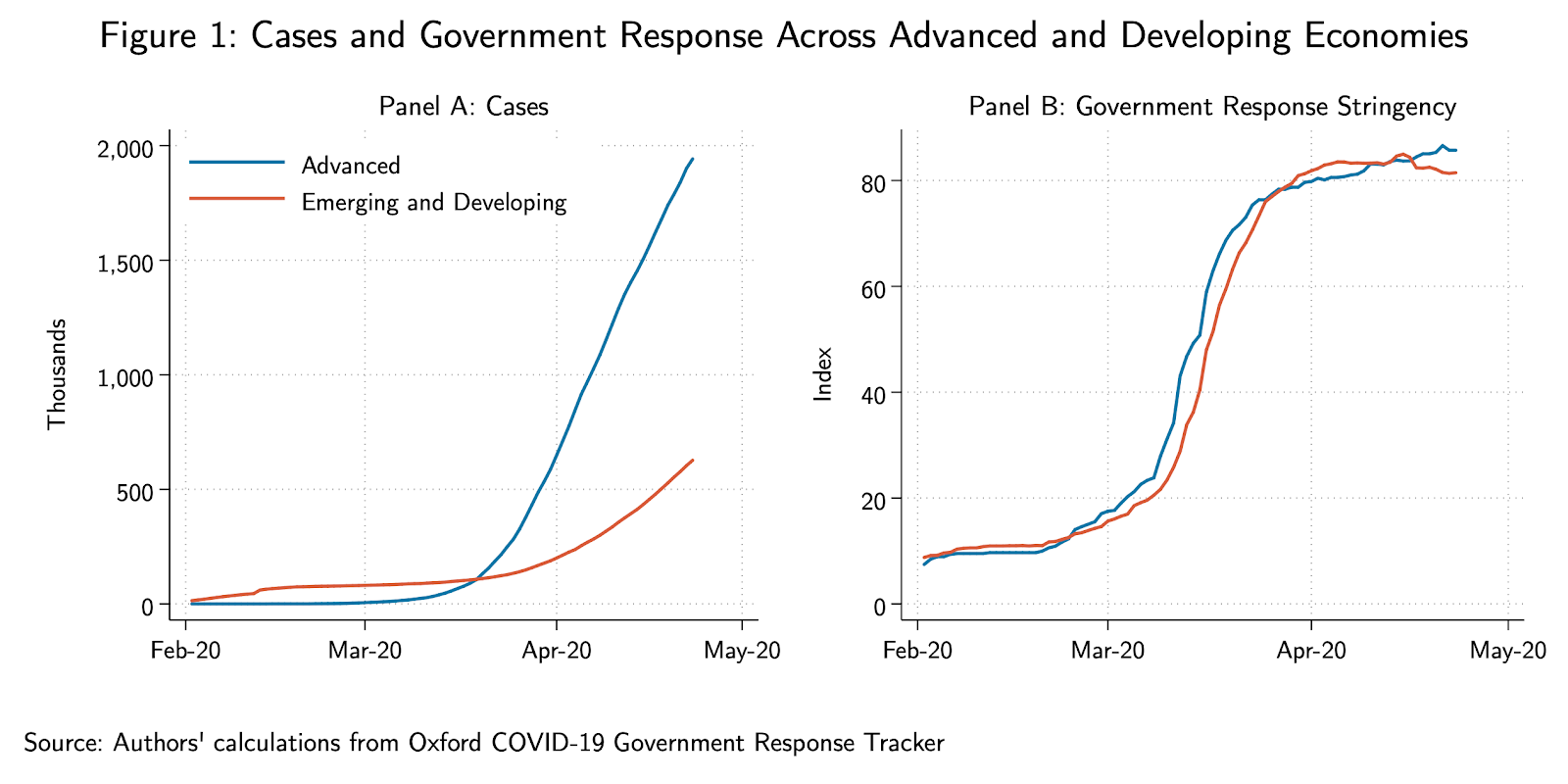 Emerging markets have unsurprisingly taken a financial shellacking. With risk off and hot money running for the exits, equities fell, credit spreads widened across the quality spectrum, and FX weakened. From peak to trough, equities have fallen by 20% and spreads for EM sovereign spreads have increased by more than 400 bps (Table 1). 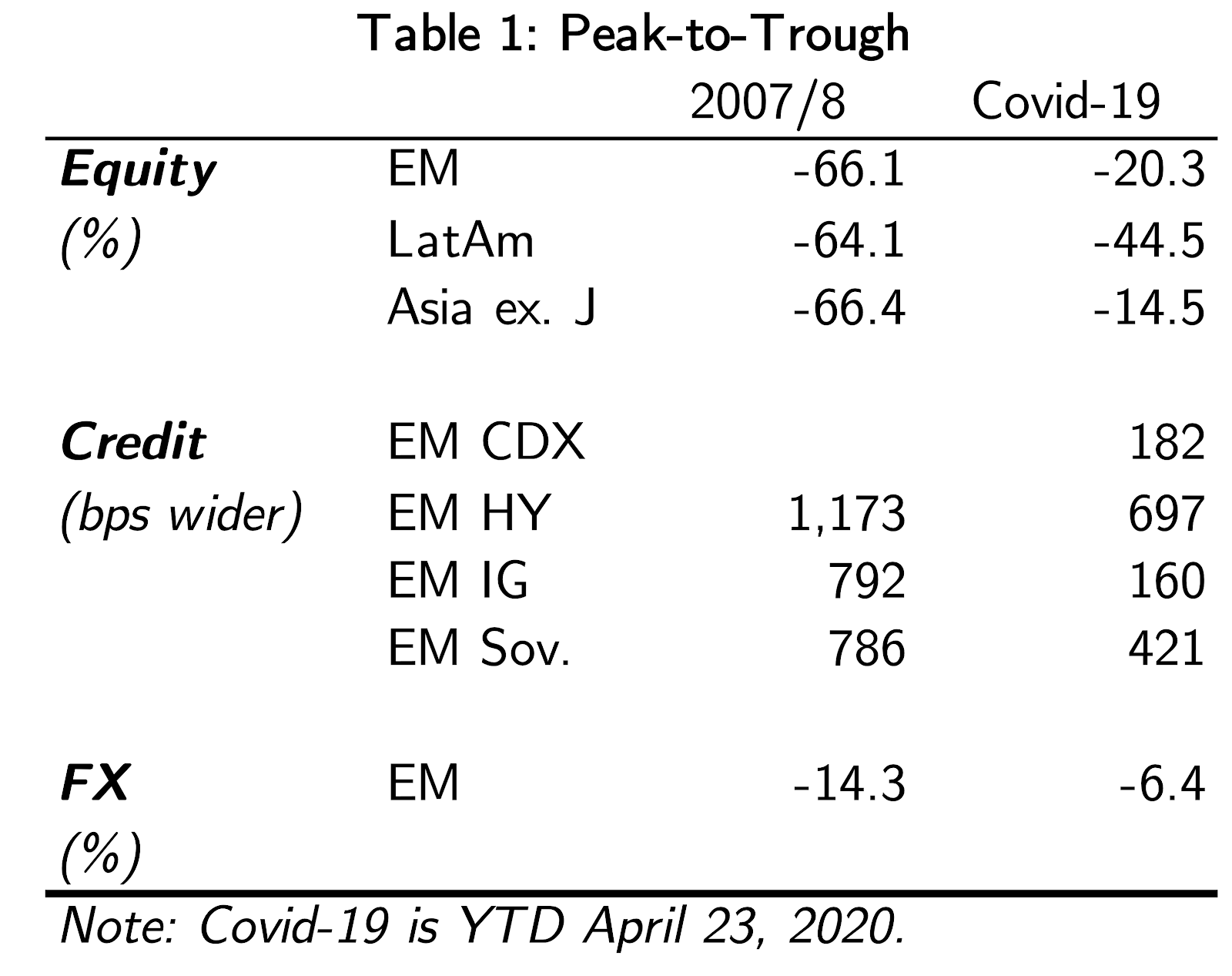 The EM CDX, an index of about 20 emerging market sovereign issuers’ CDS spreads, increased almost 300 bps (Figure 2). Compare that to the 10 bps increase in US CDS spreads, despite the US’s discretionary fiscal expansion of 7% of GDP compared to EMs’ of 3.5%, as estimated by Goldman Sachs. 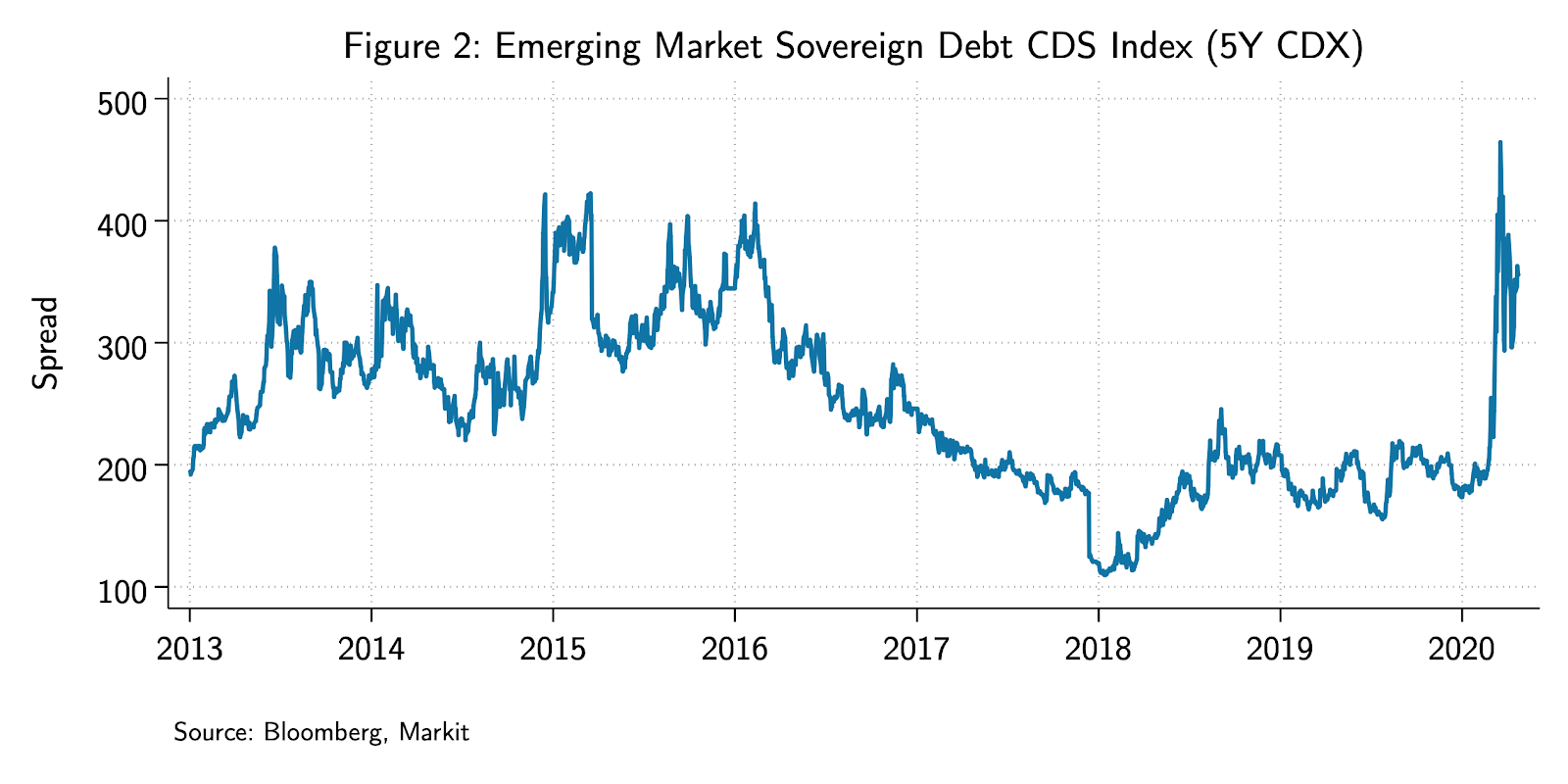 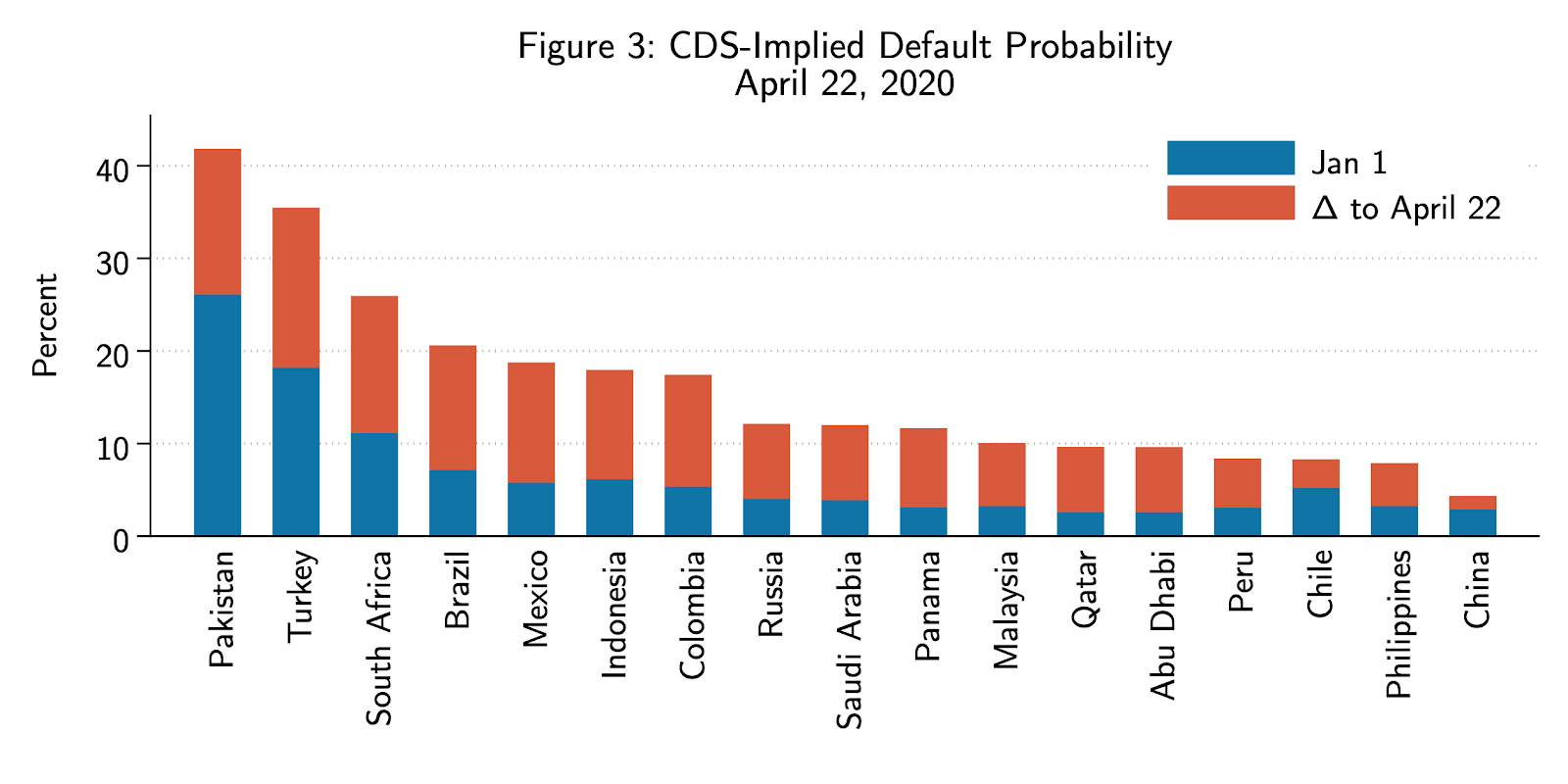 This spike in perceived risk can have dire consequences for public finances in individual countries. Since the financial crisis of 2008, investors from advanced economies have searched farther and farther afield for attractive yields. This Marco Polo-esque search for yield has cushioned the public finances for many emerging markets (Figure 4). On the flip side, international reserves for many emerging economies have increased noticeably; on average, reserves have tripled in the last two decades. As a by-product, exchange rates have stabilized despite a slow walk towards a floating or quasi-floating mechanism (Bianchi, Hatchondo, and Martinez, 2018). Now, the public-debt binge is over, and unceremoniously so. 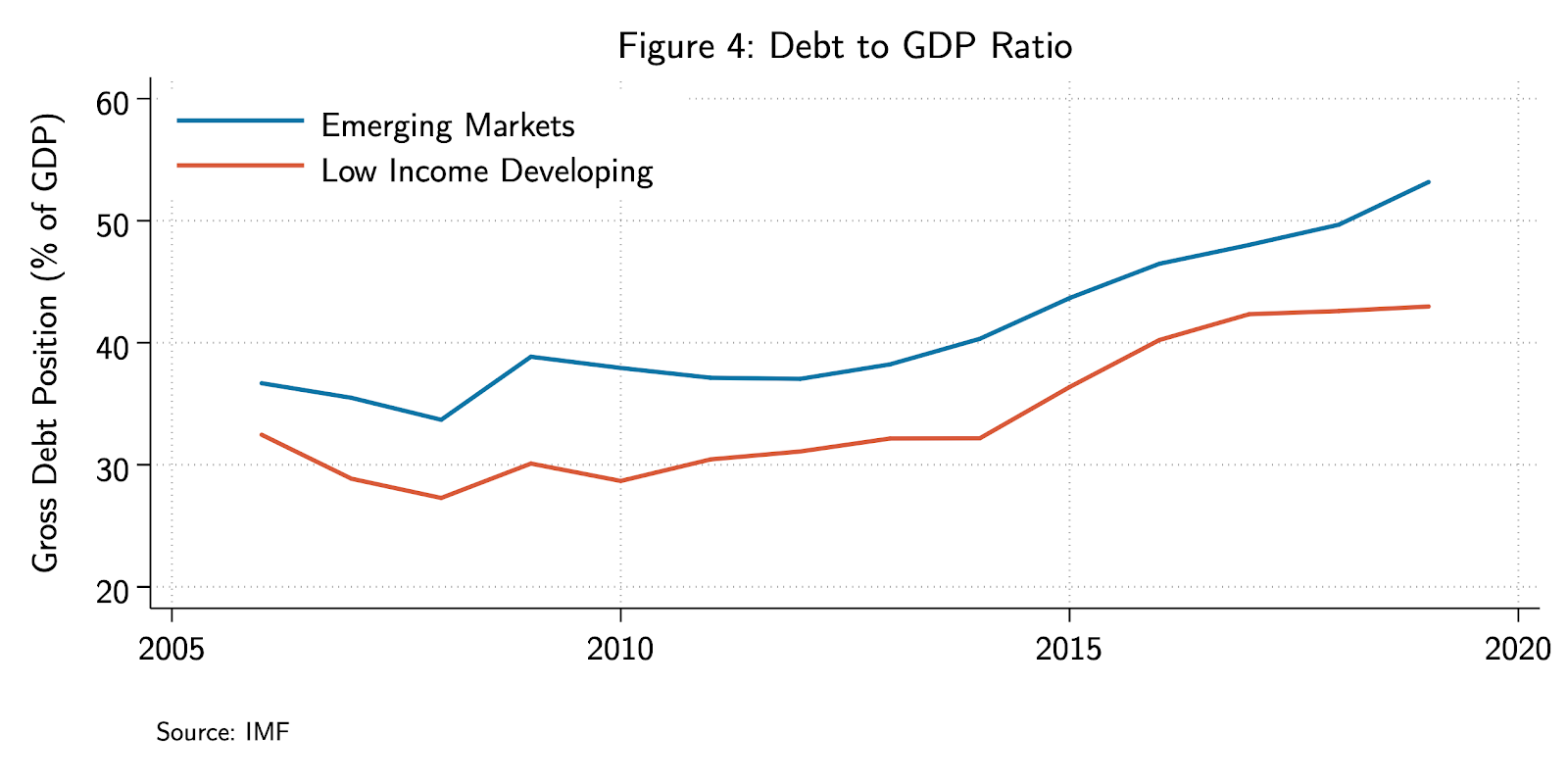 Central banks in emerging markets are in a peculiar position due to these headwinds. On the one hand, there is an incentive to increase interest rates to compensate for the increase in risk premia. However, the deflationary nature of the crisis and possible political economy factors call for a loosening of monetary policy. While EM central banks have heeded the latter with 113 rate cuts globally this year, the flight to safety is a potent threat to EM public finances, especially with government budgets due soon in many countries.

Another cause of concern for some emerging economies is the possibility that their citizens working in other countries have to return home. This scenario compounds the problem due to the financial shock as it may reduce remittances and increase domestic labor supply, a double whammy. Countries like Pakistan and India with patchy social safety nets would have to grapple with significant unemployment and wage pressure while another source of dollars—remittances—deals a blow to national accounts (Figure 5). 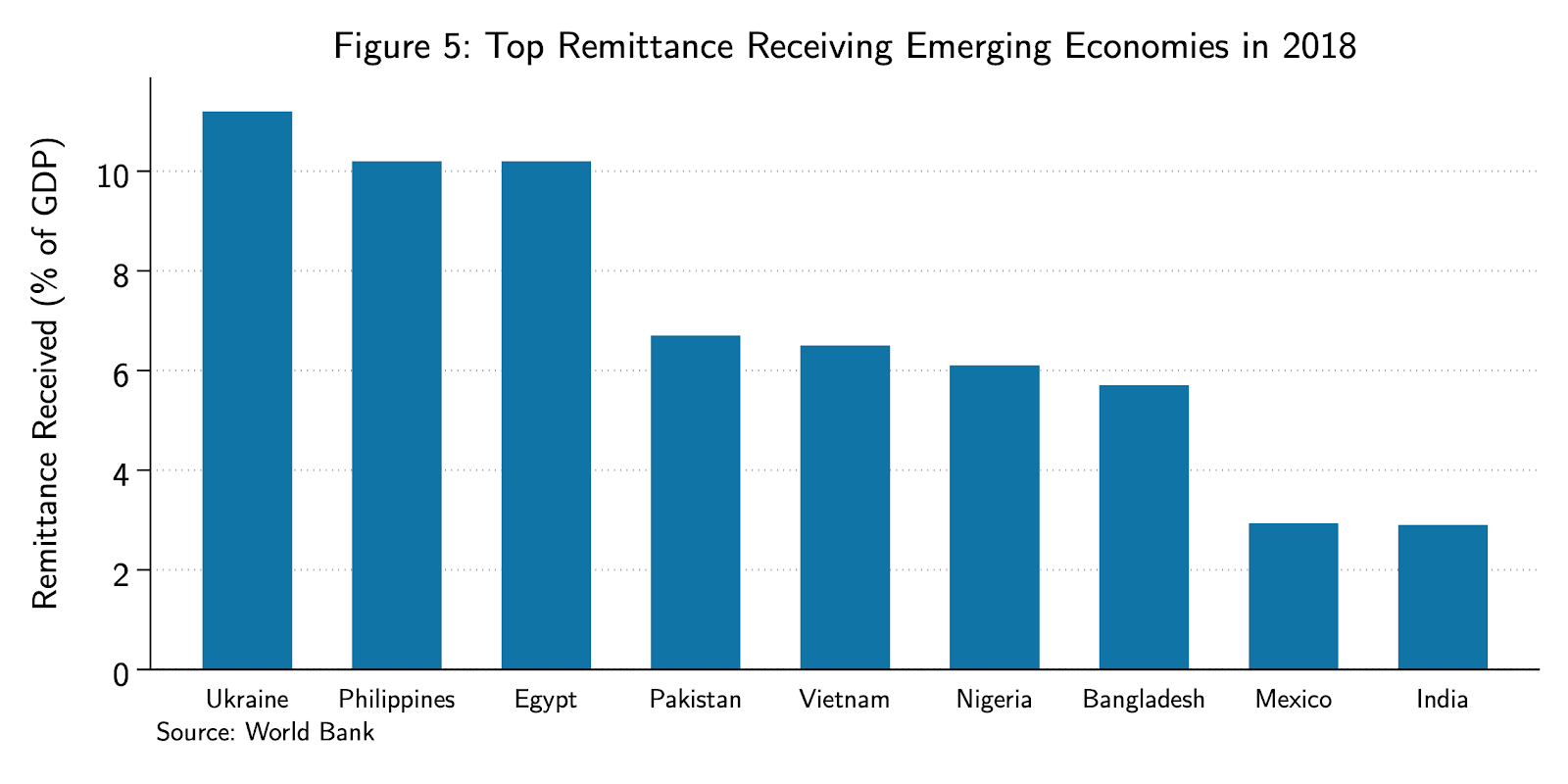 To complete the nightmarish prospect, a slump in global demand means economies reliant on commodities are in for a rude awakening. Although oil has grabbed worldwide attention prices for zinc, scrap steel, copper, and tin have declined precipitously since January 2020—dropping by 18%, 17%, 16%, and 13%, respectively. While mine closures in South Africa and the DRC have steadied prices for some metals, the net pressure on public coffers will be significant, feeding into investor concerns mirrored by the CDS spreads.

There is reason for hope yet. The exposure of emerging markets to a Covid-19 outbreak—very roughly proxied by Goldman Sachs’ economists using the countries’ age distributions, prevalence of smoking, access to sanitation and clean water—is no worse than that of advanced economies. Markets have yet to plumb the lows seen during the global financial crisis (Table 1). Although EM credit spreads have widened, especially for high yield corporates, sovereign and high-quality issuers are still trading well below 2008 peaks.

In recent days, the G20 announced a repayment freeze for bilateral loans through 2020. This development is significant, despite an initial outlay of only $20 billion, as it has set the trend for further easing the debt burden for the most vulnerable societies. However, bringing private creditors on board will be a thorny issue and may blunt the G20 efforts. Moreover, the IIF estimates the same countries receiving G20 assistance owe about $140 billion in external debt service payments in 2020, so the relief program is only a first step.

The spike in CDS spreads may prove to be a canary in the coalmine vis-à-vis possible credit events on sovereign debt. Such an event could prove to be regionally disastrous and may prolong the health crisis itself if a government has to direct resources towards litigation instead of public health.

In 2017, the World Bank set up the Pandemic Emergency Funding Facility wherein a bond would provide funding if a pandemic occurred in certain member countries deemed most vulnerable. After initial hiccups determining whether the criteria were met or not, the securities were adjudged as in the money. While the payoff is less than $200 million, it is only part of the institution’s response to the ongoing crisis. More importantly, this development highlights the importance of financial innovation: state-contingent assets can prove to be an invaluable lifeline for at-risk communities.

Recent decades have marked a comeback of official lending relative to private lending. A wide range of region-specific development banks, bilateral, and multilateral lending agreements are available and ready to act. Horn, Reinhart, and Trebesch (2020) argue today’s “global financial safety net is large and diverse.” We will find out soon enough.