Flight from Maturity during the Coronavirus Crisis

The coronavirus crisis has caused significant turmoil in funding markets in recent weeks. Although the Fed unveiled an alphabet soup of aggressive lending programs across many markets, a flight from maturity continues across many money markets, including interbank Eurodollar funding and commercial paper (CP).

Unlike a flight to quality—in which lenders entirely shift to the highest quality safe assets like Treasurys—a flight from maturity occurs when lenders preserve the option to exit quickly by lending at shorter maturities. Risk builds and funding structures grow precarious as lenders place a larger and larger premium on the exit option.

We build on the work of Gorton, Metrick, and Xie (2015) to show the flight from maturity during the coronavirus crisis. We measure maturity shortening using the steepness of money markets’ term structures. In normal times, the spread between 3-month and overnight rates are low and flat since the money market instruments are similarly nearly riskless. But in times of stress money markets’ term structures steepen, as was the case during the global financial crisis. The steepening reflects the diverse preferences of lenders and borrowers in a crisis. Lenders want to lend at a short maturity so they can quickly exit if borrowers approach insolvency, while borrowers—often banks—want to borrow long to lock in funding and are willing to pay higher term rates.

We look at publicly available high-frequency data on money markets: Libor and US CP. Both measures show flight from maturity at levels approaching the peaks last seen during the financial crisis.

CP spreads remained relatively low as the initial news of COVID-19 arrived in February and early March. Beginning March 16, however, spreads increased very quickly for all flavors of CP as concerns about cash liquidity for corporate borrowers grew. Coincident headlines highlighted large fund outflows from corporate bond funds, discounts of bond ETF to net asset value, and several businesses drawing down credit lines. From 2010 to 2019, the average spread of nonfinancial CP, financial CP, and asset-backed (ABCP) 3-month rates to target fed funds ranged from 8 to 22 basis points. The week of March 16 spreads increased to 185 bps (nonfinancial), 220 bps (financial), and 240 bps (ABCP),—exceeding the peak spreads in the financial crisis of 2008 for financial and nonfinancial CP (ABCP spreads peaked at 310 bps in the financial crisis). 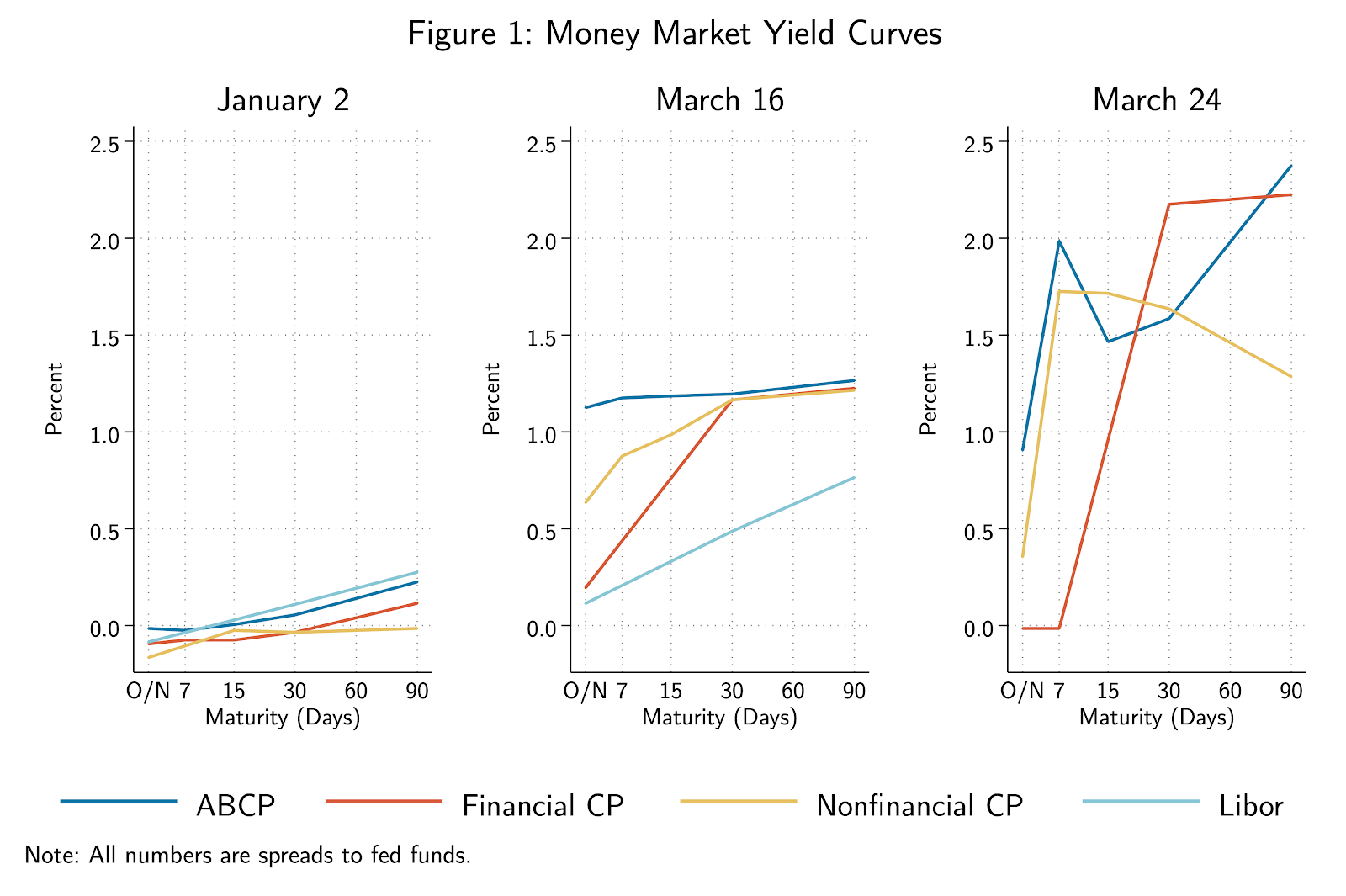 Figure 1 shows the term structure of CP  and Libor spreads, calculated as the money market rate less the fed funds target rate. We show this term structure at three points in time: at the start of the year during “normal times;” on March 16, following the Federal Reserve’s 100 bps rate cut on March 15; and on March 24, the latest day of available data for ABCP.

At the start of 2020, the term structure was fairly flat: overnight ABCP and Libor rates were close to the fed funds target rate, and the 90-day ABCP and 3-month Libor spreads at less than 50 bps above that. But the term structure for both money markets steepened during March. On Sunday, March 15, the Federal Reserve announced a set of macroprudential policies, including enhancing US dollar swap lines with other central banks and asset purchases of $500 billion in Treasuries and $200 billion in MBS. The Federal Reserve also decreased the interest rate target, and the March 16 spreads of ABCP and Libor increased to reflect this change.

These actions did not stop the flight from maturity, which accelerated the following week. On March 16, Libor’s spread steepened over the term structure, with 3-month Libor spread at nearly 80 bps and the overnight rate at 11 bps. As coronavirus cases increased and markets continued to remain volatile, the term structure of CP—across all types of issuers— steepened, too. By March 24, the 3m/overnight spread for ABCP was 150 bps. Financial CP had an even steeper curve of almost 240 bps. 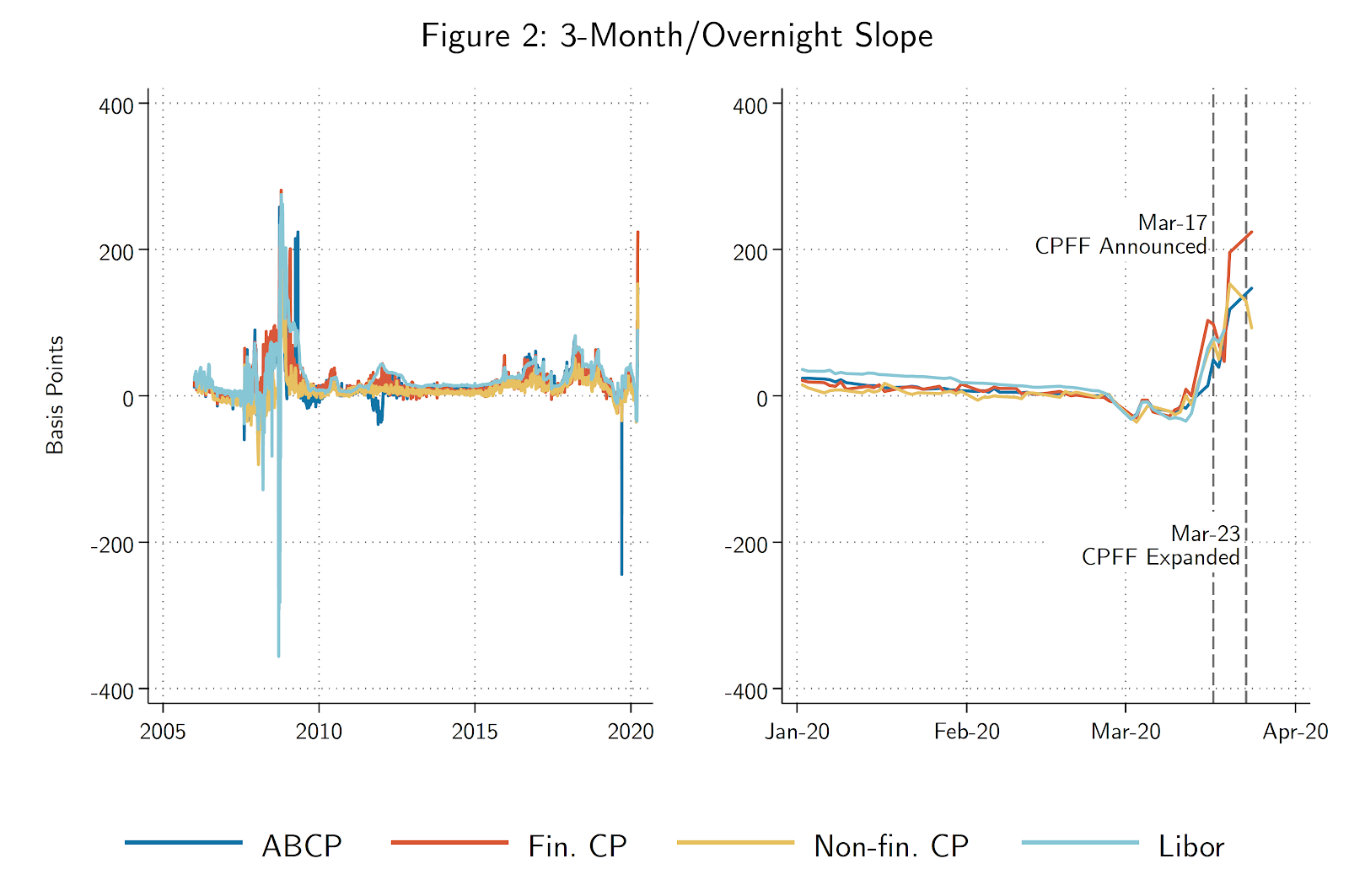 To get a sense of how the funding curves compared to the global financial crisis, Figure 2 shows the slope of the yield curve for CP and Libor by plotting the time series spread between the 3-month and overnight rates. The steepness of these curves is approaching levels last seen during the financial crisis (Table 1).

High-frequency CP issuance data makes the freeze in term CP markets clear: the shortest maturity CP, less than 4 days, doubled from $45 billion to $90 from March 11 to March 24 (Figure 3). At the same time, term issuance—defined as CP issuance with greater than 4 days maturity—fell. Issuance data obscures the composition of issuers as comparatively riskier issuers pre-coronavirus crisis have likely left the market. 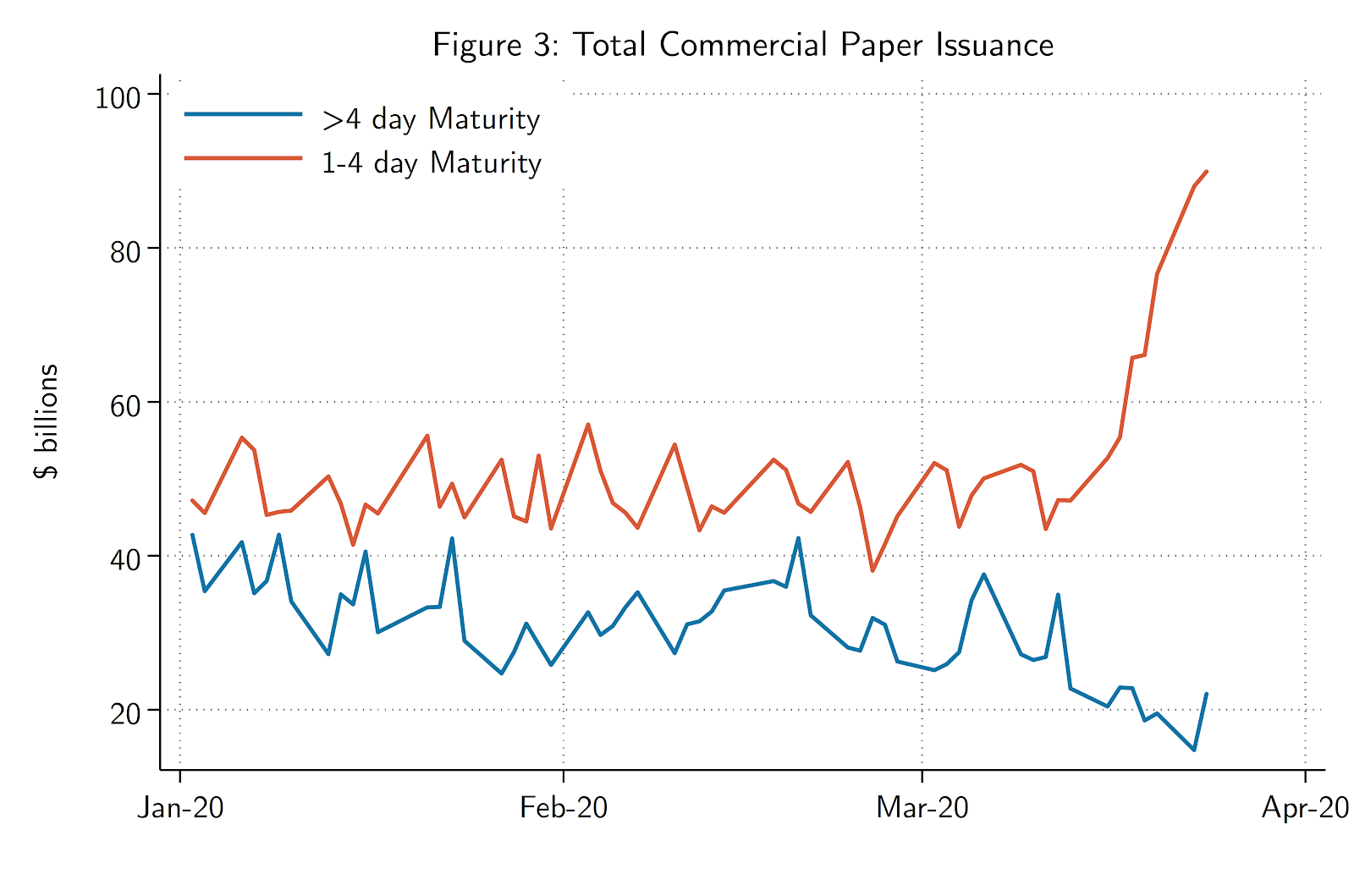 At first glance, it might be surprising the Federal Reserve’s CP funding facility (CPFF, announced March 17) had little impact on CP rates. This is partly because the CPFF focuses only on 3-month CP. Although the facility is very similar to the 2008-era program, the pricing is different relative to market conditions. In 2008, the spread was 3m OIS+100 bps plus a 100 bps credit surcharge, whereas the COVID19 facility is 3m OIS+200 bps. But there was minimal initial takeup during the current crisis because financial, nonfinancial, and asset-backed CP 3-months rates were well below OIS+200bps at announcement. Moreover, there is so little issuance of lower-rated A2/P2 the Fed has not stopped consistently reporting term rates, and the initial CPFF design excluded A2/P2 paper.

On March 23, the Fed expanded the CPFF: reducing pricing to OIS+110bps and expanding the facility to lower-rated A2/P2 CP issuers at OIS+200 bps. At the time of writing on March 25, financial and ABCP issuers will likely soon use the program as rates have continued increasing.

The progression of the term structure echoes a similar pattern to that of 2008 with maturity shortening as lenders aim to maintain the ability to make a quick exit. This is concerning given a flight from maturity creates a more fragile financial system. In the current coronavirus crisis, the trend may be particularly problematic: the yield curve for many money markets have steepened even after aggressive action by the Federal Reserve. Although the current crisis is a pandemic—not yet a financial crisis like 2008—short-term debt holders are ready to run, should something appear to threaten issuers’ ability to pay. Work remains for central banks to bend the funding curves down.