In this post we consider the risk profiles of the programs that the Fed has implemented during the COVID-19 crisis as compared to those it adopted during the global financial crisis of 2007-09 (GFC) and the role of the Treasury's backstop in each instance.

In earlier posts, we considered how the Treasury’s use of $454 billion authorized by the United States CARES Act to backstop Federal Reserve (Fed) programs might leverage the funds into trillions of liquidity for the economy. Thus far, this strategy has seen the Fed launch nine programs potentially offering up to $1.950 trillion of loans backed by $215 billion of  Treasury funds, or roughly 47% of the available amount. Consistent with the CARES ACT, these facilities were launched pursuant to Section 13(3) of the Federal Reserve Act, which requires, among other things, that the Fed be secured and that it seek to protect taxpayers.  As of  June 11, the Treasury has made investments into all SPVs for all programs except the TALF, and loans have been extended under the  Municipal Liquidity Facility, the Corporate Credit Facility, and the Commercial Paper Funding Facility.

The Fed also launched two other Section 13(3) facilities without Treasury backing, the Primary Dealer Credit Facility, which provides recourse loans to primary dealers, and the Paycheck Protection Program Lending Facility, which finances Paycheck Protection Program loans guaranteed by the Small Business Administration. Loans have been extended under both these programs.

Because of the wide impact of the government’s shutdown orders in response to the COVID pandemic, the programs that the Fed has implemented with Treasury support aim to distribute liquidity across wide swaths of the economy and reach borrowers to whom the Fed has not traditionally lent. These include corporations (Primary and Secondary Market Corporate Credit Facilities), political subdivisions (Municipal Liquidity Facility), and small and medium-sized businesses (Main Street Facilities). 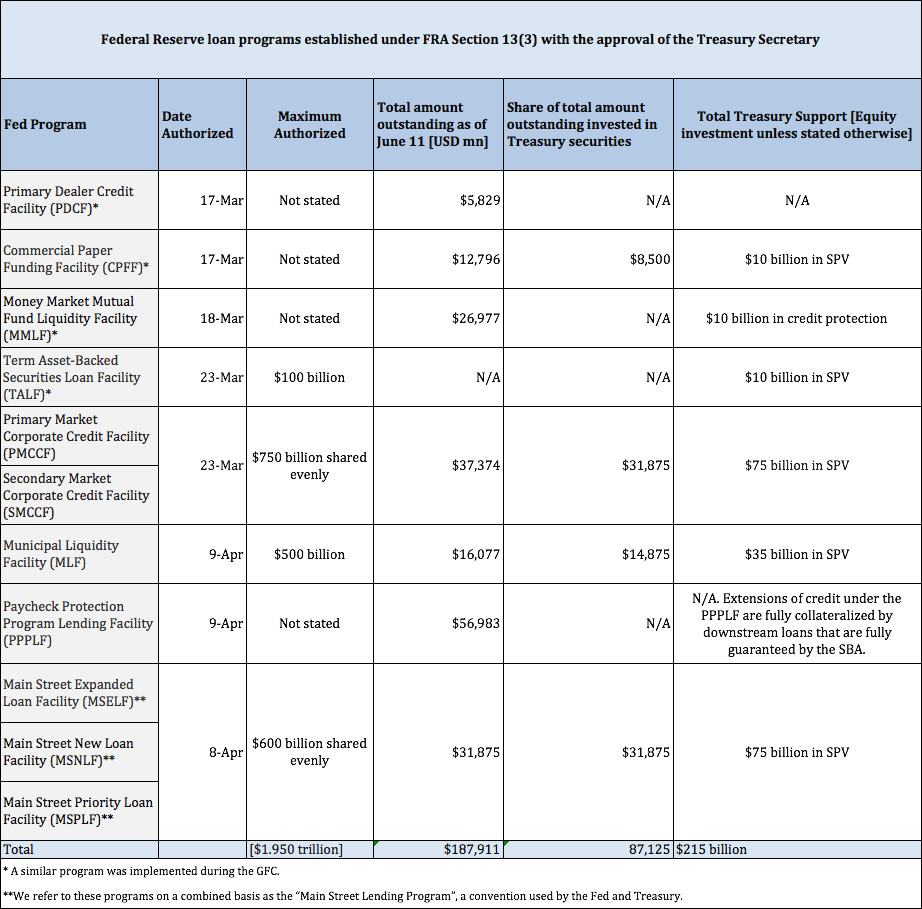 Some of the  programs are accepting riskier collateral than the Fed accepted under its GFC programs. The Fed’s GFC programs provided collateralized loans and required that such loans be “secured to the satisfaction of the lending  reserve bank,” i.e., that there be a high degree of likelihood that the Fed would be repaid and not experience losses, as required by the Fed’s then interpretation of Section 13(3).  See this YPFS blogpost for a discussion of Section 13(3).

The most significant question of risk that arose under Section 13(3) during the GFC was with respect to the Commercial Paper Funding Facility (CPFF), under which the Federal Reserve Bank of New York provided loans to a special purpose vehicle to purchase newly issued commercial paper from issuers. The loans were non-recourse to the participating issuers and secured by the commercial paper. To resolve any issues of adequacy of security, the Fed required issuers to pay an insurance fee as extra security for the loan. Scott Alvarez, former Board General Counsel and his legal team penned a memo concluding that such a mechanism was sufficient to meet the requirements of Section 13(3).

The Fed was repaid all amounts of loans under its GFC programs, earned interest and fees on its loans, and experienced a net profit with respect to its programs. (CBO Ltr p. 20).

By comparison, the COVID-19 Section 13(3) programs have more risk built into them, as they are accepting a wide range of assets as collateral, including accepting lower quality collateral than the Fed has accepted in the past.

Several Fed programs will accept as collateral, “fallen angels,” bonds that were initially given an investment-grade rating, but which have since lost their investment grade rating due, in part, to the economic slowdown brought on by COVID-19. The following programs show the range of collateral that is being accepted:

With the exception of the PDCF, the COVID-19 program loans are non-recourse to participants; in the event of default, the Fed would be able to take possession of the collateral to make itself whole. The Fed programs also seek to manage risk by varying the interest rates charged and the haircuts that are applied to different collateral. For example, under the 2020 TALF, there are three levels of interest rates.  There are also three levels of haircuts ranging from 5% for ABS backed by prime credit card debt of less than a year duration, to 22% for 6-year leveraged loans.

By comparison, the 2008 TALF initially accepted only newly issued, highly rated ABS backed by new or recently extended auto loans, credit card loans, student loans, and small business loans. The program was later expanded twice to accept a wider range of collateral, but securities were required to have triple-A ratings from two or more rating agencies and were subject to an additional risk assessment by the Federal Reserve. The collateral was also subject to a haircut that depended on its riskiness. The Fed considered accepting other types of  securities, such as residential mortgage-backed securities and collateralized loan obligations, but ultimately decided they would present an unacceptable risk. At its highest, the 2008 TALF was authorized to purchase up to $1 trillion of ABS and was backstopped by $100 billion of Treasury funds from the TARP. See this YPFS blogpost for a discussion of the two TALF programs.

A Treasury Backstop for COVID Facilities

When one reviews the testimonies by Treasury and Fed officials regarding the 2008 TALF, they seem to suggest that neither the Treasury nor the Fed expected that the Fed would need to resort to the backstop.  The recent CBO report noted that the Fed did not sustain losses on its GFC Section 13(3) program lending and that the interest and fees under such programs resulted in a profit to the Fed.

With respect to the COVID-19 lending, the CBO concluded that a broader range of lending was expected and that the Fed would likely take on greater risk under the new programs than it had during the GFC.  Despite these factors, it concluded that in aggregate, the result would be similar to that of the GFC programs in that  “income and costs will roughly offset each other [on average].”

However, the CBO also added important nuance to its analysis:

That additional lending will result in substantial additional credit risk for the government, however, which could have a wide range of budgetary effects. In CBO’s assessment, there is a high probability that the lending will result in a small net profit for the government, thus reducing the deficit, but there also is a small probability that the provisions could result in a very large loss—an outcome that would significantly increase the deficit. Finally, CBO expects that the performance of loans and assets will vary across facilities, with some realizing net losses and others net gains. (emphasis added.) (CBO Ltr 03/2020, p.20-21).

With the possibility of losses being discussed, the CBO also concluded that if losses were to occur, the Treasury's equity investments would be “available to cover loan defaults or other losses” (CBO Ltr 03/2020, p.20).

Former Secretary Timothy Geithner has earlier posited that it would be acceptable for a central bank to accept losses when fighting a crisis: “Of course the central bank should be prepared to take losses. In fact, it is highly likely given all the risk and uncertainty in panics that the appropriate use of the lender of last resort authority might well result in some losses.”

During the current crisis, statements by Chairman Powell and the Fed have expressed the position that the Treasury’s investments in the Section 13(3) programs were available to act as loss backstops. Messages from Secretary Mnuchin were not so clear until May 18, when during testimony to the Senate Banking Committee, he clarified that the Treasury was willing to absorb losses from the Section 13(3) programs. (See a YPFS blog discussing this point.)

Prior to Secretary Mnuchin’s testimony, some legal and media commentators[1] had coalesced around a similar interpretation. Professor Kathryn Judge of Columbia Law School wrote in a blogpost that, “Although not statutorily required, [the Treasury backstops] signal the Treasury’s willingness to share in the losses given the credit risk that these programs may entail.” (Blue Sky Blog Post). While not definitive, broad-based discussion regarding the possibility of losses may provide the Fed and Treasury some coverage against later scrutiny, at least with respect to those programs authorized by the CARES Act. In March, before the CARERS Act passed, Professor Judge urged Congress to endorse the Fed’s early actions: “An additional benefit of having Congress bless the Fed’s action and focus on ex post accountability is that it could stop any opportunistic denials of legal authority later in this crisis.” The CARES Act provisions do seem to provide some coverage by laying out guidelines.

The Treasury's willingness to absorb losses will ultimately be judged by what occurs.  As the key shareholder of the special purpose vehicles supporting many of the Fed’s programs, it has the ability to influence the Fed’s administration of programs to minimize credit risk. Any moves to tighten terms, however, may impact participants negatively and may create friction with the overall intent of the programs to shore up the economy. There have already been questions about whether some of the Feds requirements are too strict to achieve its broad goal. It has responded to such criticism with respect to the Municipal Liquidity Facility, for example, by expanding it twice, significantly expanding the number of eligible municipalities including some with less than 500,000 residents.

The COVID-19 programs are still very new and some of them have not yet become operational. There may  be additional changes to the terms and risk profiles of these programs as they are brought on board and possibly expanded if the economic effects of the shutdown persist even as the country starts to reopen. Ultimately, these questions will be answered by future developments, including usage and how the economy responds.

[1] See for example the law firm Skadden Arps  “A key purpose of Treasury's investment in certain of these programs is to mitigate credit risk to the Federal Reserve in order to satisfy these legal conditions. Treasury's equity investments in those programs protect the credit extended by the Federal Reserve by absorbing first losses. “), WNBC ( “The program is structured so the Treasury takes the first hit if there are any losses. Taking on those risks places it on top of the credit stack so that the Treasury, in essence, becomes the top shareholder of deals totaling $4 trillion.” ), and  NY Times (“Treasury Secretary Steven Mnuchin has a favorite talking point. . . Because the Fed expects most borrowers to pay back, it does not need one-for-one support. As a result, a mere $10 billion from the Treasury can prop up $100 billion in Fed lending. And voilà — the $454 billion Congress dedicated to Fed programs in the aid bill can be multiplied many times.”).