On June 2, the Federal Reserve Board announced plans to begin selling off Secondary Market Corporate Credit Facility (SMCCF) assets. The Fed established the SMCCF on March 23, 2020 under Section 13(3) of the Federal Reserve Act to provide emergency liquidity for outstanding corporate bonds. The SMCCF first became operational on May 12, 2020, initially purchasing exchange-traded funds (ETFs). It began purchasing eligible corporate bonds on June 16, 2020. Both the announcement of the facility on March 23 and the announcement that the program was operational on April 9 tightened spreads in the $10 trillion U.S. corporate bond market (Figure 1). 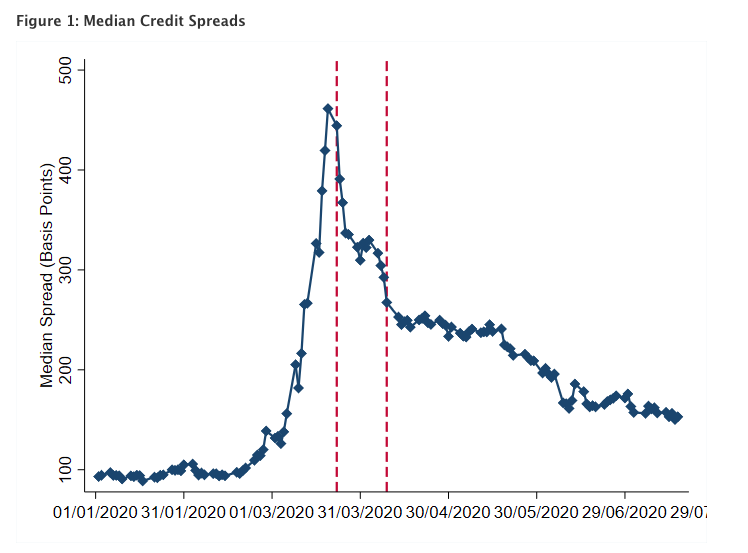 The total size of the SMCCF portfolio peaked at around $14 billion. The SMCCF was authorized to purchase up to $250 billion worth of ETFs and corporate bonds. The Federal Reserve Bank of New York (FRBNY), which operates the SMCCF, said it plans to sell the entirety of the SMCCF portfolio by the end of 2021. The SMCCF stopped purchasing ETFs in July, purchasing only individual corporate bonds until it closed altogether on December 31, 2020.

Further guidance from the FRBNY indicated that the SMCCF would begin gradually selling ETFs on June 7, “to minimize the potential for any adverse impact on market functioning by taking into account daily liquidity and trading conditions for ETFs.”

On July 8 the FRBNY announced that it would begin sales of corporate bonds on July 12.  The FRBNY also noted on June 3 that “the SMCCF expects to complete the sale of its holdings by the end of 2021.” At a pace of $2 billion per month (which would be consistent with completing sales by the end of 2021), portfolio sales would total just 4 percent of the moving average of net investment grade corporate bond supply since the start of 2021 (See Figure 2).

The June 2 announcement had little effect on credit markets, which have largely recovered from the initial panic at the beginning of the COVID-19 pandemic: high-grade bond yields are at 14-year lows and yields for junk bonds were near an all-time low in May. Minutes from the Fed’s June 15-16 meeting also reported that the Fed’s announcement of the imminent wind-down of the SMCCF “elicited little price response.” The lack of reaction in bond yields might indicate that markets believe the Fed will have a more permanent role to play in corporate debt—that the “Fed has your back” as Matt Brill, head of U.S. investment-grade credit at Invesco put it.

Perhaps because of the relatively small size of the SMCCF portfolio and calmness in the corporate bond markets, the Fed did not opt for a longer communication runway to its winddown of the portfolio. The Fed announced the winddown on June 2 and sales started on June 7. Moreover, the Fed had not previously communicated that it was considering selling these assets.

The last public communication by the Fed on its plan for these assets was approximately a year prior, on June 17, 2020, when Fed Chair Powell testified before the House Committee on Financial Services. In a line of questioning from Representative Wagner, Powell said (p. 13) of the SMCCF,

As the FRBNY noted in its FAQ on the sales, “ETF holdings, which account for over half of the SMCCF portfolio, do not have a fixed maturity date, which means that the ETF positions must be sold in order for exit to occur.” The Fed also held approximately $5 billion of individual corporate bonds as of May 31, 2021, with maturities into 2025. Only about $300 million of this debt was set to mature in the remainder of 2021. As per the winddown details, however, the Fed plans to offload the entire SMCCF portfolio by the end of 2021.

As the FRBNY also noted, “As an emergency facility authorized under section 13(3) of the Federal Reserve Act, the SMCCF's operations were intended to be temporary actions to support the flow of credit to the economy. With the facility closed as of December 31, 2020, and the corporate credit markets continuing to function well, it is appropriate to begin the process of winding down the SMCCF portfolio.” The muted market response to the Fed’s announcement of the unwind seems to have validated that a longer holding period or earlier communication of the planned sales was not necessary. Yet, it is perhaps also notable that at the time of the announcement and the beginning of the sales, 13(3) was still actively invoked. On March 8, 2021, the Fed announced an extension of the Paycheck Protection Plan Lending Facility (PPPLF), authorized under Section 13(3), until June 30. (On June 25, the Fed extended the PPPLF an additional month.)

The Fed has not indicated it will sell assets from its other 13(3) programs—its $13.5 billion of Main Street loans, $4.4 billion of municipal securities, and $1.6 billion of asset-backed securities—nor did the Fed engage in active sales to unwind any of its broad-based facilities set up in the Global Financial Crisis (GFC). The SMCCF differs from other 13(3) facilities used during COVID-19 and the GFC in that it is the only 13(3) facility in which the Fed itself directly intervened in a secondary market. Other interventions in a secondary market, such as the Term Asset-Backed Securities Loan Facility, provide loans to intermediaries to support their purchasing of securities in secondary markets. The relative salability of the SMCCF assets (corporate bonds and ETFs) may explain why the Fed chose to actively sell the SMCCF portfolio in short order, and may inform the nature and duration of any future interventions in which the Fed intervenes directly in secondary markets (as many encouraged the Fed to do in the municipal bond markets in 2020; see, e.g., p. 45, p.36).