Recent weeks have been a rollercoaster for mortgage real estate investment trusts (mREITs). Problems in funding markets led to quickly falling stock prices for mREITs through March, although they have stabilized in April. In this note, we discuss the business model of the roughly $700 billion mREIT industry, how that model has come under pressure during the COVID-19 crisis, and the differential effect of the Fed’s actions across the industry. 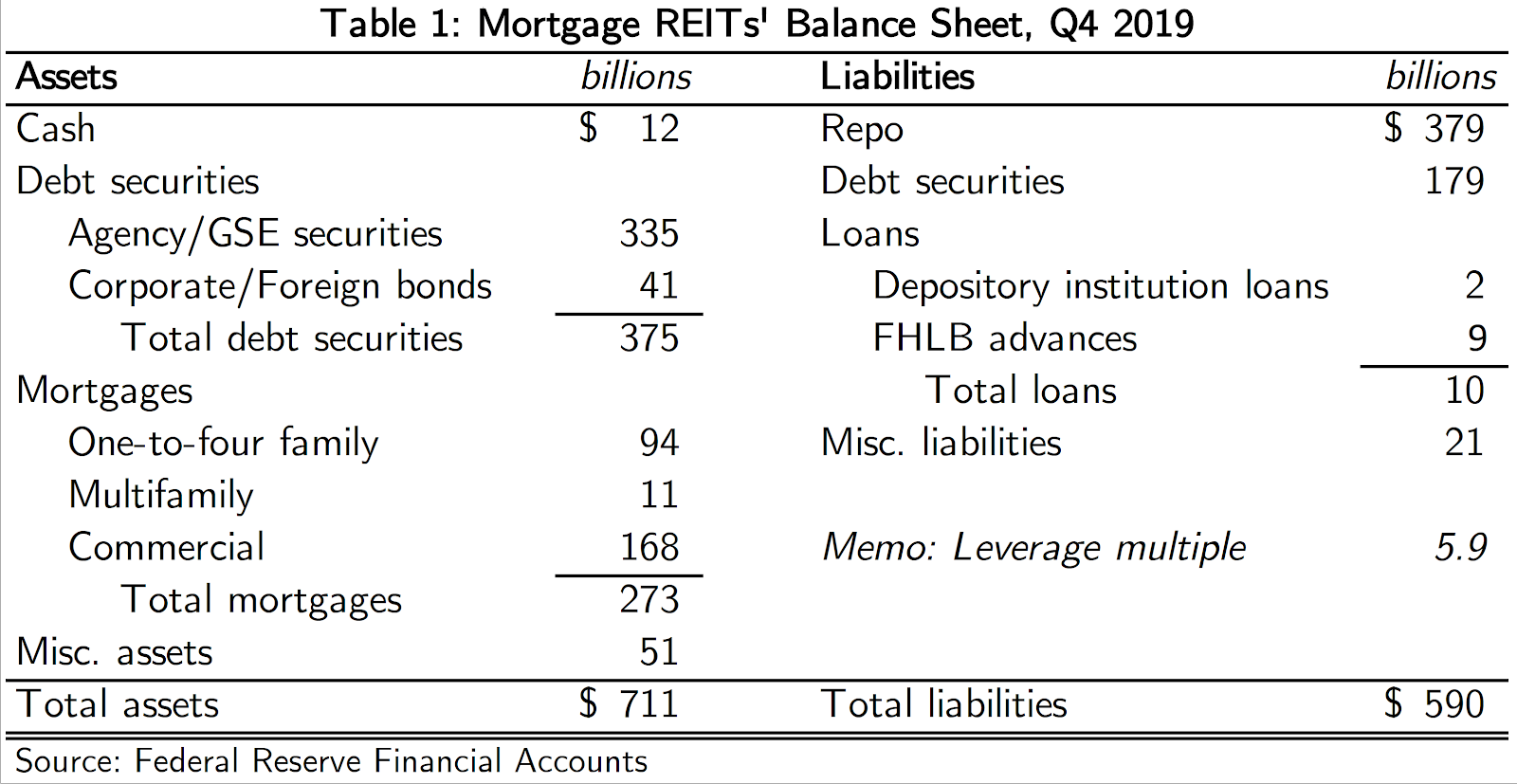 In normal times, it is easy to finance agency MBS and similar assets via collateralized financing transactions, like repurchase agreements. In a repurchase agreement, a borrower pledges collateral (e.g., MBS) and receives cash in exchange; at some point in the future, the borrower repurchases the collateral from the lender at a price which reflects the interest rate of the loan.

Because of the depth and liquidity of mortgage security funding markets, the mREIT business model relies on considerable short-term funding to provide leverage for its investments. Across the 37 publicly traded mREITs in the Bloomberg mREIT index (BBREMETG Index), the index had a simple leverage multiple of 7.4 in 2019, corresponding to a 13.5% capital ratio. There is considerable variation across the firms, with the leverage multiples ranging from 1.7 of 10.6.

Amid the liquidity crunch and resulting dash for cash in mid-March, the mREIT equity price index fell more than 60% (Figure 1, Panel A) as spreads across many types of structured credit widened to levels last seen in the global financial crisis. Agency MBS spreads increased from 40 bps to 132 bps at peak, and ABS and CLOs followed similar trends (Panel B).

Mark-to-market prices for MBS are closely related to liquidity conditions. An easy way to see the deterioration in agency MBS liquidity is in the discount to net asset value of a large agency MBS ETF which fell past a 3% discount in March (Panel C). The cost of financing agency CMOs relative to OIS—essentially the market’s expectation of the average overnight Federal Funds rate over the life of the swap—grew from 10 bps to nearly 80 bps in mid-March (Panel D), lowering the carry to a long MBS position financed via repo.

A few different forces drove the loss of liquidity. First, the dash for cash among large cash pools meant there was less cash available to broker/dealers, which in turn meant broker/dealers had fewer dollars to pass on to leveraged investors like mREITs through so-called matched book repo funding.

Second, a number of proposals targeted at reducing the financial fallout of the COVID-19 crisis for homeowners introduce heightened prepayment risk for mortgage investors. These policies include short-term measures like HUD’s 60-day moratorium on evictions and foreclosures and longer-term measures like principle forbearance or principal reduction. Prepayment can occur when a homeowner refinances or when the mortgage loan is bought out of the MBS pool due to nonperformance, by either an agency or the servicer (depending on the issuing agency). Increased prepayment risk, all else equal, will increase MBS spreads.

Third, levered investors were forced to sell their positions, raising concerns about fire-selling. With funding conditions strained, mREITs faced margin calls, and, in at least one case, a mREIT’s bank counterparty seized its collateral and sought bids. Other mREITs suspended dividends and delevered. Those unable to meet their margin calls asked their lenders to consider forbearance.

On March 23, the Federal Reserve announced the FOMC would purchase agency MBS “in the amounts needed to support smooth market functioning and effective transmission of monetary policy to broader financial conditions and the economy.” The Fed’s action tightened agency MBS spreads to nearly pre-crisis levels, although other forms of structured credit only tightened somewhat.

We find that the Fed’s actions helped stabilize the agency mREIT industry, while largely not supporting non-agency mREITs. We look at the top ten largest components of the Bloomberg Real Estate Investment Trust Mortgage Index and calculate the cumulative abnormal return for each mortgage REIT relative to the overall S&P 500 return with market betas estimated from January 1, 2010, to December 31, 2019. We classify these 10 largest mortgage REITs into agency or non-agency groups based on their balance sheet details and value-weight the agency and non-agency CAR using the market capitalization of each mREIT.

In the early stages of the crisis, following the World Health Organization's pandemic declaration on March 11, agency mREITs fell more than non-agency mREITs. On March 15, the Federal Reserve signaled support for MBS with an asset purchase announcement of up to $200 billion in mortgage-backed securities. In the next three days, non-agency mREITs had a -40% cumulative abnormal return relative to the market-predicted return, while agency mREITs faced a smaller decline of -17%. Finally, following the Federal Reserve’s March 23 asset purchase announcement of $200 billion in MBS, including agency commercial mortgage-backed securities, agency mortgage REIT markets rebounded with agency mREITS seeing a 15% CAR, while non-agency mREIT returns dropped 4.7%.

For now, the largest mREITs appear to have stabilized, although at materially lower valuations. Funds that had announced dividend suspensions in March reversed their decision in the first weeks of April. The Fed’s actions helped the agency MBS market considerably; however, adjacent markets like highly-rated non-agency MBS, agency credit risk transfers, CLOs, and highly-rated ABS continue to trade at wide spreads. Data available as of April 17 shows that the percent of conduit CMBS loans current on their payments dropped ten percentage points, from 95% to 85%, from March to April—by far the largest increase in late payments back to 2008. Agency mREITs may be coming out of the woods, but it’s tough to say the same for non-agency mREITs.