Many states are facing barriers to access the Federal Reserve’s $500 billion Municipal Liquidity Facility (MLF) due to constraints on general debt issuance in their constitutions.

Congress authorized the MLF in the CARES Act. The program authorizes the Fed to purchase up to $500 billion in debt issued by states and counties and cities of a certain size and is intended to help mitigate the economic impacts of the COVID-19 pandemic. The program represents a new area for the Fed, which has not traditionally lent to government subdivisions The CARES Act separately also provided for $150 billion in grants to states to offset direct costs of the COVID-19 pandemic.

As originally implemented, the MLF provided limited opportunities for participation by cities and counties, instead allowing states to procure funding and distribute it amongst political subdivisions in their geographic area. However, as governors vocalized the extensive barriers to access, the Federal Reserve expanded eligibility from 10 cities and 16 counties to 87 cities and 140 counties. The Fed also extended the program’s end from September to December in response to states’ concerns.

Despite the changes, legal and practical hurdles still might limit utilization of the Fed’s program, which Congress intended to be a key tool to help states and municipalities manage the impacts of the virus. Many of these legal hurdles are written into constitutions to maintain fiscal responsibility in state spending. Moreover, some states can’t issue debt without voter approval, posing the challenge of conducting a ballot under extensive social distancing guidelines.

Many states have constitutionally-mandated caps on the amount of debt a government can issue within a fiscal year. These caps can vary dramatically.

Oregon, for example, only allows the issuance of $50,000 of aggregate debt, a sum small enough to render debt issuances unviable. Other states have much higher caps. For instance, South Carolina can issue debt up to 5% of its revenues from the previous fiscal year--an estimated $660 million for the state based on 2019 collections. Ohio utilizes a similar metric, requiring that debt obligations not exceed 5% of its general revenue fund plus net proceeds from lottery sales, making approximately $769 million its borrowing cap, based on 2019 revenues. Some states, such as Nevada, set caps based on the total assessed value of property in the state.

South Carolina, as mentioned earlier, may issue a sizable amount of debt, but the issuance must be preapproved by either two-thirds of the electorate or the legislature. Rhode Island may exceed its debt cap of $50,000 only if approved through a referendum. Texas requires the approval of a majority of voters, in addition to approval from the legislature.

Extensive social distancing guidelines have complicated voting procedures, leading many states to delay or cancel their primary elections to prevent the spread of the virus. Without opportunities to vote, some states cannot legally issue debt.

Social distancing guidelines have affected the daily operations of many state legislatures, temporarily suspending many sessions without means to operate remotely. Combined with the inability to conduct referendums, current health and safety requirements create barriers to states obtaining the necessary approvals for debt issuance.

Practical difficulty in meeting requirements for legislative or voter approvals may prevent some states from participating in the MLF. Some counties and cities are eligible to participate in the MLF directly, although the scope of eligibility, even under the expanded criteria, has been contested. The cities and counties eligible--even with the latest expansion in eligibility--are largely urban centers; many cities and municipalities in rural or suburban settings must therefore rely on state aid to receive funding for their local coronavirus response mechanisms, as seen in the chart below. 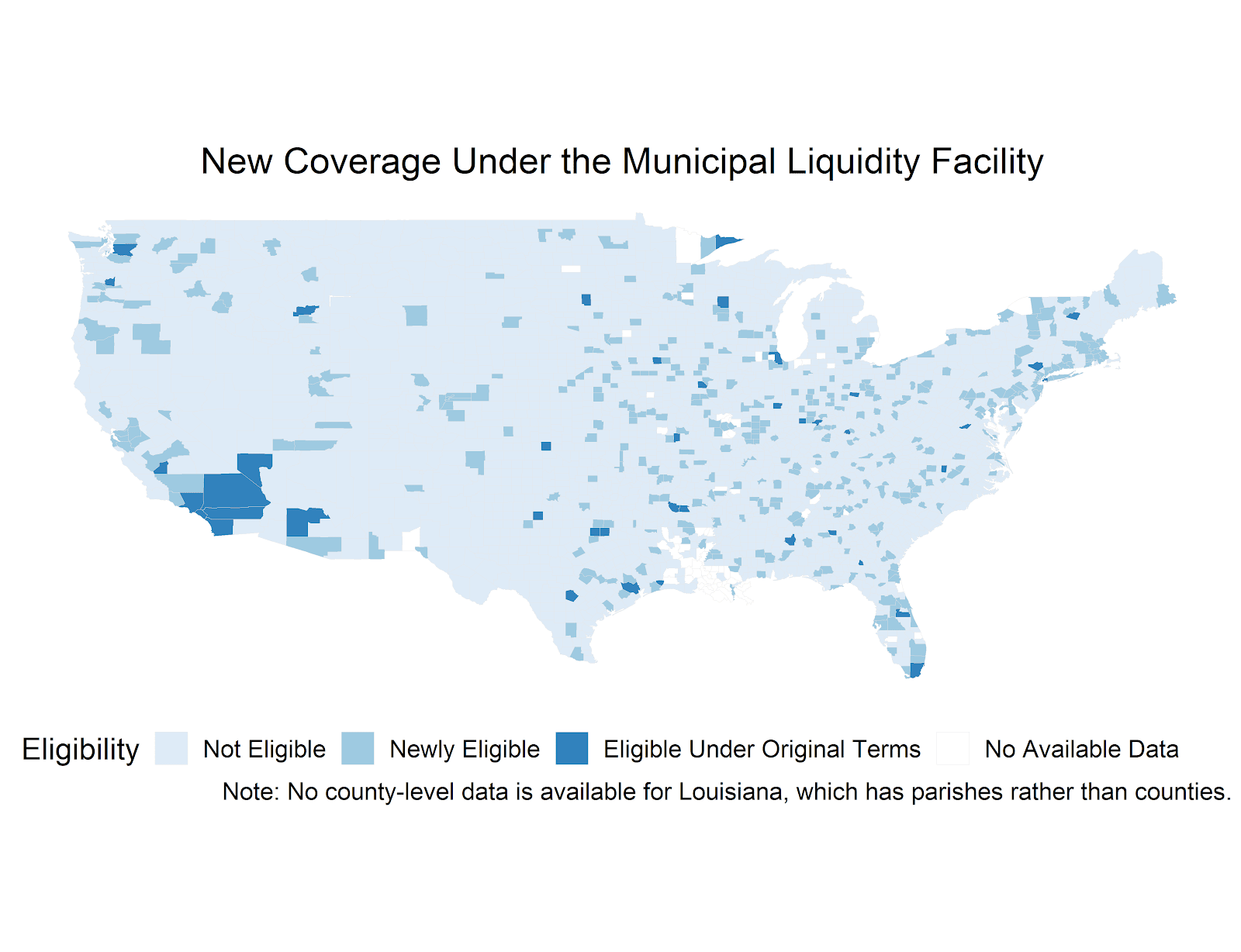 Eligible counties and cities may also face similar logistical barriers preventing debt issuances on a local level. City councils or governments must adhere to strict social distancing guidelines and are unable to hold referendums in their jurisdictions while maintaining public safety.

While some Federal Reserve officials acknowledged the limitations of the facility prior to the expansion, they have made no indication of additional expansions to the facility. As the first facility the Fed has created in this crisis to provide liquidity to municipalities, the MLF may expand or change as the COVID-19 crisis continues.

Smaller cities and counties ineligible for direct access to the MLF must rely on allocations from state governments for MLF aid. However, as noted above, several states face legislative and logistical barriers that impede access to the MLF. Presently, it’s unclear how smaller counties and cities within those states’ jurisdictions could receive aid if liquidity help cannot reach the states allocating funds. Congressional proposals for using federal government funds for municipal coronavirus expenses have received bipartisan support.

With direct state applications hampered through multiple barriers to debt issuances, it is unclear whether states will be able to fully participate in the program to cover the additional scores of counties and cities ineligible for the MLF. To issue debt, many states must  pass legislation or receive approval by a supermajority of voters, both logistically challenging while adhering to social distancing guidelines. Other states, though able to issue debt, have low debt issuance caps, preventing them from issuing debt to the extent needed to address municipal funding needs.

It is also unclear whether the original $500 billion allocated will be enough to fund all the financial needs of states and municipalities as many states report large estimated deficits due to COVID-induced budgetary shortfalls. Inflexible barriers to access may exacerbate this issue, allocating aid to states that can more easily issue debt.

As social distancing guidelines relax, it is possible that state legislatures may be able to return to sessions and pass debt issuances. With the facility extending into December 2020, there are still opportunities to provide coverage to municipalities that need aid in fighting the COVID-19 pandemic.