The legal and financial experts crowded into a classroom at Yale Law School on September 20 had come to discuss one thing—how to prevent another global banking crisis. Speaking on a panel at the conference, Andrew Metrick, the Michael H. Jordan Professor of Finance and Management at the Yale School of Management, stressed this point: the old models of keeping banks safe no longer apply.

“Our system no longer just has a handful of banks we regulate and keep safe,” said Metrick, who is also director of the newly created Yale Program on Financial Stability. “We have a very deep, parallel worldwide banking system now. The crisis that we just had started and accelerated in this parallel banking system.” Revamping the regulations that safeguard the financial system is going to require a comprehensive approach that takes into account the global nature of banking and the diverse financial instruments in today’s marketplace, Metrick explained.

Metrick, who also serves as Yale SOM’s deputy dean, was one of five panelists who discussed bank capital and liquidity requirements at the Sullivan & Cromwell Conference on Challenges in Global Financial Services, an annual event sponsored by the Yale Law School Center for the Study of Corporate Law.

Gary Gorton, the Frederick Frank Class of 1954 Professor of Management and Finance at Yale SOM, joined Metrick at the conference, serving on a panel that discussed bank transparency and the financial crisis. The conference, which drew professionals and academics from across the banking and regulatory communities, featured a keynote address by Daniel K. Tarullo, a member of the Board of Governors of the Federal Reserve System.

On Metrick’s panel, speakers debated the merits of capital requirements versus liquidity requirements, as well as the role of other regulatory measures, to promote financial stability. Metrick said that the topic is far from settled. “We clearly don’t have an intellectual consensus now,” he said. “Gary Gorton and I have worked a lot on this. We continue yelling out into the wilderness.” 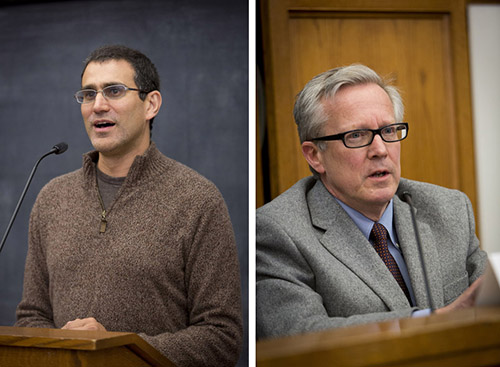 Gorton and his fellow panelists discussed whether banking practices should be more transparent both to the public and to regulators. While discussing the need for greater regulatory insight into the risks banks pose to the financial system, they cited the tension between transparency and the confidentiality and independence that banks require to conduct business. Gorton pointed out that this is a tricky problem, because banks need a certain degree of privacy to fulfill their core functions. “They need to be opaque," he said. "You make them too transparent, and you’re going to push banking into the shadows.”

Arriving at a solution, Gorton said, will be a long-term process that takes into account all aspects of the global financial system. There is no quick fix, he said, and only another crisis can test the effectiveness of any system in place. “Banking has always been opaque and it’s a double-edged sword,” Gorton said. “So the issue is how do we make the system less vulnerable to crisis.”