In recent weeks, mathematical models created by Prof. Edward Kaplan have helped to inform decision making about the response to pandemic at Yale and across Connecticut.

A global pandemic is also a local crisis. City and state governments, companies and organizations, and even individual households all have to make decisions about how to respond. Those decisions are complex and made under intense time pressure—and they can have vast consequences.

In recent weeks, Edward Kaplan, the William N. and Marie A. Beach Professor of Operations Research at Yale SOM (Kaplan is also a professor of public health and engineering), has developed what he calls “scratch models”—mathematical models developed quickly as events unfold with the goal of providing rigor and context to decision makers—to inform decisions at Yale University, Yale-New Haven Hospital, and the State of Connecticut.

“Within the United States there is substantial variation in the extent and timing of the epidemic across states, cities and towns, and there is a need to help support decisions at the local level as institutions and local governments struggle to respond,” writes Kaplan in a new paper outlining this work, which is forthcoming in the journal Manufacturing & Service Operations Management.

Much of Kaplan’s work has built on an initial model he created from some of the first data to come out of Wuhan, China. As more information became available, he expanded that model to help understand the spread of the disease absent any intervention—86% of people would eventually become infected, his analysis showed—and the effect various measures, such as social distancing or the detection and isolation of infected persons, could have to reduce or slow that transmission. 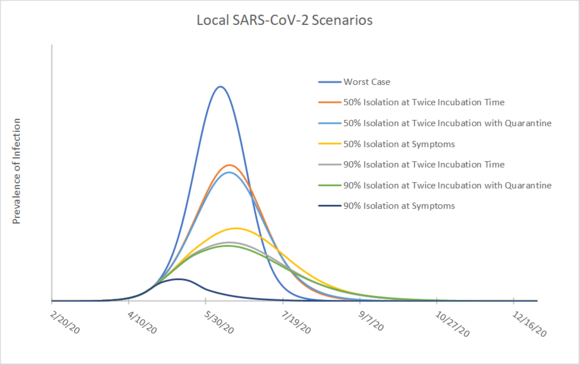 The first case of community transmitted infection in New York State was documented on March 3, 2020. The virus had already ravaged Wuhan, China, and was at that point responsible for 92,000 confirmed cases worldwide. A Yale University committee chaired by Paul Genecin, the director of Yale Health, and including Kaplan met to form recommendations about how the university should respond to the emerging crisis.

One of the first questions that Kaplan took up was whether to limit the number of people gathering for events at Yale and, if so, what would constitute a safe size. In hindsight, the question seems almost quaint, since the spread of the disease eventually forced much broader restrictions on activities. “This was actually quite important at the time,” says Kaplan, “because there were some large sporting events that were coming up, things like hockey games and basketball games, and large classes that had hundreds of people.”

As Kaplan explains in his paper, the committee framed the question as follows: “The quickly agreed-to goal of restricting attendance was that no new transmissions of infection should occur as a result of an event.” Kaplan explains that there are two ways to meet this goal: ensure no infected people arrive at an event or ensure that no transmission can occur at the event. Kaplan focused on the first and, given the uncertainty about the prevalence of infection in the community, in Connecticut, or in possible event attendees from other locales, built his analysis around defending against any given prevalence of infection rather than trying to estimate the actual level. So if the virus was still very, very rare, you could have a larger number of people at an event while remaining 99% confident none of them would have COVID-19. As the virus spread and became more common, the number of people you could have at an event would fall. This model led to an initial recommendation of restricting events to 100 people, and to further adjustments as it became clear that COVID-19 was becoming more widespread.

Events superseded the model when, on March 16, the federal government asked Americans to avoid gatherings of more than 10 people, and Yale adopted that number. But this sort of change to the environment is part and parcel of Kaplan’s approach to scratch modeling. He says, “Scratch modeling means literally starting from scratch, which also means not doing the kind of thing where you’d spend three months trying to get every detail exactly right. In that kind of research, obviously, by the time you figure anything out it would be way too late.”

Kaplan also commends the work of the committee, which has tackled a wide range of issues over the last few months. “There are a lot of people who were really working very hard to guide Yale through this whole thing,” he says. “The committee I think has been just unbelievable.”

Paul Genecin, the head of Yale Health and chair of the university committee, said that Kaplan’s scratch modeling has proved extraordinarily valuable. “It has helped us to understand where we are in the pandemic and to see the potential benefits of actions to mitigate the severity of illness in the Yale community, the City of New Haven, at Yale-New Haven Hospital and in Connecticut. In addition, Ed has helped us interpret the conflicting reports and appreciate the strengths and weaknesses of the  many published models and projections in the COVID-19 pandemic.”

Kaplan also worked with Yale-New Haven Hospital to “stress test” the hospital’s ICU capacity. Reports from the hard-hit Lombardy region of Italy demonstrated that the disease could overwhelm a modern, high-quality health system. Projections of an uncontrolled spread of COVID-19 in the United States indicated it could pose a similar risk in this country. In particular, the number of severely ill people with COVID-19 could outnumber the available hospital beds, ICU rooms, and ventilators.

Kaplan called on his colleague Edieal Pinker, Yale SOM’s deputy dean and the BearingPoint Professor of Operations Research, to help with the analysis. “Rather than attempting to forecast downstream arrival rates, we instead focused on determining the maximum arrival rates the hospital could handle before significant COVID-19 ICU bed blocking would occur,” Kaplan writes in his paper. “Bed blocking” means that an ICU bed won’t be available for a patient who needs it.

Kaplan and Pinker modeled a host of scenarios with different numbers of available beds and varying loads of patients coming in. Their findings suggested that even a single COVID-19 patient per day arriving in the ICU could lead to blocking under current resources. In addition, COVID-19 patients require negative pressure rooms to prevent the further spread of the infection, and those rooms were dispersed around the hospital. Kaplan and Pinker recommended repurposing a portion of the Smilow Cancer Hospital to create a dedicated COVID-19 ICU, which could handle many more patients per day while isolating highly infectious COVID-19 patients in one ward.

Starting in late March, Kaplan was asked to help the State of Connecticut better understand hospital bed needs in the state. He worked with data on diagnosed cases of COVID-19, hospital admissions, deaths, and tests administered, as well as daily reports of COVID-19 bed occupancy. His goal was to understand trends and make projections that took into account the impact of Governor Ned Lamont’s then-recent “Stay Safe, Stay Home” order, which closed non-essential businesses and urged residents to minimize contact with others with the goal of slowing transmission.

His work showed that had the trend in hospitalizations from before the “Stay Safe, Stay Home” order continued, the state would have exceeded its hospital bed capacity in early April. “Happily, this did not occur, and the growth in hospitalized COVID-19 patients has slowed, though it is too early to know if this is due to the restrictions enacted on March 23,” he writes. 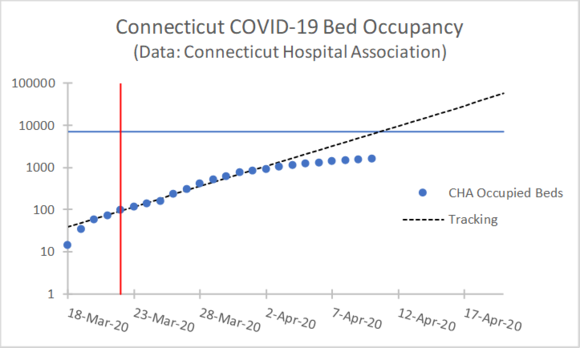 Kaplan also compared the observed hospital data in Connecticut to his model of the disease. This analysis helped him refine his understanding of the disease’s growth rate, and to estimate the number of undiagnosed infections in the region. “Doing so suggested that roughly 9.3% of infections were being recognized as cases, implying that there are more than 10 times as many infections as diagnosed cases,” Kaplan writes.

Further modeling showed that the COVID-19 infection rate in the state “is growing in a manner consistent with 35% social distancing (that is, transmission is only 65% of what it would have been absent the policy); should this pattern continue, COVID-19 hospital occupancy will peak during the second week in May but at a level that is within the number of staffed beds.” Kaplan says that more recent data do provide reason for believing the current state-level restrictions are working, as in recent days hospitalizations are rising even more slowly. 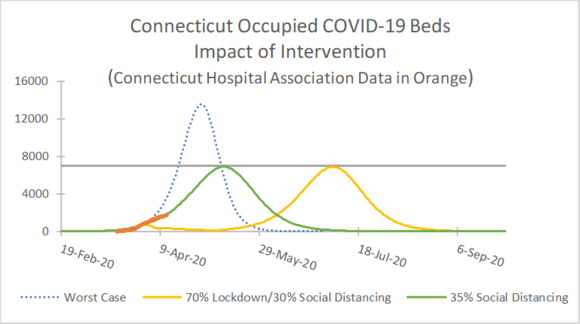 Governor Lamont has extended the “Stay Safe, Stay Home” order through May 20. Kaplan says it’s critical for Connecticut residents to maintain the practice of social distancing through this period so that the state can shore up hospital supplies and equipment. The time will also enable the state to greatly expand testing capacity and be ready to more effectively detect and isolate positive cases. Social distancing works by preventing exposure, meaning that when it is lifted, cases could spike again without other effective interventions.

Kaplan’s modeling work and engagement with public health officials informed a plan for how to keep the disease under control while easing social distancing that he presented in a commentary co-authored with Howard Forman, a professor of radiology and biomedical imaging, economics, and public health (health policy) at Yale, as well as a professor in the practice of management at Yale SOM. The key, Kaplan and Forman argue, is an increase in testing. They argue that in addition to diagnostic tests of people with symptoms and random sampling to understand how widespread the disease is in the community, we need targeted screening tests to identify asymptomatic carriers who could be spreading the disease. Once we have this information, we will also need improved measures to isolate people who test positive, they say. That combination could allow us to open up more activities while containing the spread of the virus.

The question of how and when to restart economic activity by easing social distancing has become a contentious national political issue. But many of the most important decisions will finally be made by individuals, companies, and local officials. “Institutions, cities, and states need help to do this,” Kaplan writes. Scratch models are a particularly useful tool, he says, in the midst of a fast-evolving situation where the answers to many fundamental questions, such as the rate of infection, are unclear. “The issue is not whether scratch models are precise, but whether better decisions are made with models than without them. These models are arguments and leaders have to make the final call.”