A team of Yale SOM student entrepreneurs will travel to Sierra Leone this summer to debut a program aimed at increasing the number of patients taking their antimalarial drugs.

The team, which also includes students from Yale’s Jackson Institute for Global Affairs, founded TextDirect, a nonprofit organization that uses an automated text message system to alert patients when they need to take their medications. While many patients take their medications regularly, most stop taking their pills once they feel better and may be unaware that the disease could still linger in their systems, according to Anudeep Yegireddi ’17, one of the founders of the organization. Increasing drug adherence rates could slow the disease’s mutation and drug resistance, he says. 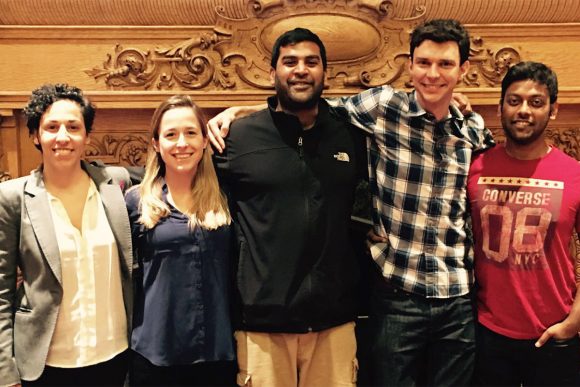 “The disease only becomes stronger when you don’t take your pills,” Yegireddi says. “We want to change the behaviors of patients to change the overall outcomes.”

TextDirect grew out of Professor Mushfiq Mobarak’s course Behavioral Strategies for Selling Products in Emerging Markets, in which Yegireddi and Shashank Iyer ‘17 learned of a 2014 study by the New Haven-based nonprofit Innovations for Poverty Action, showing that Ghanaian patients who received text notifications were more likely to adhere to their malaria treatments. As part of their coursework, the students were required to find a project that was both scalable and worked well in developing markets that solves a consumer need.

“The whole idea started as a simple assignment for a class, but we realized it had a lot of potential,” Iyer says. “We wanted to look at a development solution that is founded on rigorous data. Something that could be backed by research, be cost-effective, and brought to scale.”

About 77% of Sierra Leone’s population has access to a cell phone, according to data collected by the World Bank. That presents an opportunity, Yegireddi says, since even those without phones can get reminders from family or friends to stay on their medications. In August, the group plans to work with local health clinics to train workers on how to use the program and sign up potential patients for the service. As an incentive, health workers will receive a mobile phone credit for each patient they register with the service. The service will then regularly send personalized notifications reminding patients to stay on their medications, he said.

“If the health workers buy into this program and we have them onboard, there’s an immediate reinforcement of the results we are seeking,” Iyer says.

Yegireddi, who has experience working with large databases for companies, and Iyer, who worked in international development prior to arriving at Yale, viewed mobile messaging technology as an opportunity to use their skills to help tackle a public health problem. Their efforts were rewarded: the team entered the D-Prize Competition, which challenges students to build a social enterprise to fight against global poverty, and won a $20,000 prize to fund their initiative.

The service will be launched in Freetown, Sierra Leone, initially targeting a handful of clinics. The long-term aim is to help combat malaria using similar notifications across Africa, and eventually expand to notifications for other diseases, including HIV/AIDS.

The group isn’t expecting a perfect rollout, Iyer says. But, he added, Yale SOM has taught him and his colleagues how to anticipate the unexpected in an unfamiliar environment and face challenges as they present themselves.

“That’s the fun part: we’ll be getting our hands dirty and working alongside multiple stakeholders on the ground to see what works, what doesn’t, and what motivates people,” Iyer says.