A student team from the Yale School of Management won the Yale-Geithner Challenge: Visualizing Financial Crises in the Modern World on April 30. The team won for an animated video explaining the role that the wholesale funding market played in the financial crisis. 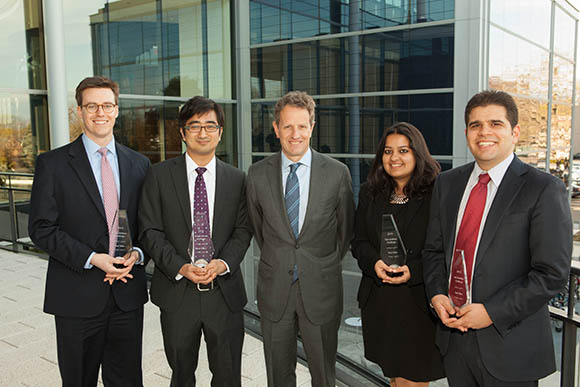 “Our objective was to find a topic that was integral to the crisis but not discussed so much in the coverage,” Kim said. “It really was important to us to find ways to explain what happened in the financial crisis in more accessible ways than academics do and politicians do.”

For the competition, teams of students from Yale SOM and other Global Network for Advanced Management schools created videos exploring the causes and management of worldwide financial crises. The other finalists included another team from Yale SOM and a team from Fudan University’s School of Management, which traveled to New Haven for the ceremony.

The audience, which included 80 Fudan University students who were at Yale SOM attending an Executive Education program, watched all three finalist videos.

“It was good that you chose to focus on the intermediary, in some sense, and the core vulnerability in how they chose to fund themselves,” Geithner told the winning team. He praised all 14 entries, saying, “All of them were fantastic.”

The video competition was part of Geithner’s ongoing partnership with Yale SOM. In 2014, he delivered a series of lectures on the global financial crisis of 2007-2009, as part of a course that he co-taught with Andrew Metrick, Yale SOM’s deputy dean and the director of the Yale Program on Financial Stability.