This year marks the 25th anniversary of Yale SOM’s Chief Executive Leadership Institute (CELI)—the world’s first school for incumbent CEOs. The CEOs and political leaders who attend CELI programs don’t hold back, says Jeffrey Sonnenfeld, the institute’s founder, president, and CEO. Behind closed doors, among their peers, they feel free to take a hard look at themselves and at each other. 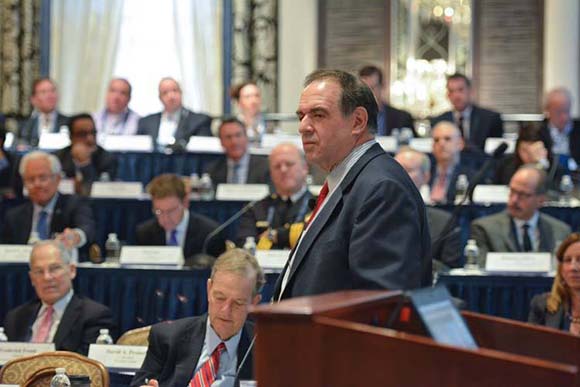 “We’ve now held 80 of these distinctive CEO forums and are told by CEOs that these sessions uniquely capture how high profile CEOs with over-packed schedules, and flooded with reports, actually learn, themselves,” says Sonnenfeld.

“Top leaders worry that they can atrophy in high office without timely feedback and non-commercial, objective information. These discussions can be very charged, emotional, and forceful exchanges. They come here to learn from each other, to examine their decisions and the issues they all face. It’s probing exchanges and rapid-fire repartee.”

This ability to get candid, confidential feedback in what Sonnenfeld calls a “safe setting”—what happens in CELI stays in CELI—is what draws top-ranking business and government leaders to the Yale SOM program. The discussions offer perspectives and feedback that C-suite professionals can’t always get in their offices, where the pace of work leaves little time for reflection.

“The result is that too many leaders tend to stagnate in their roles,” Sonnenfeld says. “Too often, they’re insulated by an inner circle, and their practices aren’t being challenged. They see SOM as a clearing house for cutting-edge information in what’s new and different about top leadership and a place to rethink their roles.” Sonnenfeld, also SOM’s senior associate dean for leadership programs and the Lester Crown Professor in the Practice of Management, oversees all the institute’s programs: the CEO Summit, CEO College, and CEO Caucus.

Sonnenfeld researches all CELI participants’ careers beforehand—their highs and lows—so that he is better able to guide conversations. During sessions, no PowerPoint presentations or prepared speeches are allowed. Conversations are free-flowing and interactive, he explains. The participants include heads of state, top cabinet officials, prominent legislators, and CEOs from the largest enterprises across sectors, countries, and continents.

The semiannual CEO Summit has been held in locations including New York, Beijing;  Washington, D.C.; Atlanta; New Delhi, Shanghai, and Mumbai. Summits bring together top business leaders and policy-makers, as well as leading academics, for candid, off-the-record discussions. “These are the most influential opinion leaders in business and society in the world,” Sonnenfeld says. “You get them all in one room, and interesting things happen.”

The most recent CEO Summit, the 80th,  was held at the Waldorf Astoria in New York City in December 2014. Topics included China’s role in the global economy, the role of shareholder activists, and evaluating CEO performance.

Held in conjunction with the CEO Summit, the CEO College is a one-day, intensive seminar that offers a small group of executives the opportunity to explore corporate challenges in discussions with faculty members from major universities.

“These smaller, more intimate discussions provide more one-on-one with scholars and a chance to perhaps dig a little deeper into topics of particular concern,” Sonnenfeld says.

Some of the issues that participants in the most recent CEO College discussed included overcoming career setbacks, the character of leadership, and understanding geopolitical risk.

“It’s held in the perfect location for these people to come together,” Sonnenfeld says. “Very central in D.C., near everything. Topics are pulled right from the headlines of the day.”

“The candid exchanges we shared are vital for mutual understandings to build a better tomorrow between countries, cultures, and companies,” wrote Fu Chengyu, chairman of Sinopec, after one summit. “These discussions are rare if not impossible outside of this room.”

Kenneth C. Frazier, chairman and CEO of Merck, said that he’d be signing up for future CELI programs. “I cannot recall a discussion as candid, thorough, and helpful to people like us on the front lines, heading large enterprises,” Frazier wrote. “I learned a great deal from the real peers in the room sharing genuine common challenges.”