In his second lecture at the Yale School of Management this semester, former U.S. Treasury Secretary Timothy Geithner discussed the governmental policy choices that he helped orchestrate in response to the financial crisis of 2008.

The lecture was one of three that Geithner is delivering as part of the course Global Financial Crisis, a for-credit class open to students throughout Yale and co-taught with Yale SOM Deputy Dean Andrew Metrick, the Michael H. Jordan Professor of Finance and Management. 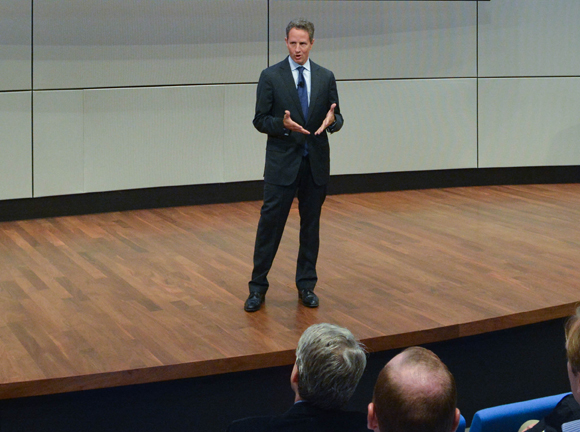 "I believe that the quality of outcomes, the level of tragedy and the damage a crisis causes, is not just about the design of the system," Geithner said. "It’s really also substantially about choices that government’s central policy makers make when they’re confronted with the storm… On the eve of the crisis, we had plenty of resources in our country relative to our challenge, but the tools we had relative to the challenge were weak… This fundamentally affected our ability to escalate quickly as the crisis began."

Titled "Fighting Financial Crises: The Cause and the Craft," Geithner’s lectures are being delivered under the auspices of the Arthur M. Okun Public Policy Lectures. They are open to the Yale community and shared via videoconference with member schools in the Global Network for Advanced Management.

Geithner’s first lecture, which explored causes of the crisis, was delivered on October 1. He will return to Yale SOM on December 3 for a lecture exploring possible policy responses to future financial crises.