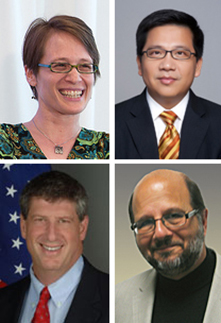 Yale School of Management Dean Edward A. Snyder announced today that four graduates of the school have been selected as 2012-2013 Donaldson Fellows. The fellows were recognized for exemplifying the school's mission to educate leaders for business and society. In the private, public, and nonprofit sectors, they have taken on the big problems facing an increasingly complex and globalized world and made a difference.

Read biographies of all of the Donaldson Fellows.

The four Donaldson Fellows will come to the Yale SOM campus from February 7 to 8 to participate in a series of panels and discussion groups with students.

A committee chaired by the dean and comprised of SOM faculty, alumni, and students selects the Donaldson Fellows. Selections are based on nominations from members and friends of the SOM community.