This event is open to the public. Registration is required.

The Poynter Fellowship in Journalism brings to the Yale campus distinguished reporters, editors, and others who have made important contributions to the media. 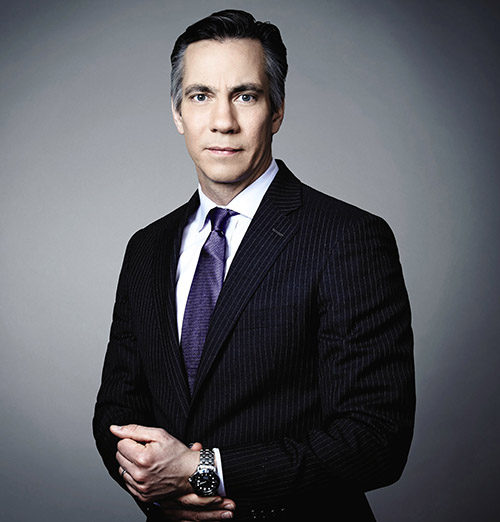 He reports and provides analysis across the network's programs and platforms on all aspects of U.S. national security including foreign policy, the military, intelligence community, and the ongoing Russia investigation. Sciutto also serves as a fill-in anchor for several of the network's programs.

The United States is vastly underestimating, and bungling its response to, the growing security threats that China and Russia pose, according to Jim Sciutto, CNN’s chief national security correspondent.

“There is an undeclared war that Russia and China are waging against the United States and the West,” Sciutto, a 1992 graduate of Yale College, told an audience at the Yale School of Management on October 30. It’s a clandestine war of subterfuge and theft and acts of violence, waged on multiple fronts. “China and Russia, over the last 10 years, have done a remarkably good job at this,” Sciutto said.

Sciutto spoke at Yale SOM as part of the Poynter Fellowship in Journalism Speaker Series, which brings distinguished journalists to Yale to share their research. He discussed his new book, The Shadow War: Inside Russia’s and China’s Secret Operations to Defeat America. Deputy Dean David Bach moderated the conversation.

“The goal of the book, as Jim says, is to ‘connect the dots’—how cyberattacks, the growing arms race in space, territorial conflict, election interference, social media propaganda, and industrial espionage fit together,” Bach said. “All of this affects business, and business is often involved, whether deliberately or inadvertently, and is thus exactly what we need to think about and understand at the Yale School of Management.”

It is an issue that many have chosen to ignore, Scuitto said. There is abundant proof that China and Russia seek to undermine the U.S. and the West in general, he said, but the U.S. has been slow to respond, choosing instead to view China through a “mirror, imagining that they want what we want,” and believing that, as China’s economy grows, it will come to respect international rules.

“The U.S. has persisted in this delusion, in the face of reams of evidence,” Sciutto said.

Chinese leaders have publicly stated that their goal is to surpass the U.S. in economic might, Sciutto said. Russia, he added, is a “cornered-rat” collapsed empire with a zero-sum game mentality, and is behind a host of ongoing manipulations and “horrible, brazen crimes,” such as the nerve toxin poisonings of Russian dissidents on British soil, and repeated cyberattacks on Estonia—not to mention meddling in the U.S. electoral process.

China and Russia are waging their shadow war on multiple fronts, Sciutto explained, including electoral interference and the spread of misinformation in the U.S., and the development and deployment of weapons and satellites in space to undermine the U.S. military.

Stealthier submarines—based on technological designs stolen from the U.S.— are already violating U.S. borders. "Russia will occasionally pop up off the coast of Florida,” Sciutto said.

Another tactic is “old school, 19th-century land acquisition,” Sciutto said. Russia invaded Ukraine and annexed Crimea in an effort to reestablish its power, and China, through a dredging process, is building islands in international waters in the South China Sea that are large enough to accommodate landing strips and that establish deep water channels to allow the passage of military ships.

Shadow acts of aggression like these could very easily culminate in all-out war, Sciutto said.

The U.S. failure to respond has been bipartisan, he added. “There is plenty of blame to go around between Republican and Democratic administrations,” he said, asserting that former presidents George W. Bush and Barack Obama, as well as President Donald Trump, have all underestimated the threats from Russia and China.

Bach asked about the business community’s role, and how companies can better respond to the threats, especially in light of the importance of China’s growing economy.

“Business is right in the middle of it,” Sciutto said. Chinese theft of intellectual property, for instance, has been tolerated, with companies mistakenly believing that economic engagement with the Chinese will change the dynamic and lead China to respect international law and treaties.

“There is a delusion that economic growth will lead to political liberalization,” Sciutto said. But, he said, one need only look at the Tiananmen Square massacre in 1989 and the crackdowns in Hong Kong today to see that the Chinese government hasn’t changed all that much. “It’s frightening when technology is married to authoritarianism,” Sciutto said.

Reestablishing and protecting U.S. boundaries and security should be a top-level priority of both business and government today, Scuitto said.

And while there is no single “silver bullet” solution, imposing harsher consequences for transgressions and initiating innovative offensive strategies would be a good start. “We need clear red lines,” Sciutto said. “And we need to raise the costs.”