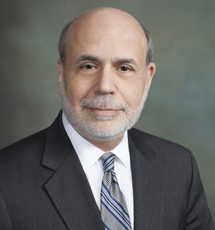 In this lecture, Dr. Ben S. Bernanke, Distinguished Fellow in Residence at the Brookings Institution and former chairman of the Board of Governors of the Federal Reserve System, will discuss his research on the connections between the financial crisis of 2007 to 2009 and the ensuing Great Recession.

The aggravating factor that turned the 2007 financial shock into a full-blown, global economic crisis was the panic it inspired, according to Ben Bernanke, former chairman of the Federal Reserve.

“The major practical insight that post-crisis analysis has yielded is the importance of controlling panic,” Bernanke told an audience at the Yale School of Management on April 10. Panic overwhelmingly caused the crisis to seep into aspects of the “real economy” as seen in the rise in unemployment and a decrease in the availability of consumer credit.

“This was a ‘Wall Street’ problem, but it was also a ‘Main Street’ problem,” said Bernanke, who oversaw the Fed’s response, including extending emergency loans to struggling banks and other financial institutions and the use of quantitative easing. “Panics are very dangerous and have implications for the broader economy.”

Bernanke spoke at Yale SOM under the auspices of the Arthur M. Okun Public Policy Lecture series, which recognizes economists working on policies aimed at improving life. Bernanke is now a distinguished fellow-in-residence at the Brookings Institute. Sterling Professor of Economics Robert Shiller moderated the discussion.

In his talk, Bernanke drew on research that he and colleagues at the Brookings Institution have been conducting in the aftermath of the crisis. Their work seeks to understand which aspects of the crisis fallout caused the greatest amount of harm and contributed most to the ensuing recession.

“The crisis was basically a bank run,” Bernanke said. “But it took place in a sophisticated, modern financial context.” Instead of consumers standing in lines to withdraw their money from banks, “we saw institutional investors pressing a button.”

The new research elucidates how investor panic in 2007-08 had an adverse effect on the supply of credit, which contributed to the broader economic downturn.

Prior to the crisis, Bernanke said, the Fed’s macroeconomic models greatly underestimated the impact a financial panic would have on the real economy. In the future, U.S. monetary policy needs tools that include “strong actions” aimed at addressing panic before it sinks the economy.

“[The crisis] was a huge event,” Bernanke said. “It had profound impacts not just on our financial markets but on our economy and wellbeing.”

Bernanke said that it’s imperative that people remember the lessons of the crisis and continue striving for a financial system that is more resistant to crises.