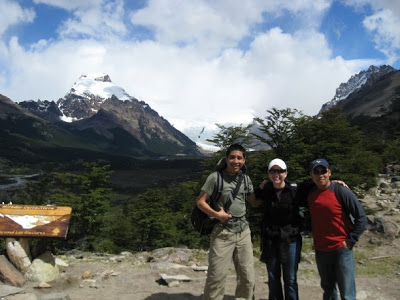 Well, the final semester of SOM is here and the class of 2008 begins its march to graduation. It's come too quickly in my opinion, but what can you do but enjoy, have fun with friends, and soak it all in? For me, "having fun and soaking it all in" has been the motto to which I have aspired to during my time at SOM. No doubt trips like my recent adventure in Chile and Argentina with study group members will be the kind of things I value and miss most after I leave SOM. To recap, thanks to SOM's very nice winter break schedule, I essentially had a holiday break from December 15th till January 22nd. With so much time off, the three of us planned a 3 week trip to Chile and Argentina. Naturally with 3 weeks and 24/7 exposure to the same 3 people, there were some personality clashes. That said though, the trip was fun and a good mix of city-scapes, wine country, action and adventure, and natural scenery (pictured above is a pic of the 3 of us at the El Chalten National Park... Patagonia) Since I enjoy applying the SOM grading scheme to everything - from food, to vacation days, to tv shows, LBO candidates, professors at SOM, etc. etc., its only fitting that I do the same and mention some aspects of the holiday that warrant a "distinction" (top 10% of the class in Yale SOM-speak). Distinctions

That's about all I got for now. As its the last semester I'll try to write a bit more in the upcoming months to capture whatever's left of my Yale experience. Before I go though, I of course will leave a collage of selected images picked from my 500+ pics taken over the 3 weeks 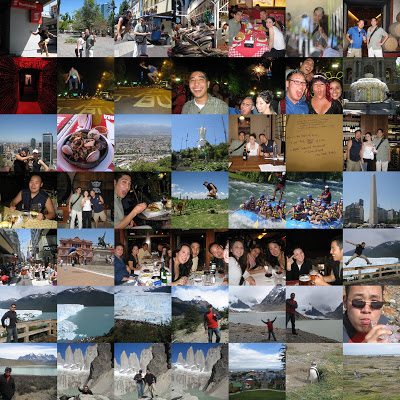