Use of Federal Reserve Programs

The Federal Reserve recently announced a number of lending facilities, based on programs first implemented during the Global Financial Crisis of 2007-09. This post provides an update on the use of Fed lending programs since April 16. It also introduces the Fed’s newest lending facility, the Paycheck Protection Program Liquidity Facility (PPPLF); discusses international use of the Fed’s liquidity swap lines; and provides an overview of similar lending programs in Europe and the United Kingdom. Our previous post on the early use of Fed programs is available here.

Recent use of Fed programs

The total outstanding amount for the Fed’s main lending programs has changed little over the past two weeks, increasing from USD 120bn to 123bn, down slightly from a peak of USD 129bn on April 9. Usage of the discount window declined by USD 5bn since April 16.

The declines in usage of the MMLF and PDCF were offset by the extension of loans through a new facility, the Paycheck Protection Program Liquidity Facility (PPPLF).

Usage of the Fed’s USD liquidity swap lines continued to increase over the last two weeks. Swap lines remain the largest program, with USD 438bn outstanding as of April 30. The use of the Foreign and International Monetary Authorities (FIMA) Repo facility, available to provide US dollar liquidity to central banks that don’t have access to an established swap line with the Fed, remains negligible at USD 2mn outstanding.

The Fed has yet to launch two corporate bond purchase programs that it announced on March 23.

The Paycheck Protection Program Liquidity Facility (PPPFL) allows the Fed to provide financial institutions with liquidity backed by loans to small and medium businesses extended under the federal government’s Paycheck Protection Program. The PPPFL was announced on April 9 and became operational one week later. Immediate use was moderate with USD 8bn outstanding on April 23. It stands at USD 19bn as of April 30, showing a large increase as other asset-purchase programs saw their outstanding balance decline.

On April 30 the Fed announced an extension of the program, allowing it to include additional lenders and expand eligible collateral. Under the new framework, eligible lenders include all lenders approved by the Small Business Administration (SBA). Also, lenders can now pledge purchased PPP loans as collateral.

The network of 14 dollar liquidity swap lines remains the most used emergency program with USD 438bn outstanding as of April 30. On average, the outstanding amount has increased by USD 14bn every day since March 19. The European Central Bank (ECB), Bank of Japan (BoJ), Bank of England (BoE), and Swiss National Bank (SNB) drew funds on the first day of the program and were gradually joined by six other central banks. By April 3, 10 central banks had a positive outstanding balance. 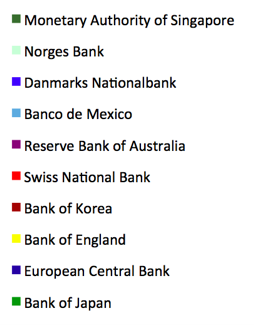 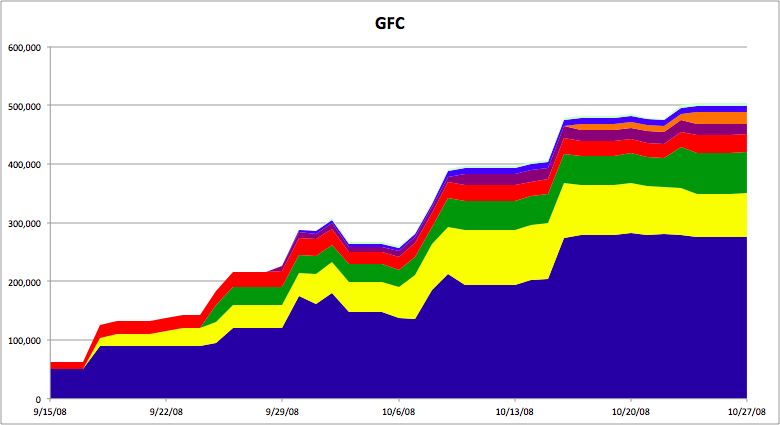 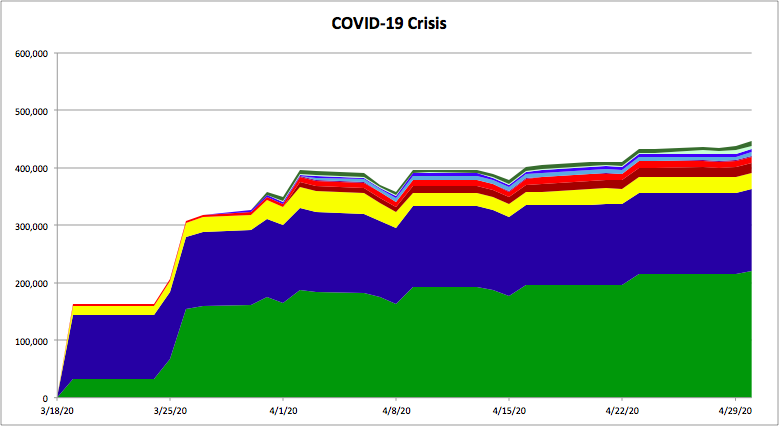 As during the Global Financial Crisis of 2007-09 (GFC), the BoE, BoJ, and ECB constitute the three largest counterparties. They have drawn 88% of funds currently outstanding. The ECB was the largest single counterparty during the GFC with USD 313bn outstanding at its peak. The ECB also made heavy use of the line during the first days following the announcement of the facilities. It drew USD 112bn on March 19, the first day the facility was reactivated. The ECB has since slowly increased its use of the line to USD 143bn outstanding on April 30, on average by USD 1bn per trading day. The BoJ has increased its usage more gradually and has exceeded the ECB’s use since March 26. Since then, the BoJ has increased its drawings by USD 6bn every day on average, as of April 30 it has USD 220bn outstanding.

The ECB announced its main asset-purchase program, the Pandemic Emergency Purchase Program (PEPP), on March 18. It expects to purchase up to EUR 750bn in private and public sector securities until “the COVID-19 crisis phase is over.” As of May 1, the facility had EUR 118bn outstanding, 0.7% of the Eurozone’s GDP. The marginal lending facility, the ECB’s equivalent of the discount window, has no balance outstanding as of May 1.

In the UK, the BoE implemented the Covid Corporate Financing Facility to purchase commercial paper from British issuers. As of April 29, the facility has an outstanding balance of GPB 15.91bn, or 0.7% of GDP. The USD 123bn in loans outstanding at the Fed as of April 30 constitute 0.6% of GDP. 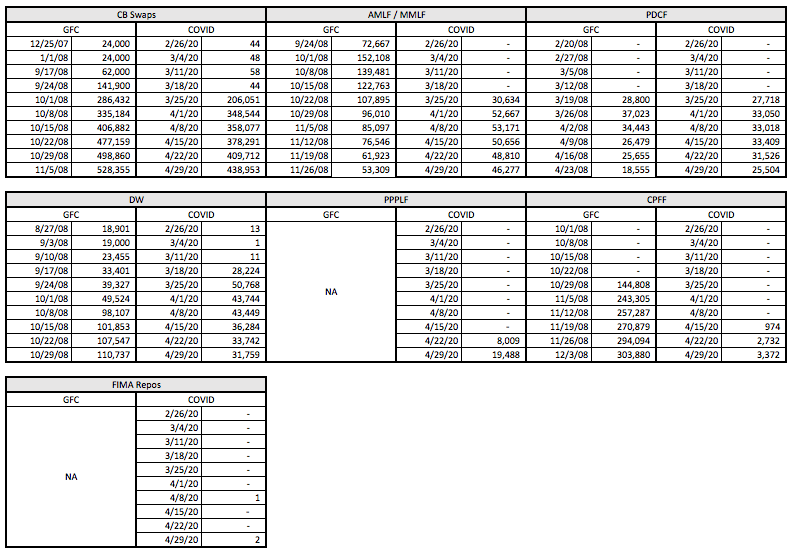