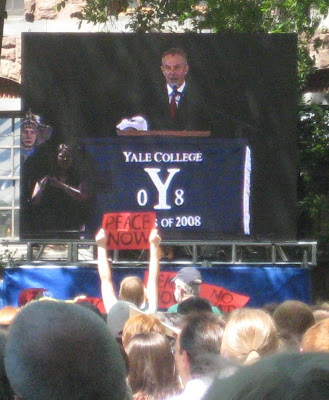 Tomorrow I officially graduate from the Yale School of Management, armed with an MBA and about to be re-launched into the real world. I'm sad, in denial, anxious, and in utter disbelief that this occasion has come so quickly. Today was Yale College's "Class Day", continuing a Yale tradition where a major speaker addresses the graduating class the day before commencement. Here to address the class of 2008 was Tony Blair, former Prime Minister of Britain. Although Class Day is really about the undergrads at Yale College, it is open for all graduate students so a large contingent of SOM students made the trek over to Old Campus to take part in the festivities. I quite enjoyed Tony Blair's speech, though it did not blow me away like I thought it would. He touched on issues like globalization, Yale's place in the world, the need for graduates to see the bigger picture... he joked about how he was the first Brit to be invited to speak at Yale's commencement ceremonies... but to me, the most poignant moment of his speech was when he talked about parents. He gave a personal anecdote about meeting his dad at the train station after his first year at Oxford, talked about how we as graduates can't envision being as old as our parents but how our parents always remember being our age, and acknowledged that while its often "hell" from both the parents and the kids' perspectives, ultimately parents love you (he was much more eloquent than what I've written of course, but it really was the highlight of the speech in my opinion). As for tomorrow's Yale SOM commencement, graduation, or convocation ceremony (whatever you like to call it) it is then that I will receive my degree and graduate. Its been almost 2.5 weeks since my last exam in an MBA classroom and in the interim I've been so busy with fun and games like the class trip to Florida, apartment hunting in New York, baseball games in Cleveland and Boston, etc. etc., that I haven't really had time to be introspective and mentally acknowledge that this whole experience is coming to an end. I'm still not prepared to put my final thoughts down, so for now I'll leave this blog entry with some photos from our final class dinner, a very nice evening at the New Haven Lawn Club...(complete with photos with some key faculty). No photos from the Florida class trip will be posted because what happens in Hollywood Florida, stays in Hollywood Florida. :P Needless to say it was a fun trip with lots of pool, sun, beach, clubbing, and eating. 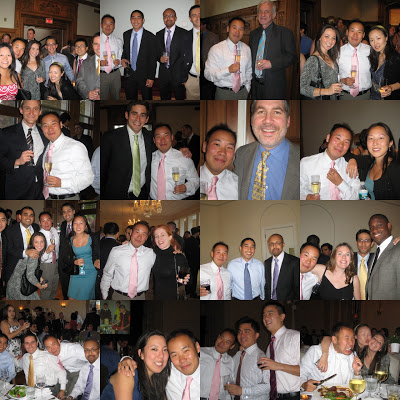 PS: To those who were wondering, YES, I have found an apartment in New York City- I'll be living in the Hell's Kitchen area a couple blocks south of Columbus Circle. The apartment is a good-sized studio, has a doorman, its an elevator building, there is a gym, a beautiful rooftop terrace, and its a short walk from a lot of subway lines and not too far from Central Park where I fully intend to run and explore on a regular basis. My lease agreement starts in early June and I'm super stoked. Next time I write, I will no longer be an SOM student but a member of the Yale SOM alumni community. Stay tuned!