The Limits of the G20's Debt Service Suspension Initiative

As of May 1, G20’s Debt Service Suspension Initiative (DSSI) for 76 International Development Association (IDA) countries and least developed countries (LDCs) has become operational. However, it remains unclear whether private-sector creditors will collaborate on such efforts for those countries and the question on what to do about the much larger debts of low- and middle-income countries is still open.

On April 15, the G20 announced the DSSI, which is an eight-month official bilateral sovereign debt payment suspension if requested by International Development Association (IDA) countries and least developed countries (LDCs) that are current on their International Monetary Fund (IMF) and World Bank (WB) obligations. The DSSI allows 76 IDA countries and Angola to suspend principal or interest payments on their debts to G20 members from May 1 through the end of 2020.

Once the eight months elapse, the countries will have to pay the deferred principal and interest over the three years following a one-year grace period. This deferral is net present value neutral, and therefore, does not reduce the total payment debtors will make to participating creditors. The Paris Club, the informal group of official creditors for negotiating sovereign debt restructuring, has endorsed the DSSI and is trying to secure China’s participation.

The G20 also urged private-sector creditors to participate in this initiative on comparable terms. The Institute of International Finance (IIF) is leading the discussion on voluntary participation in the DSSI. The IIF is a global association for the financial industry that has historically served the London Club, the once-powerful informal committee of commercial creditors that seeks to build consensus for restructuring syndicated loans to sovereigns.

Some caution that these efforts may not be enough to address the true debt-relief needs of many low and middle income countries struggling to deal with COVID-19 crisis. Many of these countries simply do not have the fiscal capacity to weather the storm and have a mix of creditors that make them especially vulnerable.

This post highlights the following  additional actions that may help to enhance meaningful assistance to the countries in need:

Overindebtedness in the developing world was one of the main concerns of 2019 IMF Spring Meetings. As COVID-19 crisis unfolds, both low  and middle-income emerging markets have to grapple with increasing fiscal burdens as well as investors’ flight to safety.

What does G20 standstill amount to?

The DSSI is estimated to free up about $11 billion in funds ordinarily used for paying principal and interest to bilateral official creditors, in addition to $7 billion from multilateral official creditors. However, this is only a portion of the debt payments these 77 countries will be facing through the end of 2020. The uncertain nature of the COVID-19 crisis means that it is difficult to determine whether countries’ current sovereign debts are sustainable. A wave of sovereign defaults could be catastrophic for those countries. Although the IMF has helped countries through such temporary crises, it does not have enough resources to deal with the problem alone. 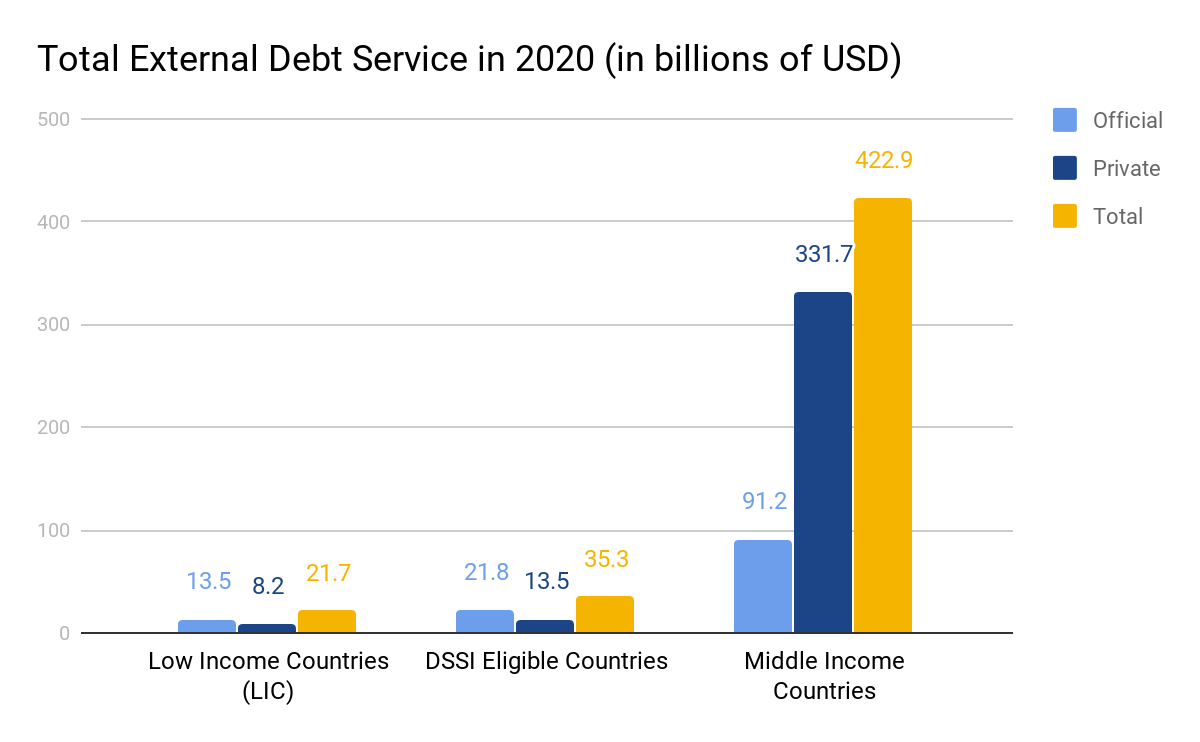 Some propose that the G20, by creating a “Sovereign Debt Coordination Group consisting of sovereign borrowers and representatives of the official and private creditor community,” could make restructuring within the current system more workable. Some scholars suggest that comprehensive suspension of debt obligations that compels private-sector creditors to accept less than they would receive in a restructuring should be justified on the grounds of necessity. They propose a mechanism by which the private-sector participation is mandatory and immediate through a blanket restructuring of terms. This stands in contrast to the voluntary participation pursued by the IIF, in which creditors would agree on suspension after lengthy negotiations.

However, the contract-by-contract-approach the IIF supports means at least a minority of these creditors may become holdouts. A portion of those holdouts may even litigate, further complicating restructuring, as seen in the early days of the IMF’s Heavily Indebted Poor Countries initiative. Enforcing a blanket standstill, on the other hand, could cause credit rating downgrades, shutting these countries out of international capital markets and potentially creating incentives for them to default on their obligations to private creditors.

Middle-income countries have significantly more external debt (Figure 2) and are expected to pay $422.9 billion in debt service in 2020. Only 22% of this is to official creditors (Figure 1).

These countries, like the DSSI-eligible countries, may also be quickly running out of fiscal capacity to deal with the COVID-19 crisis. Capital outflows from emerging markets seem to have stabilized, after foreign investors took around $100 billion out of emerging market stocks and bonds in the first quarter. The IIF projects that emerging markets may find it hard to borrow large sums internationally this year. It also expects emerging markets to run unprecedented fiscal deficits this year.

Moreover, a wave of defaults by emerging market economies may pose a threat to the financial stability of advanced economies. The last time a large portion of the sovereign debt market was at risk of default was during the Latin American debt crisis of the 1980s. Large American bank exposures to these debts triggered financial stability concerns in the US. 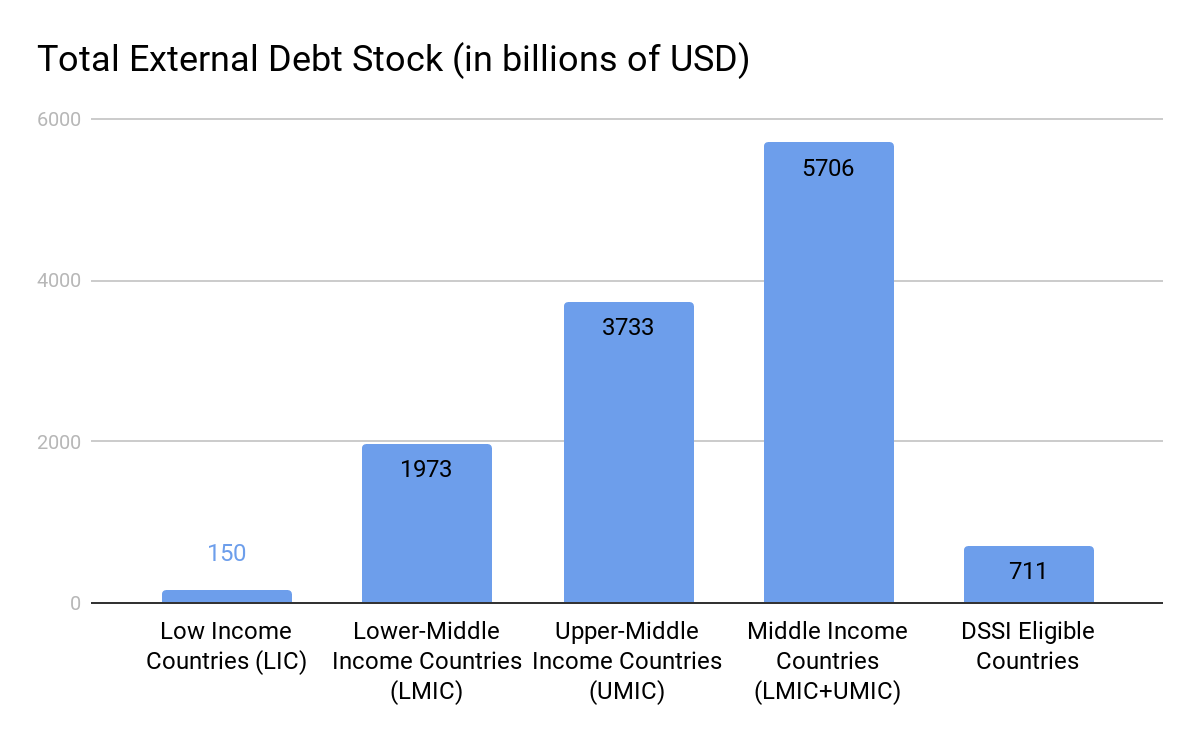 However, coordinating a DSSI-like action across all creditors will be even more complicated for middle-income countries. As seen in Figure 1, these countries have a heavier reliance on private-sector creditors, including bonds. This is especially the case for larger emerging market economies. Bonds can have thousands of holders in a given issue and, in spite of collective action clauses (CACs) becoming more common, it can be extremely difficult to negotiate standstills on an individual basis. CACs are structured to help coordinate the actions of holders of a specific bond issue and countries may have multiple bond issues, raising another coordination problem. Investors have also been able to amass large enough positions in specific bond issues to block restructurings. Investment funds holding emerging market bonds may again contemplate holdout strategies.

Another complicating factor in expanding eligibility to middle-income countries is that the IIF’s effort to convince private-sector creditors to restructure DSSI debt is based on assurances that eligibility will not be extended beyond the current list of countries. In facilitating the discussion among private-sector creditors to participate in the DSSI, the IIF said that “comments from IMF and Paris Club officials noting that there is no intention to make the DSSI broader in scope have also been helpful.”

The purpose of the standstill arrangements is to help debtor countries free up resources to respond to the current pandemic. Creditor states are seeking to create a mechanism to ensure the money freed up from suspension of debt payments will be used for that purpose.

One proposal is to create a central credit facility (CCF) at the World Bank. The CCF would allow a country requesting temporary relief to deposit stayed interest payments to use for emergency funding to fight the pandemic. Multilateral institutions would monitor it to ensure that payments are used for emergency funding. The CCF would mix payments to the CCF with aid money from international organizations. To reassure creditors, it would be considered senior to other debt in any debt restructuring. The CCF has some academic support and has received some positive press. Versions of the proposal have been published by the UN’s ECOSOC and a number of academic institutions, but it is still not clear whether governments will adopt the policy.

Currently, there is no mechanism like corporate or individual bankruptcy for sovereigns. There were attempts in the past to have a sovereign resolution regime, such as the IMF’s Sovereign Debt Restructuring Mechanism (SDRM) proposal in 2002. That proposal failed to obtain necessary support due to differing views on various design features. The SDRM was proposed in light of a development of a “diverse and diffuse creditor community posing coordination and collective action problems” for sovereigns. Some scholars suggest that a broader reform of the sovereign debt restructuring regime may also be necessary to deal with the problem of holdout creditors.

In the 1930s, Herbert Hoover’s 1931 debt moratorium was followed by a wave of sovereign defaults. Defaulting countries ultimately recovered from the Great Depression faster than those that resisted default. Nonetheless, defaults contributed to a “hiatus in private foreign lending of more than twenty years during which few countries had access to commercial financing outside their own borders.” Private lending to sovereigns, as well as discourse on sovereign debt restructuring, had only begun to return in the 1970s, and sovereign bonds only returned to prominence after the 1989 Brady Plan. A wider international effort in responding to sovereign debt may become necessary as the COVID-19 crisis unfolds globally.