During 2014 and 2015, Brazil was hit by one of the strongest droughts in the country’s history. This water crisis led to the challenge of providing water to Sao Paulo’s 20 million residents. In charge of solving and managing this water crisis was Jerson Kelman, CEO of SABESP. SABESP is Sao Paulo’s publicly traded (NYSE: SBS) water and waste management company with a customer base of 28 million. It is the fifth largest waste management utility in the world by number of customers.

On November 18, the Latino Leadership Association along with SOM’s Energy Club, Economic Development Club, and Business & Politics Club, and the Water Club at the School of Forestry & Environmental Studies hosted a talk by Kelman on his experience as a business leader managing the water crisis in Sao Paulo state. 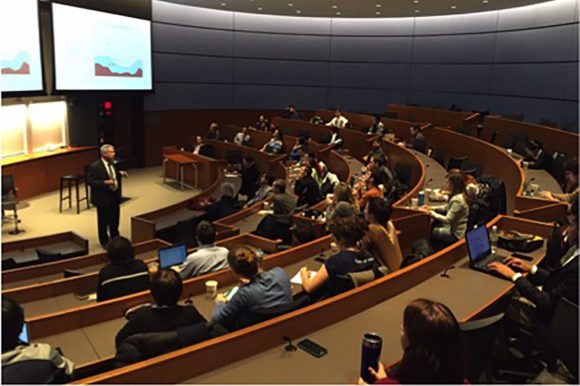 Among the biggest complications during this crisis was that 60% of SABESP’s affected population lived in urban areas with no alternative access to water sources (e.g. rivers or ponds). The drought of 2014-2015 was twice as dire as the one recorded in 1953-1954—the year of water resources, according to SABESP’s historical data—and the historical data suggested a probability of 0.4% for a drought of this magnitude to happen. Neither SABESP nor the Brazilian government was prepared for this crisis, explained Kelman. Given this, he was hired at the most critical moment of the crisis as CEO, and one of the first things he did was to be completely transparent with the public on what the situation was.

Through a series of investments in pumping stations to pump water from the dry reservoirs and dams as well as astute investments in areas of untapped water resources in Sao Paulo, Kelman was able to provide water to most of Sao Paulo’s population. On the demand side, he implemented discounts on water bills for consumers who saved water and penalties to consumers who increased their water consumption, albeit with some political resistance. In spite of popular and political pressure, he also avoided having sectorial rationing as reducing the network’s pressure would lead to greater leakages.

Kelman is an example of a leader who has made a positive impact in business and society through his technocratic approach. His talk taught me that even in highly politicized institutions, such as emerging-market government-sponsored enterprises (GSEs), technocrats can strive and lead organizations. It’s a good reminder that the outlook for data-driven managers will continue to be positive in the future, even in GSEs.