Everyone in the Yale SOM community has a reason to recycle and compost: Doing so saves money for Yale SOM, reduces unsightly landfills, and benefits the environment. But too often, recyclable and compostable materials have been winding up in the trash.

When SOM moved into Evans Hall two years ago, compost bins were made available for organic waste, but students did not always have a clear understanding of what waste went in each bin. The bins were color-coded to aid proper waste disposal—but colors varied from floor to floor within Evans and from building to building across Yale. Further, proper waste-disposal practices differ from city to city, state to state, and country to country. With students and visitors from across the globe, SOM faces unique challenges in reducing contamination across its waste streams.

As we spoke with the diverse body of students, faculty, and staff that inhabits Evans Hall, it became clear that the folks here want to do the right thing. This is not a place where the deleterious effects of plastics leaching into landfills are doubted. So, the question became, how do we enable these folks to sort their waste properly? Could we make the decision easy? Clear? Maybe even fun?

We reached out to Bill Peabody, SOM’s director of facilities operations, whom I now describe to friends as “the guy who keeps Evans well-oiled.” As we started brainstorming with Bill about how to reduce contamination, we uncovered just how committed the school already was to this matter. The kitchen staff composts all food waste that’s returned on the carousel, the Facilities team carefully separates and weighs recyclables on the loading dock, and staff members install color-coded trash and recycling bags in all bins around Evans Hall.

What was missing was a concerted effort to bring the habits of students, faculty, and staff in line with the capabilities of the Dining & Facilities teams. And so Trash Bash was born.

Our goal was to bring SOM’s collective behavior to the forefront. In the hubbub of the daily rush, it is hard to take time to figure out a waste-sorting system. Yet, the trash that Evans Hall produces is simply the aggregate of our choices. Nearly a half-ton of waste is produced here every day; about half should actually be diverted to recycling or composting. Is that not enough motivation to pause to sort carefully? 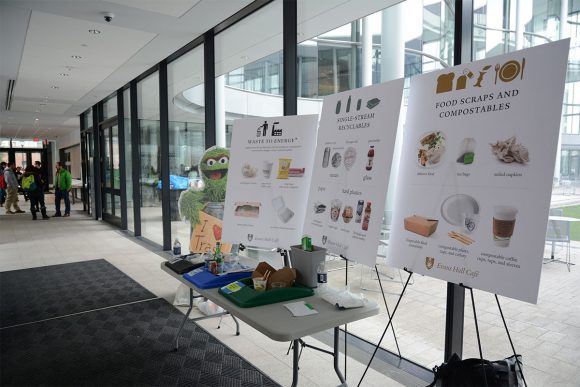 We began to create an event to make the impact of Evans’ trash felt and immediately tie the solution to the problem. We recruited the Yale Sustainability Office’s Materials Management team, a group of undergraduates  who brave snow and cold to sort through trash across the University and determine how contaminated the bins are (contamination is when recyclables go into trash, and vice versa). Ben Mattison of SOM Communications began mocking up signs and pictures of trash found around Evans Hall. Student Life purchased HazMat suits to help us increase the visual impact of Trash Bash, and Deans Jain and Scully happily agreed to don them to support the cause. Bill Peabody ordered a five-foot-tall cutouts of Oscar the Grouch. We came to learn the Evans’ floor plan as we visited these different offices, and were warmed by how the commitment to bettering the SOM community cut across all titles and departments.

On the day of Trash Bash, I walked around and listened to students’ reactions:
“Wait, we have to pay for our trash? But we get a refund for recycling?”
“Those cups are compostable?” “We can’t throw out batteries?”
“Is that Anjani in a HazMat suit?”

We explained the facts: trash costs $83 per ton, while we receive a $3 rebate for each ton of recycling. The cups are compostable if they come from Yale Dining (and say “Compostable” or “Plant-based”). Batteries are hazardous waste and can’t go in the trash bin. Yes, Anjani is really into composting, too. 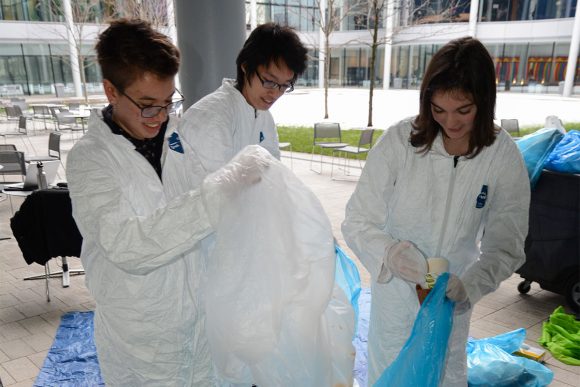 As the day wound down, two facts emerged loud and clear:

We had a long way to go. The Materials Management team reported that much of SOM’s trash contains compostables, and its compost is contaminated with trash. Half of the compostable lunch boxes had still ended up in the trash bin. Students were obviously not sure what could be composted, or where to do it.

We had buy-in. Students recognized the issues, and many asked whether composting would be available outside the dining facilities. Staff members pointed out areas in administrative suites that could use new signage. I heard one phrase over and over: “I always wondered what bin that was supposed to go in!”

Changing behavior is an uphill battle; humans, by nature, resist it. However, what we have seen so far encourages and compels us to move forward. Students and staff alike are stopping to read new signage; guests to Evans are pausing to sort their goods and are flipping over plates to look for composting or recycling logos. SOMers are voting with their time, taking a moment to not only do the right thing, but also to show publically that they prioritize sustainability. SOM is a living laboratory, and the experiments we work on here can reshape our actions. These actions can be carried forward as we bring sustainability initiatives to banks and international nonprofits, storefronts and Fortune 500s. For now though, we just have to keep making the simple choice to sort our trash properly, one plate at a time.